She is one of the world’s most acclaimed dancers, dazzling audiences with performances at the Bolshoi and the Royal Ballet. Now Natalia Osipova is fusing her centuries-old art form with the latest digital technology.

Osipova, principal dancer at London’s Royal Ballet and currently appearing as Giselle at the Royal Opera House, has created the world’s first non-fungible tokens (NFTs) for ballet that are being auctioned over the coming days.

The dancer said she was “excited but a little nervous” at her step into the world of NFTs and cryptocurrencies, but “I like taking risks and this is my latest venture”.

She added: “NFTs have shaken up the world of art, particularly over the last year, and I realised they could also broaden ballet’s appeal and reach.”

NFTs are unique digital assets stored on a blockchain. An NFT can be copied, but there is only one original, and blockchain technology means the origin and ownership is definitively established. NFTs can be sold and traded among collectors.

Osipova has performed three pieces, two from Giselle and one from the contemporary duet Left Behind, which she dances with her fiance, Jason Kittelberger.

Giselle, she said, was “my favourite classical role, beautiful and amazing”. Left Behind demonstrated more recent work combining “classical training in ballet with fluid contemporary dance and an emotional narrative”.

Together the pieces form Natalia Osipova: Triptych, which is being auctioned by Bonhams on 10 December.

The motive to create the NFTs was born during the Covid lockdowns. “I felt completely lost when I was unable to perform,” Osipova said. She decided to explore ways of connecting with audiences over a digital platform.

She and Kittelberger also plan to form their own dance company. “We’re hoping to find some financial independence by selling NFTs to fund the company,” said Kittelberger. “We hope to [build a] bridge over to the crypto[currency] community because they’re the ones who are actually investing.”

NFTs also create lasting artwork. Dancers’ careers are “really short”, said Osipova. “You stop about 40, maybe 45, sometimes earlier. I’m 35 now, and I can jump and my body looks good, and now is the time to record. Maybe in two years I can’t do the same thing. It’s sad but it’s true.”

Sales of NFTs have surged this year in what is often described as a new gold rush. The digital artist Mike Winkelmann, better known as Beeple, made history in March by selling an NFT for $69.4m. The same month, the musician Grimes sold a collection of NFTs for almost $6m.

Nyan Cat, a pixelated flying feline that became a YouTube meme sensation, sold as an NFT for $531,000 in February.

She said she hoped her NFTs would “pave the way for the next generation of dancers to connect with their supporters on this digital stage”. Dance was “the best language in the world” but the last two years had shown that “we need different platforms for people to see great art”, she said.

Osipova and Kittelberger said their venture was a “gamble” as the market for ballet NFTs was unknown. Bidding for the two short-form Giselle NFTs will start at £8,000 each, and the long-form Left Behind NFT will open at £30,000.

Nima Sagharchi, Bonhams head of digital art, said the auction house was “proud to be a pioneer in the NFT field – having sold works by creators of digital art and a record-breaking Cristiano Ronaldo NFT trading card – and to offer yet another world’s first.

“Through NFTs, we are able to crystallise unique performances, and own and collect what would otherwise be intangible.” 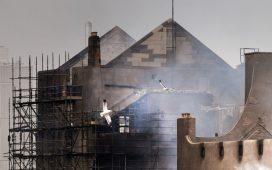 Falling for it: Alex Prager’s flights of fancy – in pictures