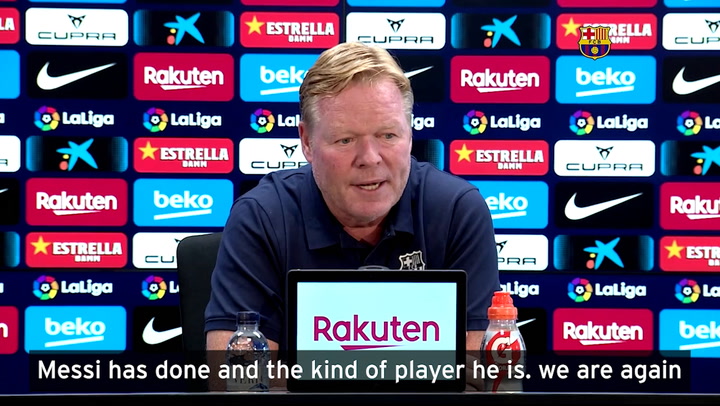 Koeman says Barcelona must move on after Messi exit

Ronald Koeman is reportedly relaxed about his future as Barcelona manager as the club may not have the funds to sack him.

The Blaugrana are enduring a torrid run that has seen them record just one win his five games, their latest being a 3-0 defeat to Benfica in the Champions League on Wednesday.

It is the first time Barca have lost their first two games at the group stage after Bayern Munich beat them by the same scoreline in their opener which has preceded mixed form in La Liga.

As pressure on Koeman mounts, the Daily Mail say that the former Southampton and Everton boss will be owed around €12 million (£10.3m) if the club choose to sack him.

Per ESport3, via Diario AS, half of that is due to a clause in his contract which states that Barcelona must reimburse him the €6 million (£5.1m) that the 58-year-old himself paid to the Dutch football association (KNVB) last year in order to be released from his deal with the Netherlands national team.

That part of his potential severance package is dependant on whether he spends two years in charge of the Blaugrana.

A pivotal player in the Barca side that won the European Cup in 1992, Koeman’s reputation in Catalonia has been soured since his return in August 2020.

TNT Sports report that Barca’s board will meet at 1:30pm UK time on Thursday to decide if they can indeed afford to sack the man who led them to the 2021 Copa del Rey.

President Joan Laporta met with directors Rafa Yuste, Ferran Olive and Ferran Reverter as soon as he returned from Lisbon following the loss in Portugal.

Despite the comprehensive result, the Dutch manager did not believe there was much between the teams, praising the hosts.

“Benfica were strong physically and they’re quick. I think that for the first and second goals we just had to defend much better,” Koeman said post-match.

“We had really good scoring chances and that’s how you change the direction of a match. The fact that Benfica put away the large majority of the few chances they actually created then that’s the big difference between the two teams.”

But the most damning indication of Koeman’s tenure in his admission regarding where this team are in comparison to previously Barcelona sides who won 22 trophies in 17 years.

Who should Barcelona choose to replace Koeman if he is sacked? Let us know your pick here.

“I’m not going to argue about the level of my team,” he stated. “There’s no point in comparing this with Barcelona teams of years gone by. That’s as clear as water.

“I can only give you my opinion of my work at the club – I feel backed by my players and their attitude,” Koeman added.

Midfielder Frankie de Jong is certainly publicly backing his boss, who coached him with the Netherlands, telling reporters: “I don’t think changing the coach is the solution.

“I can’t talk about Koeman, it’s not my place. We have to keep fighting, stay together and overcome this situation,” the 24-year-old affirmed.

“We can only escape this with hard work and being united as a team.”