Dasha Zhukova wrapped up against the cold as she was seen for the first time since it was reported she is expecting her first child with her billionaire shipping heir husband Stavros Niarchos.

The Moscow-born gallery owner, 39, who is the ex-wife of billionaire Chelsea football club owner Roman Abramovich, 54, joined Stavros, 35, for a shopping trip in the Swiss ski resort of St Moritz.

Any hint of a baby bump was hidden beneath Dasha’s chic winter outfit as the pair strolled arm-in-arm through the snow before popping into a high-end boutique.

The outing comes just three weeks after Page Six reported that Dasha and Stavros are ‘thrilled’ to be expecting their first child together.  Dasha already has a son, Aaron Alexander, 11, and a daughter Leah Lou, seven, with Abramovich, whom she divorced in 2017. 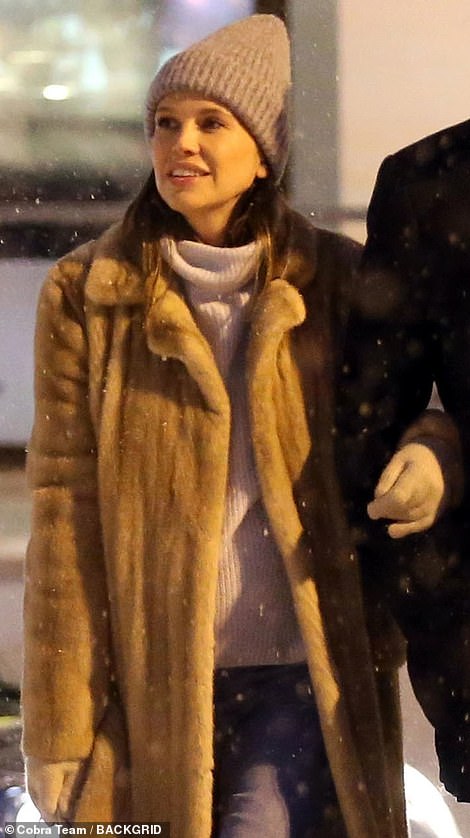 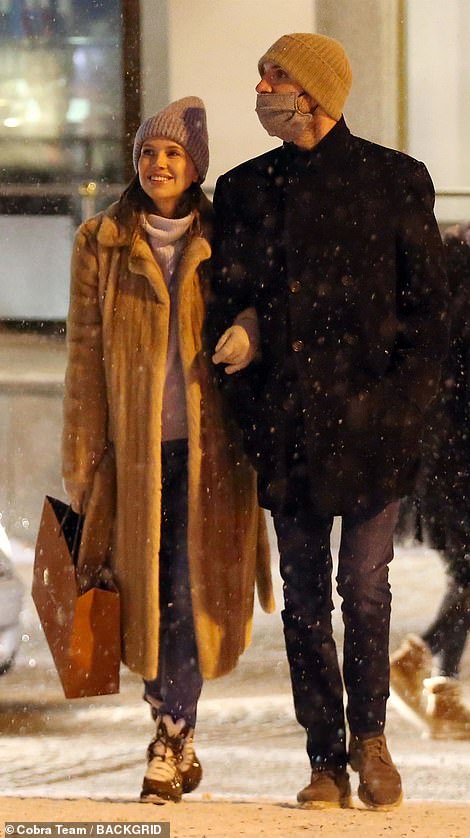 Dasha Zhukova has been seen for the first time since it was reported she is expecting her first child with her billionaire shipping heir husband Stavros Niarchos. The Moscow-born gallery owner, 39, who is the ex-wife of billionaire Chelsea football club owner Roman Abramovich, 54, wrapped up in a fur coat for a shopping trip with Stavros, 35, in St Moritz 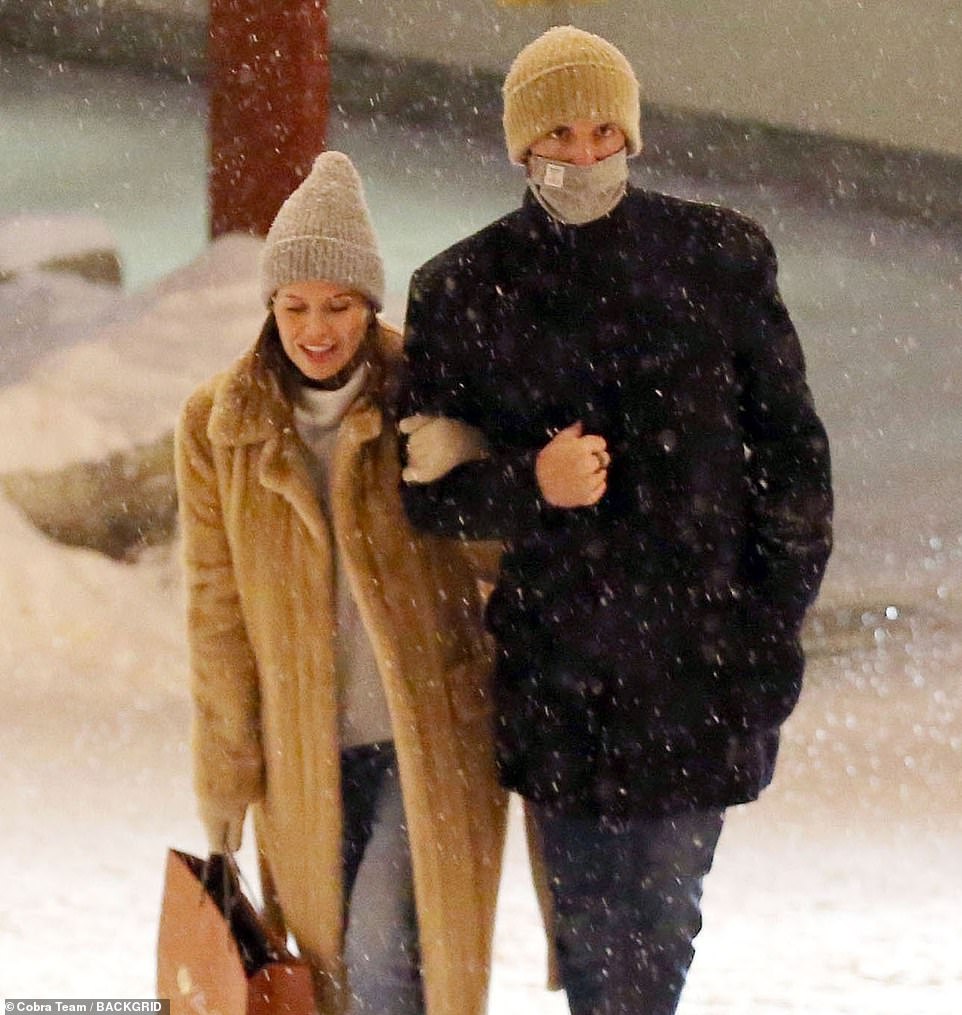 Wrapped up: Any hint of a baby bump was hidden under Dasha’s chic winter ensemble 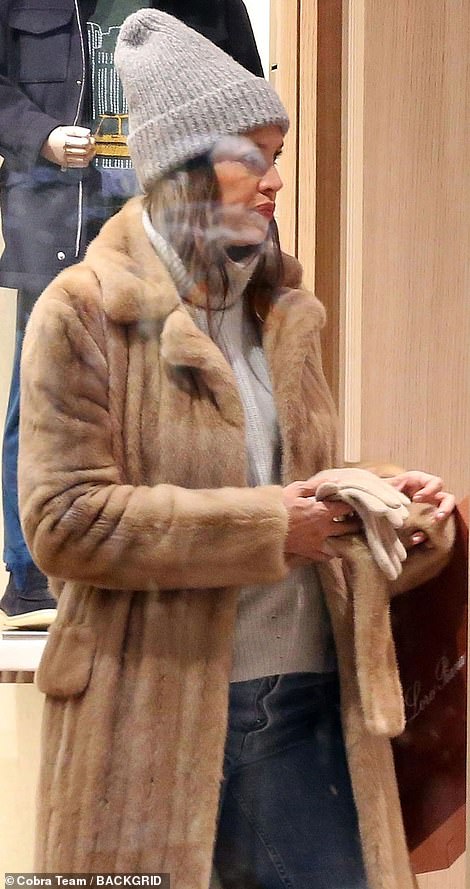 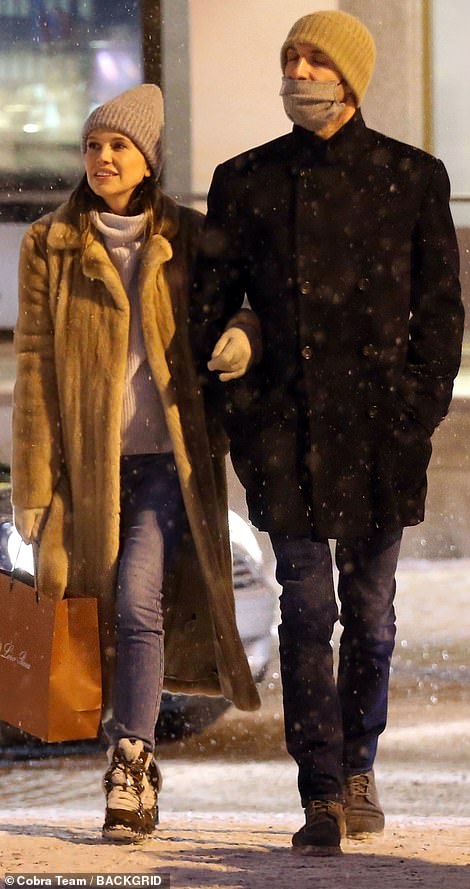 Winter walk: Dasha dressed for the chilly weather in a pair of snow boots, figure-hugging jeans and a cosy cream roll neck jumper, which she wore under a brown fur coat. She finished the look with a simple beanie and a pair of gloves 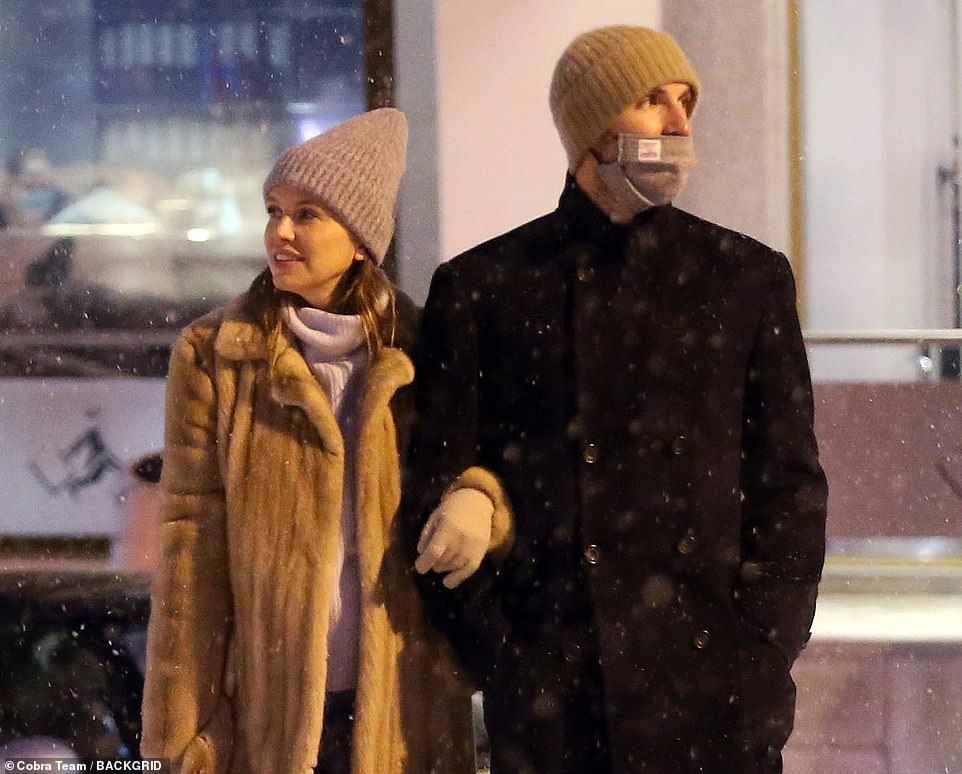 Loved-up: The couple strolled arm-in-arm through the snow before popping into an Italian boutique 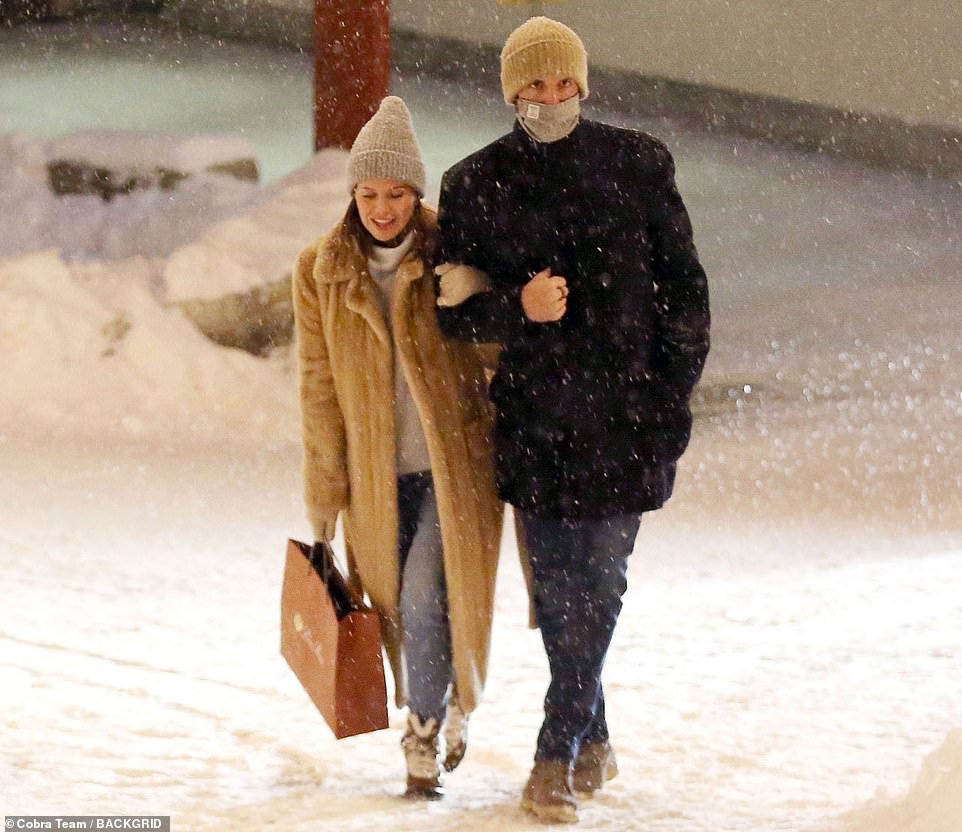 Arm-in-arm: It is the first time the couple has been seen since it was reported they are expecting their first child together

Dasha dressed for the chilly weather in a pair of snow boots, figure-hugging jeans and a cosy cream roll neck jumper, which she wore under a brown fur coat. She finished the look with a simple beanie and a pair of gloves.

Meanwhile Stavros, who is named after his late billionaire shipping tycoon grandfather, looked dapper in jeans and a dark coat. He wore a face mask on the shopping trip, although his wife did not.

The loved-up couple strolled down the street before popping into luxury Italian retailer Loro Piana. Dasha smiled as she emerged from the store with a shopping bag on her arm.

The visit will bring back happy memories for the couple, who tied the knot in the glamorous Swiss ski resort almost a year ago to the day. 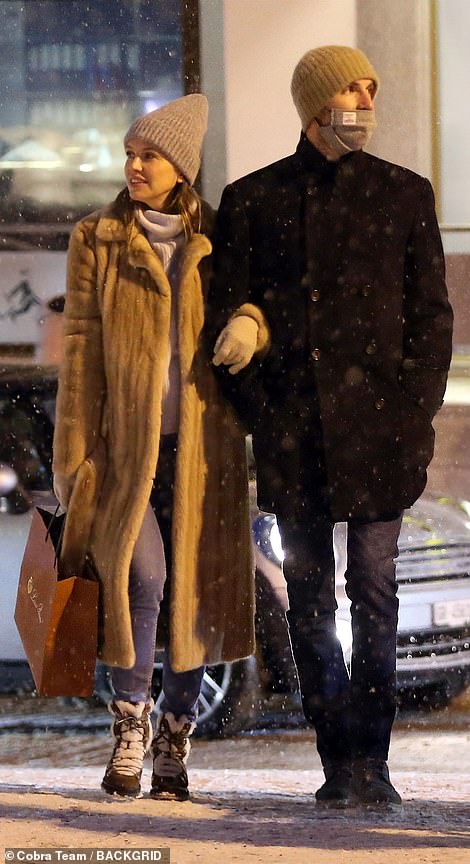 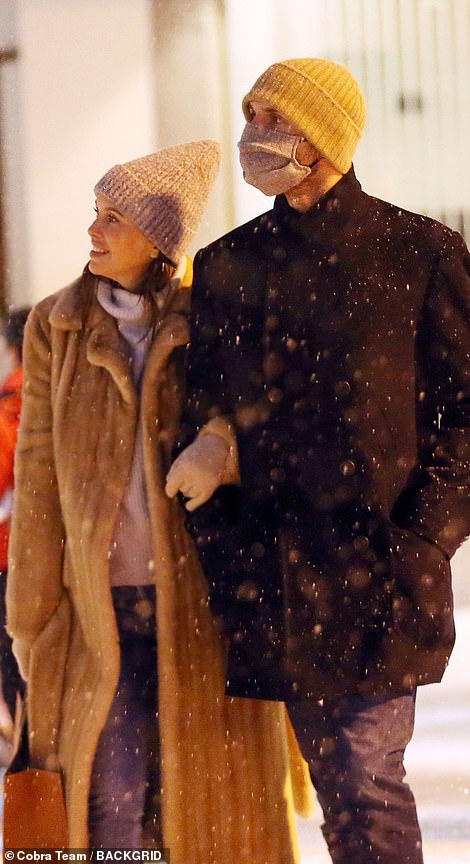 Anniversary: The visit will bring back happy memories for the couple, who tied the knot in the glamorous Swiss ski resort almost a year ago to the day

Something to smile about? Radiant Dasha appeared in good spirits as she headed out with her husband 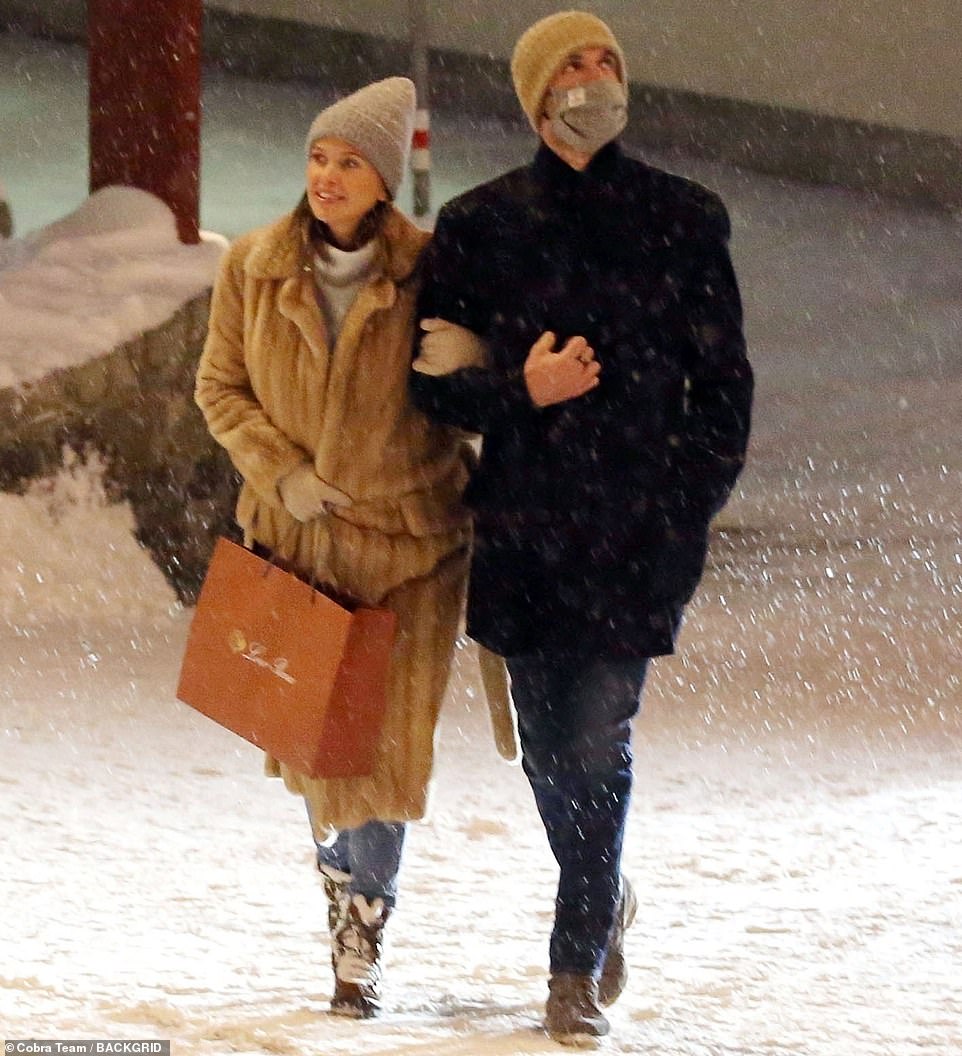 Winter wonderland: Dasha and Stavros admired the snowfall as they emerged from the shop in St Moritz

Pared back perfection: Natural beauty Dasha kept her makeup to a minimum as she joined her husband for the outing 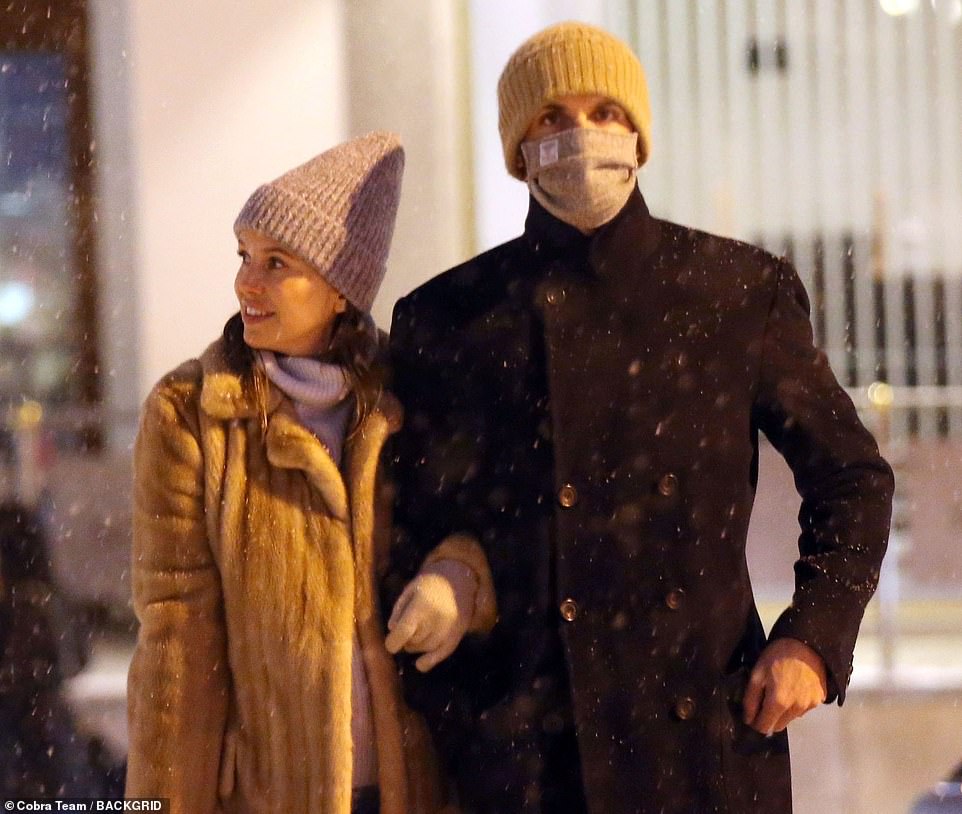 Fresh-faced: Dasha looked delighted to be out with her husband in St Moritz, which is where they wed a year ago

New purchases: Dasha emerged from the shop with a bag on her arm and pulled on her gloves as she stepped outside 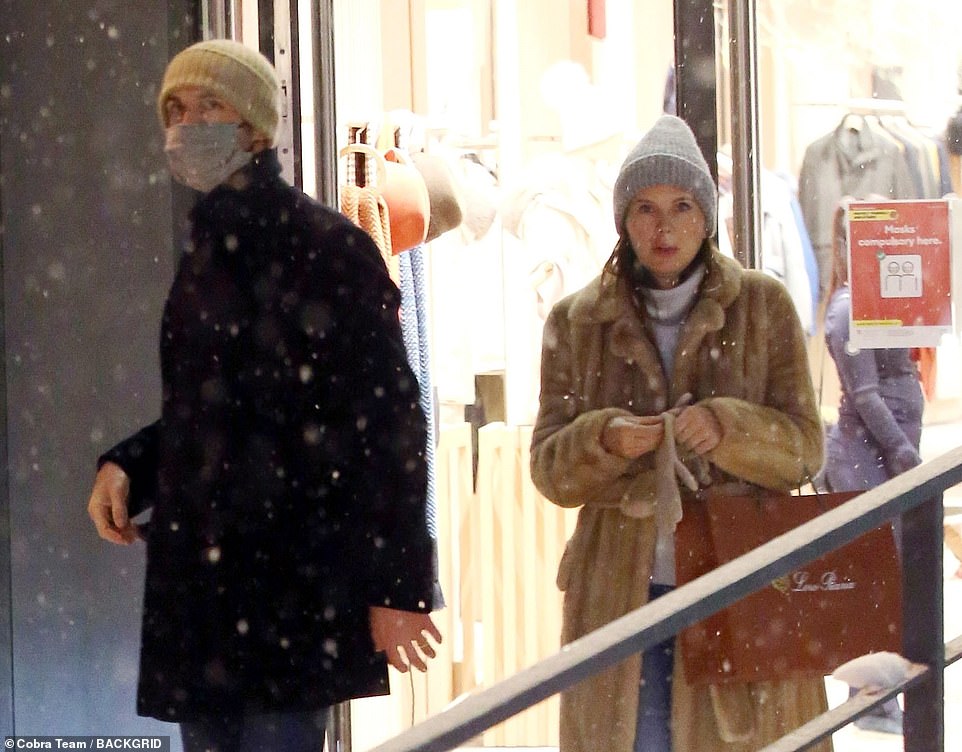 Newlyweds: Dasha and Stavros, who have known each other for more than a decade, married in St Moritz last year

Dasha and Stavros had been friends for more than a decade but became a couple after her nearly 10-year marriage to Abramovich came to an end in 2017.

Stavros’ most high-profile romance to date was with socialite and hotel heiress Paris Hilton, 38, who he dated from late 2005 until March 2007.

The businessman, who is part of the Greek shipping Niarchos dynasty, was also in relationships with actresses Lindsay Lohan and Mary-Kate Olsen, and model Jessica Hart.

Upon their split, Dasha and Roman said they were committed to jointly raising their children together and working together as co-founders of the Garage Museum of Contemporary Art and the New Holland Island cultural center in St Petersburg.

The settlement included the transfer of over $92 million worth of property to Dasha – including a four-storey mansion in Manhattan. 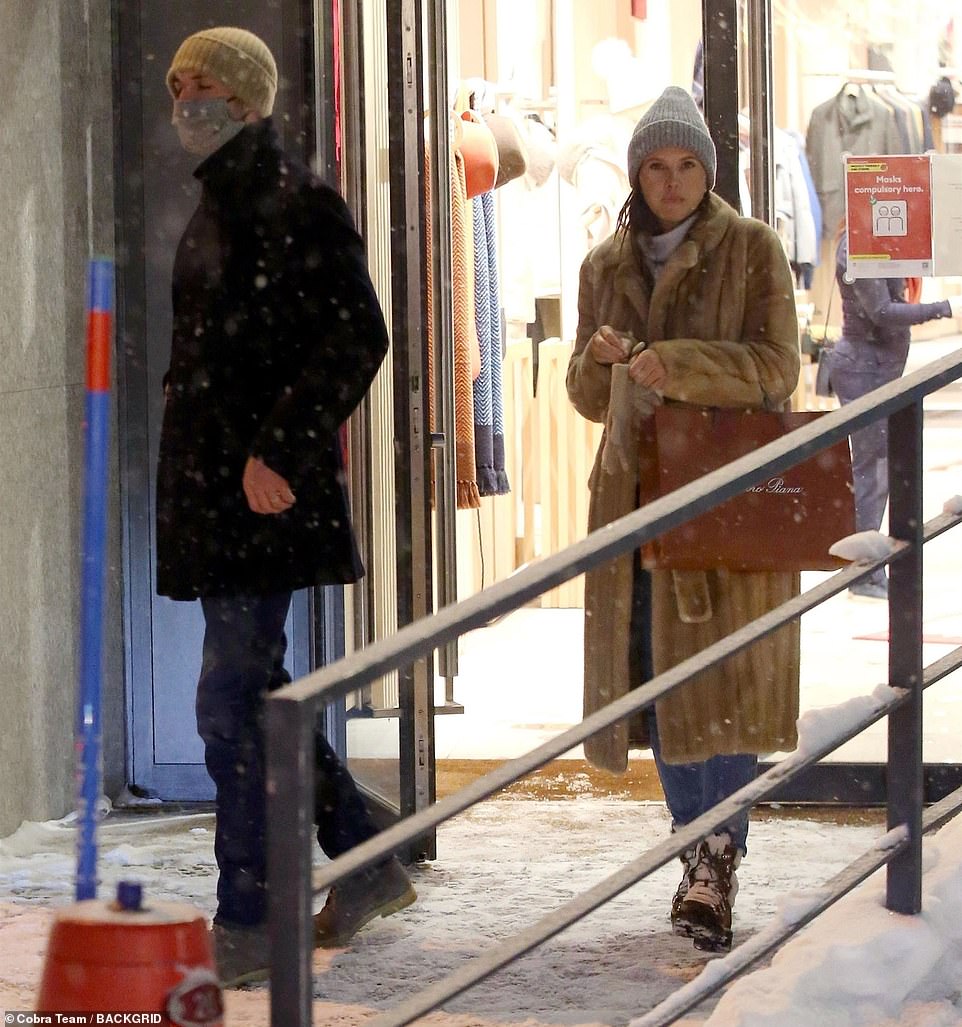 Keeping things cosy: Both Dasha and Stavros wrapped up in winter coats for the shopping trip 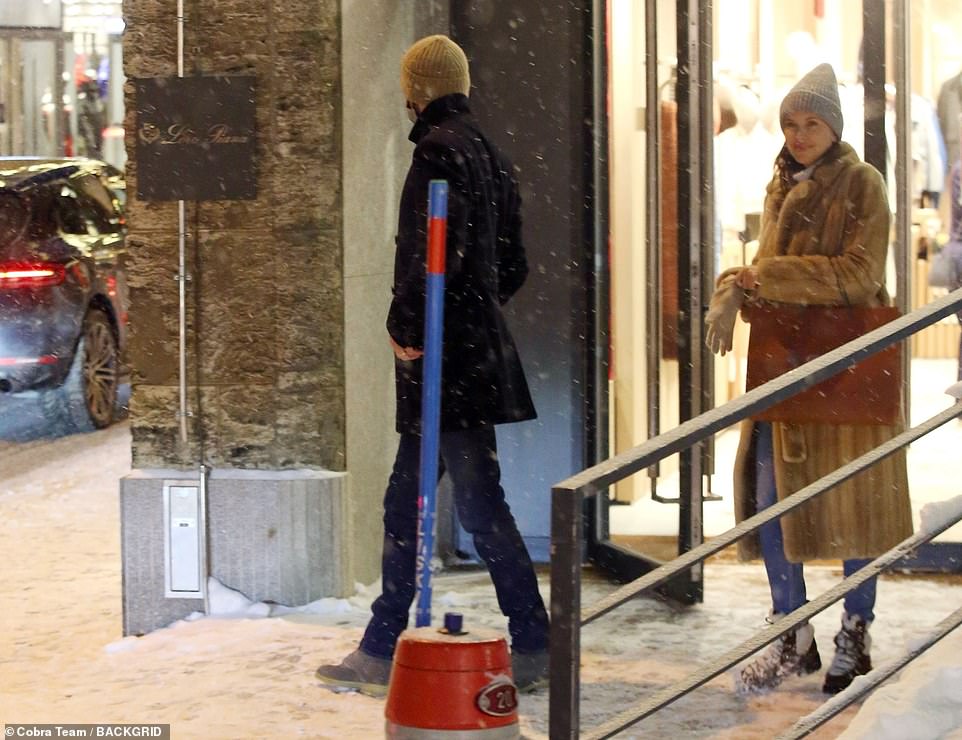 Next stop: The couple smiled as they left the store and headed out into the chilly weather 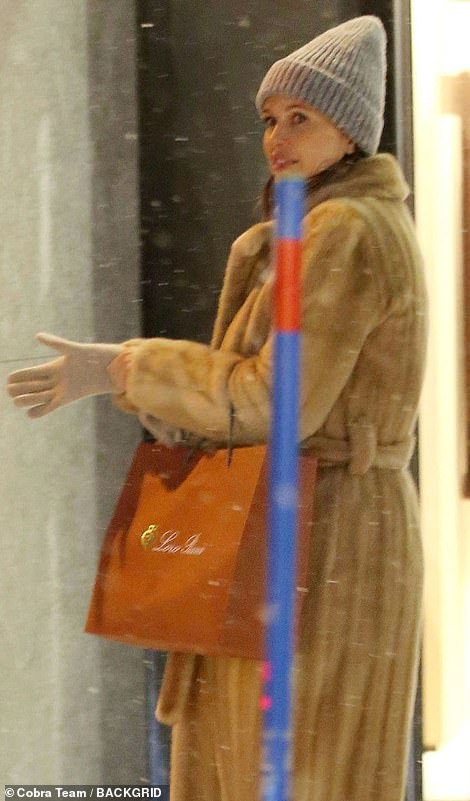 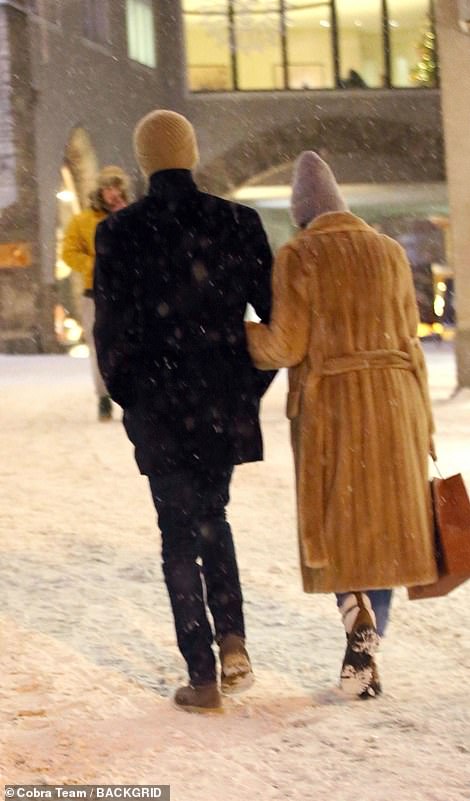 Essential accessories: Dasha pulled on a pair of gloves before taking her husband’s arm for their stroll 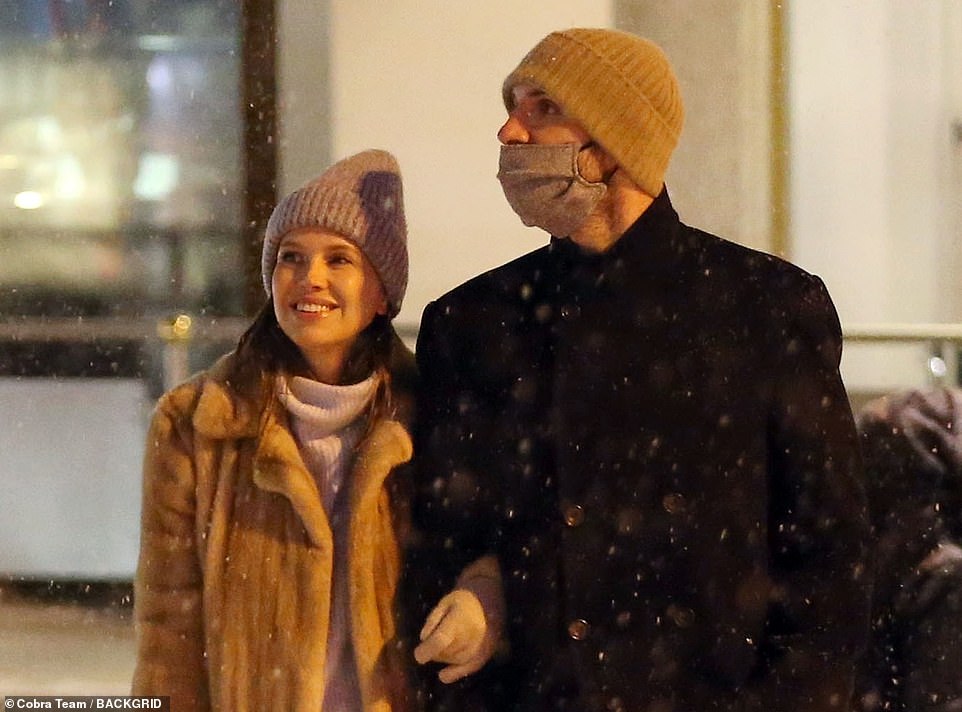 Flashing a smile: Dasha beamed as she chatted with Stavros on their stroll through St Moritz 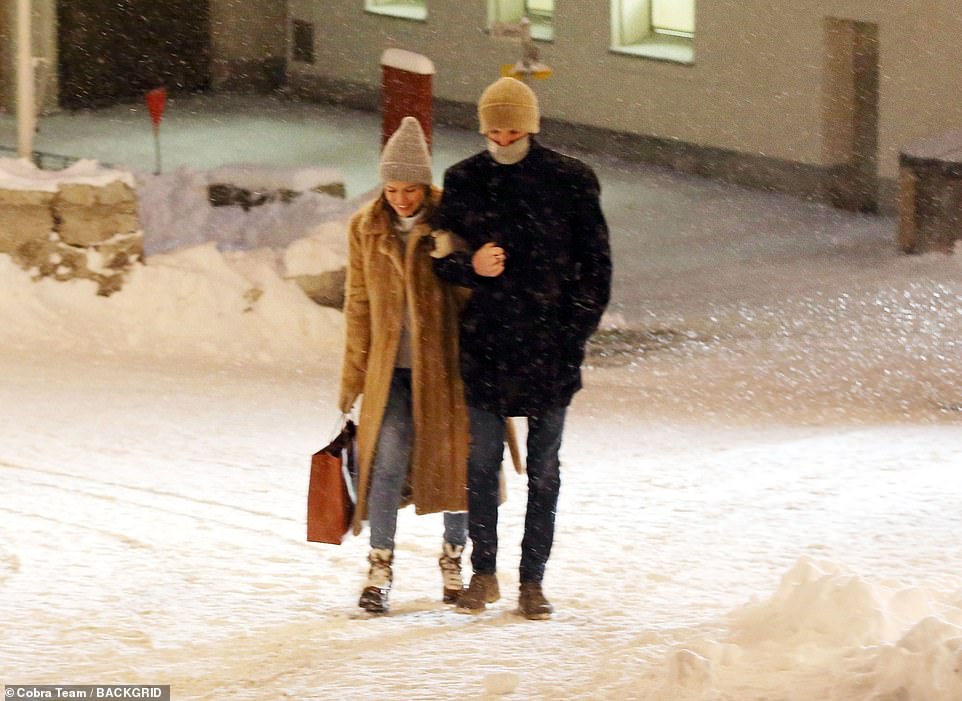 Let it snow! The ski resort was covered with snow – perfect for a romantic stroll

Stravos and Dasha have been close friends for a decade but Vanity Fair Espana first picked up on the relationship in August 2018, just after the split between Abramovich and Zhukova was confirmed in a statement.

Dasha and Stravo’s relationship was all but confirmed back in January 2019 when he spent New Year’s Eve with her friends in Peru.

Sources then revealed in July of that year that the couple were engaged, with one telling Page Six that they were openly discussing their plans to marry with friends at her birthday party in New York City.

Royalty, Hollywood and some of fashion’s most famous faces were present at the couple’s wedding in January when they married in a specially erected marquee close to the main ski jump Olympaschanze. 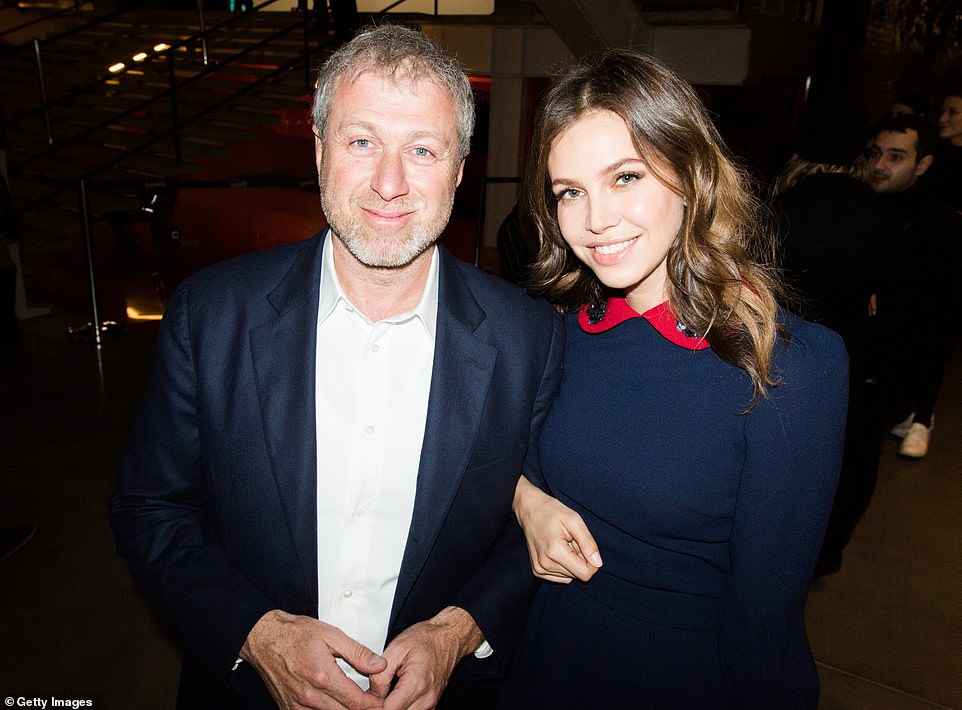 The Moscow-born heiress is the ex-wife of Chelsea owner Roman Abramovich, with whom she shares two children: son, Aaron Alexander, born in 2009 and daughter, Leah Lou, born in 2013 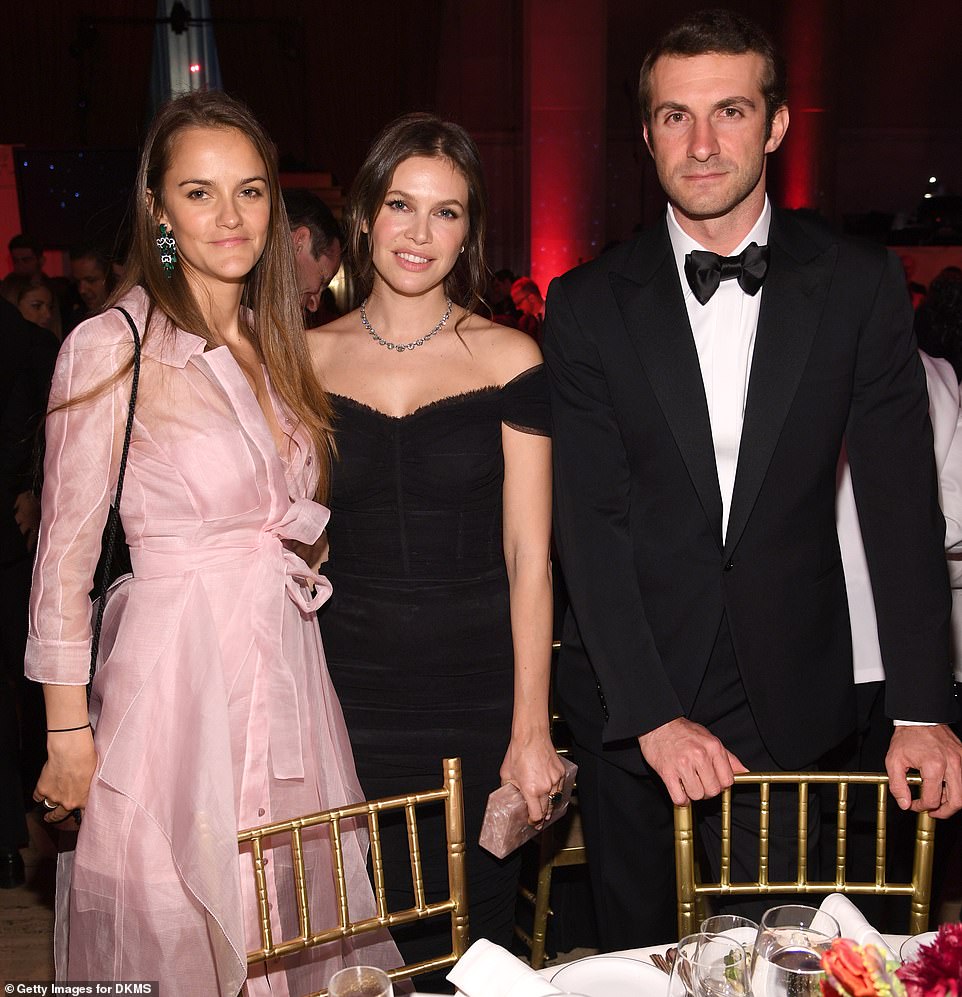 Black tie:  Dasha, centre, with Stavros and Charlotte Santo Domingo, at a New York gala in 2018 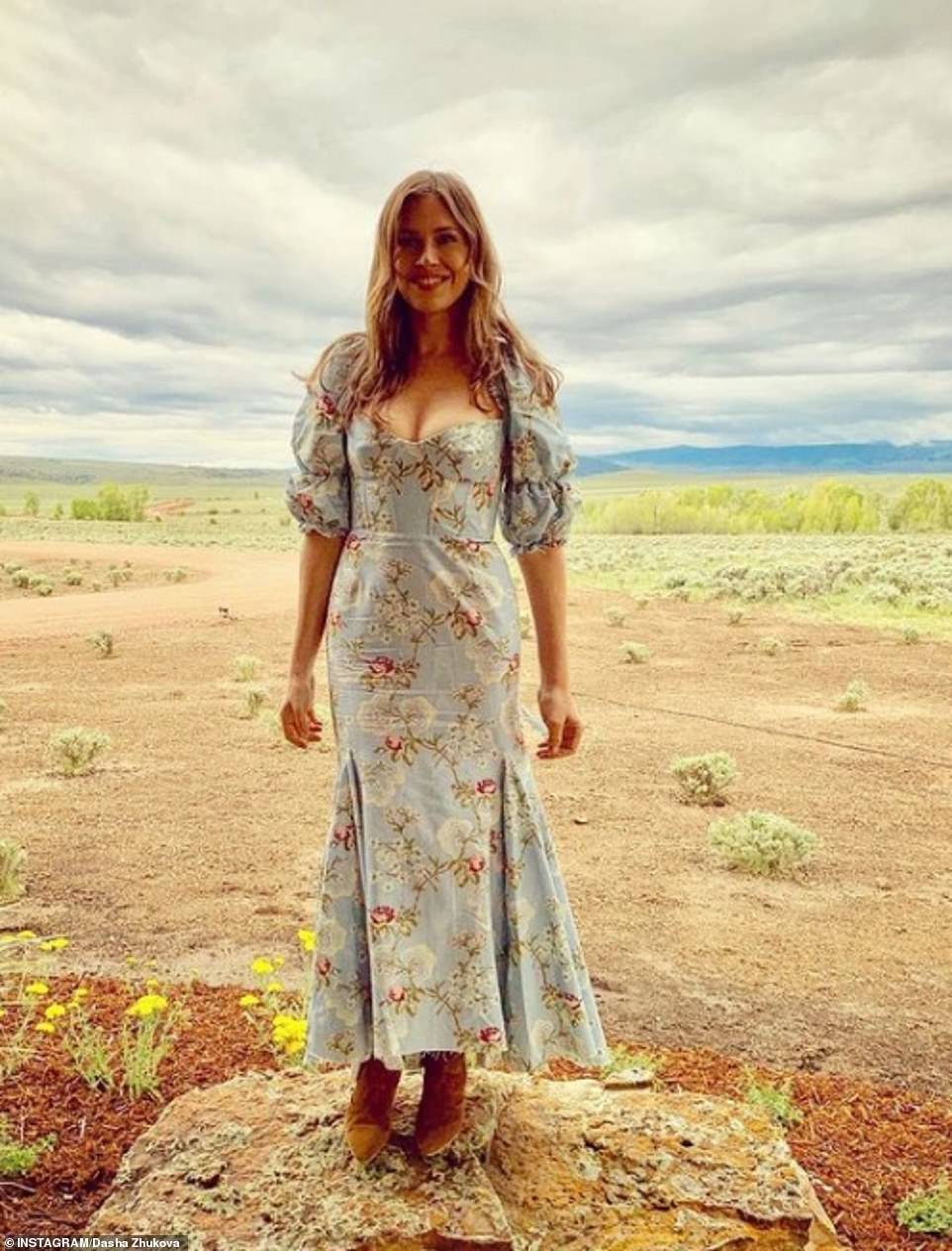 Dasha and her new husband are said to be ‘thrilled’ about the pregnancy, after marrying in a star-studded ceremony in January

Pictures of the nuptials were not released at the time but have since emerged, showing the glamorous bride wearing a stunning white gown with a chic embellished coat over the top.

Her new husband meanwhile looked dapper in a navy suit, complete with a white rose pinned to his lapel.

In one picture the couple are seen with the mayor of St Moritz, Christian Jott Jenny.

The £6 million Swiss leg of the marriage was held 24 hours before scheduled with guests keeping the timing a secret with the main celebration was at the Kulm Hotel.

The bride was given away by her father Alexander Zhukov, 66, a Russian businessman who is a British citizen. 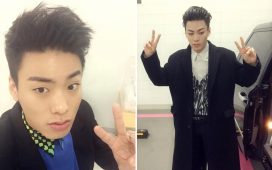 Who was South Korean rapper Iron and how did he die?

US exploring new bases in Saudi Arabia amid Iran tensions 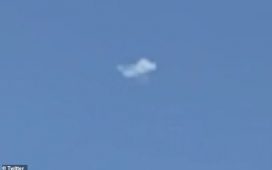 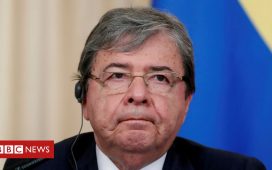