It’s remarkable to think that the average Rolls-Royce buyer, at just 43, is younger than the average Mini buyer within the BMW Group. A key part of that phenomenon has emerged within the past five years with the launch of the Black Badge model range, which has really now found its niche, particularly among younger buyers in the world’s emerging megacities.

The Black Badge treatment, which came first on the Wraith in 2016, now arrives on the second-generation Ghost. It is no mere sporty trim level or special edition with a black paint finish, a tin of gloss black paint applied to the brightwork and a bit more power and a Sport driving mode.

No, said brightwork, for example, is all still chrome. It’s just had the chemical formula tweaked to come out in a darker shade, most notably seen on the darker grille and Spirit of Ecstasy.

And you can have the car in any of Rolls-Royce’s 44,000 paint colour options, although black remains the most popular choice. There is more power, too, and a new driving mode that does things like sharpen gearshifts and throttle response, but don’t call it a Sport mode: it’s called the ‘Low’ mode and is accessed by a button on the column shifter. 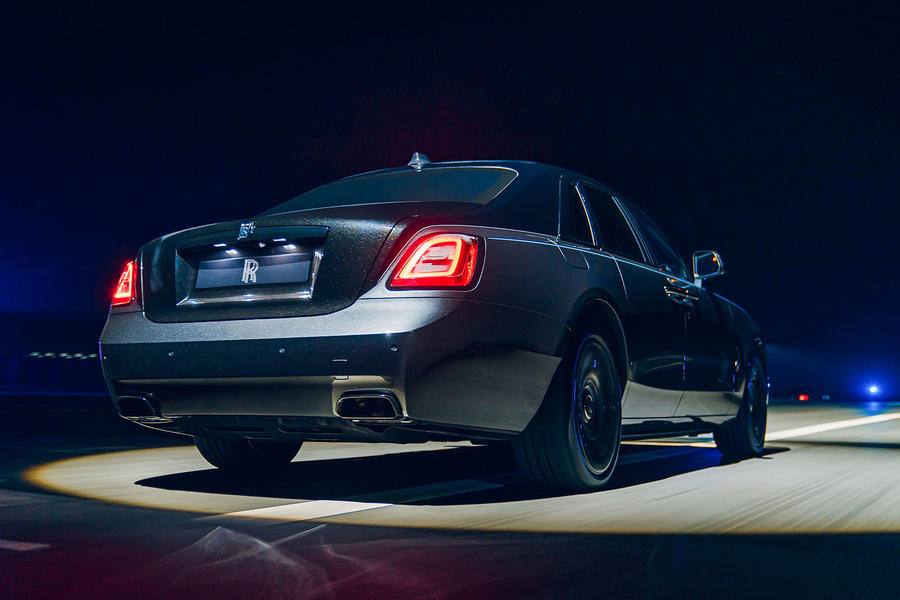 Fittingly, our test drive was under the cover of darkness. (It was done before the Ghost Black Badge had even been revealed to the wider world, thus keeping the car from prying eyes.)

It started with a blast up a closed Northamptonshire runway to see the difference in right-foot urgency between ‘normal’ and Low modes, including the 50%-sharper gearshifts and the full force of that extra 29bhp and 37lb ft boost over the standard Ghost’s mighty twin-turbocharged V12 engine. The force at which one’s posterior was wedged backwards into the most sumptuous of driver’s seats told the story.

Our test route that followed was short, and mixed in some back roads leading to the Oxford ring road before heading down the M40 (probably not the average Black Badge owner’s typical Wednesday evening drive) and didn’t show up any huge dynamic differences between the standard Ghost and the Black Badge.

Which means it’s pretty exceptional: quiet, comfortable, oh so refined, and a good deal more manoeuvrable than the larger Phantom. The rear-wheel steering system in particular is worthy of praise in helping the Ghost to feel not quite the full 5.5m in length.