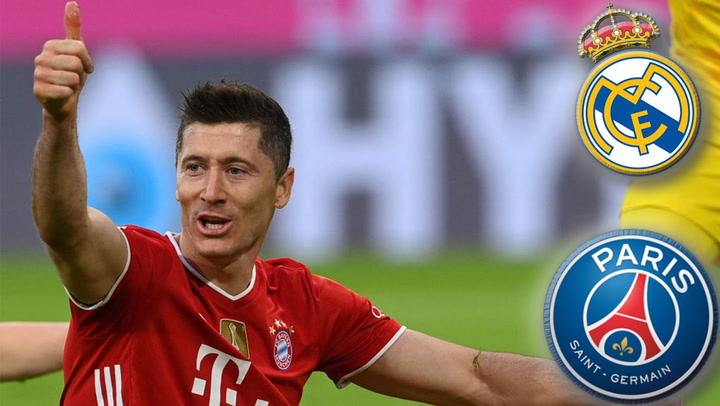 Robert Lewandowski: All you need to know about Polish striker

Robert Lewandowski is a classy operator on the pitch and the Bayern Munich star carried himself in the same manner after he was beaten to the 2021 Ballon d’Or by Lionel Messi.

Messi claimed his seventh award after receiving 613 points in the voting, with Lewandowski not far behind in second on 580.

Chelsea ’s Jorginho came in third with 460 points, ahead of Real Madrid’s Karim Benzema and his Blues team-mate, N’Golo Kante.

The Pole has been in sensational form over the past two years and would have been a strong favourite for the 2020 award had it not been cancelled due to the coronavirus pandemic.

He scored 41 goals in the Bundesliga last season in just 29 appearances to break Gerd Muller’s long-standing record of 40.

But it was not enough to usurp the Argentinian magician Messi, who guided Argentina to their first international trophy in 28 years by winning the Copa America.

He also scored 30 goals for Barcelona as the Catalan giants finished third in La Liga, and lifted the Copa Del Rey before sealing a summer switch to Paris Saint-Germain.

However, Lewandowski was gracious in defeat and the 33-year-old paid tribute to Messi with a post uploaded to social media.

“To start, I would like to congratulate Lionel Messi, Ballon d’Or Winner,” he posted on his Instagram.

“I want to thank every single journalist who voted for me, and believed that my achievements were important in 2021.

“I won Striker Of The Year Award and no player can win an individual award without the strongest team and loyal fans behind him. And for me it’s no different.

Have Your Say! Did Lionel Messi deserve to win the 2021 Ballon d’Or? Comment below.

Lionel Messi won the Ballon d’Or for the seventh time
(

“I want to thank my club Bayern Munich for the platform they’ve given me to succeed and to achieve my dreams.

“And the most important thing, huge thanks to my family. Thank you Mom, thank you Anna – you are the love of my life and my best friend, thanks to my sister Milena and to my friends and management team for the continuous support, the foundation of my achievements.

He had collected the honour for a record sixth time in 2019 — one ahead of Cristiano Ronaldo — before the awards were cancelled in 2020 due to the coronavirus pandemic.

Ronaldo did not attend Monday’s event at the Theatre du Chatelet in the French capital but responded to Ferre, the editor of France Football – organisers of the Ballon d’Or, on social media.

“Pascal Ferre lied, he used my name to promote himself and to promote the publication he works for,” Portugal international Ronaldo posted on Instagram.

“It is unacceptable that the person responsible for awarding such a prestigious prize could lie in this way, in absolute disrespect for someone who has always respected France Football and the Ballon d’Or.”

Cristiano Ronaldo could only finish sixth in the standings
(

Barcelona and Spain midfielder Pedri won the Kopa Trophy, the award presented to the best-performing player under the age of 21.

The 19-year-old was selected immediately ahead of England and Borussia Dortmund midfielder Jude Bellingham, while Manchester United’s Mason Greenwood was fifth and Arsenal’s Bukayo Saka sixth.