Robert Downey Jr has finally addressed mounting speculation that he could make a comeback as Iron Man in new Marvel movie Black Widow.

He didn’t confirm it, but he also didn’t deny anything either, meaning we’re still going to go ahead and have our fingers crossed that Tony Stark will be living and breathing on the big screen once more.

Yup, we’re still not over him sacrificing himself to defeat Thanos and any thin slice of hope that we can see Tony alive and kicking is one our little hearts are going to hold onto.

Speaking to Entertainment Tonight, Robert teased: ‘Right. Great. I mean, it would be nice if they notified me.

‘Forewarned is forearmed. They can do anything now. This could be a deep fake interview for all we know.’

While he may joke that Marvel bosses haven’t been in touch, it’s been heavily rumoured that Iron Man will join Scarlett Johansson in Black Widow, a prequel which follows the events of Captain America: Civil War (2016) and delves much deeper into her character Natasha Romanoff.

It’s not hugely unrealistic for Robert to appear, either, as Marvel characters are known for popping up here, there and everywhere throughout the franchise – even if he has said he’s ‘hung up his guns’ for now.

‘Anything could happen,’ Robert said of his Marvel future in an interview with Extra TV, before adding: ‘As far as I’m concerned I’ve hung up my guns and I’m good to let it go.

‘I also think Marvel is on this journey now where they’re trying a bunch of other stuff. I’m excited for them to see how it all goes.

‘It’s hard to project but we got a lot of other stuff we want to do. The war for me is over. I personally have alighted to greener pastures.’

Either way, fans are expecting one hell of a reunion in Black Widow as the film, that will give fans a look into Natasha’s past as an assassin before the events of Endgame, includes a series of flashbacks with Nick Fury (Samuel L Jackson), Hawkeye (Jeremy Renner) and Thaddeus Ross (William Hurt).

MORE: A National Treasure 3 is happening and Disney are behind it 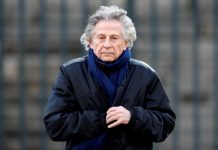 Filmmaker Polanski will not attend 'French Oscars' in Paris over criticism