Many retailers are bracing themselves for a potentially sharp contraction in spending later in the year as food and energy bills rise, citing forecasts that the UK will endure the highest inflation of any industrialised country.

However Moonpig, an online retailer of customisable cards and gifts, said it had so far seen little discernible impact on profit margins from raw material inflation and that it did not expect existing customers to alter their shopping habits.

“We have 22 years of data in the card business, we’ve been through the downturn in 2008-10 and we’ve seen all the numbers from the last few months,” said chief executive Nickyl Raithatha. “We’ve found no evidence at all that the card business is being impacted by economic conditions”.

Although he acknowledged that budget-conscious consumers might opt for cheaper gifts, Raithatha predicted they would cut back on more expensive discretionary purchases first, citing a relatively low average order value of £7.70.

He also said that the behaviour of customers acquired during the pandemic, which forced many bricks-and-mortar shops selling greetings cards to close and curtailed in-person celebrations, was “close to identical” to previous cohorts in terms of order frequency and average spend.

However, Moonpig shares fell 7.5 per cent in early trade to more than a third below their February 2021 initial public offering price of 350p.

Sales in the year to the end of April were down 17 per cent to £304mn as expected following an extremely strong previous year, although pre-tax profit rose 21 per cent to £40mn.

Citigroup analyst Ajay Nandal said the full-year numbers were slightly ahead of market consensus but added that he saw few short-term catalysts for any upgrades.

Meanwhile, B&M, a variety discounter that sells homeware, consumer goods and toys, said it also expected to retain customers won during the pandemic and maintained its prediction for full-year underlying profit of between £550mn and £600mn — almost 70 per cent greater than pre-pandemic levels.

The company has previously argued that discounters tend to gain market share during downturns as consumers look for ways to cut their outgoings. It too has low average basket sizes and the vast majority of its product lines cost less than £20.

Sales declined in the first quarter, mostly due to very strong comparative figures for the same period last year, but the decline was less than analysts had feared.

Group sales were down 2.2 per cent at constant exchange rates, while sales in the core UK market were down 9.1 per cent. Most of that decline occurred during April because B&M’s sales in the previous year were boosted by a lockdown that forced many other shops to close.

Liberum analyst Adam Tomlinson said the update was “as positive as we could have hoped for” and added that upgrades to forecasts were possible in the coming months.

Shares in B&M rose by just over 1 per cent in early trade. However, the group’s market value is still around the same as it was before the pandemic despite the increase in profit levels. 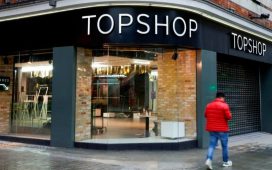