A RESCUED orangutan is learning to climb again after developing a fear of heights in captivity.

Five-year-old Kukur had been tied up and kept in a hut.

He made a timid start at a rehab centre in Borneo but grew in confidence with other apes.

Alan Knight, of International Animal Rescue, said: “We can’t replace his mother but, with coaxing from the keepers and his orangutan friends, he is starting to develop skills ready for a return to his rightful home.”

Last year a wild orangutan was snapped offering his hand to try and help a human who was in a snake infested river.

A rare albino orangutan was also pictured in the Borneo rainforest.

‘Depraved and ruthless’ trucker, 34, killed stranger who offered a favour then moved into her home 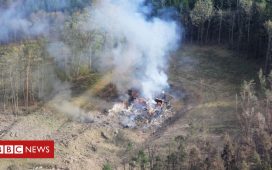