Wandering around the magical grounds of Chatsworth House expect plenty of sheep, pristine gardens, magnificent water features and a smattering of Gucci. Yes, you heard that right. Gucci. As of this week, a new work of art lives inside a grotto on the grounds of Chatsworth House and it’s all part of a new Artist in Residence project by the fashion house and the stately home. 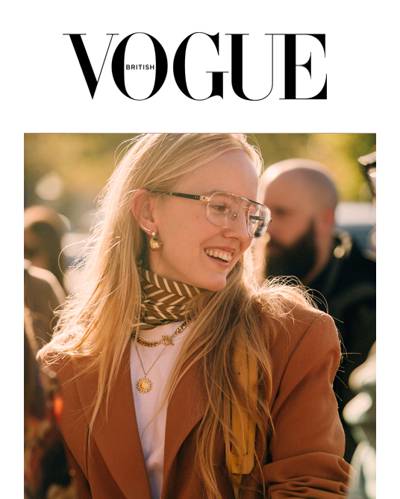 Get the best of Vogue delivered to your inbox daily. Sign up to the Vogue Daily newsletter now.

Thank You. You have successfully subscribed to our newsletter. You will hear from us shortly.

Sorry, you have entered an invalid email. Please refresh and try again.

The renowned American artist Rachel Feinstein upped sticks and moved into the residence of the Duke and Duchess of Devonshire for a period of time in June and October 2018. The result: A larger than life sculpture called ‘Britannia’ which is described by the artist as a Roman personification of the British Isles. It’s difficult not to think of another ‘B’ word (ahem, Brexit) upon hearing the title of Feinstein’s work. But as with any work of art, it’s open to interpretation.

The Flowering Of Florence’s Gucci Garden

Chatsworth, just two hours by train from London, is unlike anywhere else in the world. To say Feinstein was inspired by her time there would be an understatement. And after spending an evening in the estate for the unveiling of her work, it’s easy to see why. The Duke and Duchess have all sorts of collectibles in their home – from funky ceramics to sculptures of dogs made out of chocolate.

‘Britannia’ will be on display in Chatsworth Garden to members of the public for the next five years. Vogue caught up with Feinstein to find out more:

What was it about this particular project that attracted you to it?

I’ve always had a fascination with the idea of America vs Europe. My interpretation of everything here [in Europe] was that it was better and more thought out and done with much more care. The thing about Chatsworth House is that it has been hundreds of years of taking the time to make everything exactly right. When I was driving around the garden of the estate in a buggy, I said to the Duke to look at a clump of what looked like weeds and flowers. But of course they weren’t. And I said “that’s on purpose, isn’t it?” And he said “of course it is, everything is on purpose”. That intrigued me very much, the idea of hundreds of years of cultivation, but done in a way that looks like it was effortless.

Tell us more about your time at Chatsworth House and the journey you’ve been on to unveiling these works of art?

I just remember being struck by how romantic and dramatic the landscape was when I first arrived here. We went around the garden together and we all stuck to the grotto right away. The Duke and the Duchess were the ones who said that it had been neglected, and that it would be wonderful to have something beautiful inside the grotto. We walked inside and I looked at all of the minerals that Lady Georgina put in there to reflect the light and I saw remnants of old candles that maybe had burned there… it was just a very beautiful moment.


Was there anything in particular that influenced you?

The Duke loves ceramics, you see them all around the house. So I knew I was set on doing a ceramic piece verses a steel or a bronze or resin one (which I had worked on before on another piece in the garden, the Roccoco Hut). I had also started this amazingly productive time with Nymphenburg [a porcelain factory in Germany], and I just knew that was going to be the right material. If you go around the [Chatsworth] garden you see the old stone structures that are all dark and grey. They were originally more white, and that whiteness kind of interested me.

So I started doing these little mock-ups of women, these sexy, beautiful women that had their arms up that were sitting or standing. Gucci photographed me with [sketches of] the images that I was going to do. Then, on my last afternoon the Gucci photographer, Samuel Keyte, wanted to see where the grotto was. We went down and he took some pictures of me in front of it, and I said “can you take a picture of me inside so I can just see the scale in relationship to my size, how big I have to actually get.” I was wearing this incredibly beautiful rainbow, Gucci dress, full-length. He sent me the pictures after we were done, and I said “oh my god, that’s it!” I have to make it a colourful sculpture.

So Gucci was a really pivotal part of this whole process?

I wrote to Alessandro (Michele) immediately after it [Britannia] was installed, with pictures of the images Saumel first took of me in that dress and the final pictures of what Britannia looks like. And I said “I really, really want to thank you, and I really would love for you to see this in person” because, looking at the dress that he did and the sculpture, they’re definitely tied together. It’s in relationship to the way that the inside of that grotto feels and how ghostly it is, and how the light is so magical and fairy-like… it’s the folly of making something that’s beautiful, but also in a way, very sad to me. You know, caves are not happy places. If you saw that sculpture in a white gallery it would have a very different feeling. It’s that whole experience of everything. It’s me, Gucci and Chatsworth – the combination of those three things that somehow snaps it all together.

As an artist, how do you feel about your work being experienced via Instagram, rather than in real life?

In a lot of ways the queues have gotten longer for the great masterworks like the Mona Lisa, because people have to instagram themselves with the actual Mona Lisa. I wonder if they are really having the experience or trying to document the experience to show the world that they’ve been there. It’s a very convoluted moment. But I can’t complain because I’m happy that they’re coming. However Britannia is in a garden, not a museum. You have to physically be inside a garden, to walk through it, to experience the smells and the bugs and the heat. There’s no way you can make that up.

I agree… but there really is no way to understand what it feels like unless you’re standing there. Especially with sculpture. Sculpture is all about the body and the confrontation of your physical presence to this physical presence of this object, it gets in your space. And the other idea of having it be closed off within the grotto, not just for safety reasons, because it’s a large ceramic work.

Is “Britannia” a nod to Britain in any way, given the interesting times that we’re living in?

Originally the title comes from the Royal Derby porcelain sculpture that’s at the V&A. I want people to see that that’s the reference. It’s that nod to the people who came before us. They knew stuff. Whatever you think is happening in our world, it’s been done before – except for the internet and this whole giant highway of information.

So, Britannia – using that title [was] on purpose; for people to look into her history and background. She’s also in this in-between stage of life, which I feel like I’m at. I remember what it was like to be 20 year years old, and now I’m 48 and I’m just wondering what the next stage of life is going to be. So it’s a reference to mortality, and life and death.

5 Things To Know About Gucci Cruise 2020

It’s hard these days to do anything regarding the UK and not think of Brexit. How do you feel about that?

The truth is that the politics of the world I find really depressing. I don’t really know how to express it except to make beautiful things that hopefully allude to that feeling. My way of dealing with it is trying to make art to not just make you think about it, but also take a rest and maybe not think about it as well. People can interpret it how they want.

Gucci is a Florentine house, and Florence was home to the Medicis who were famously patrons of some of history’s most important artists. How do you feel patronage has evolved over time, and where is it now?

In the past it was the Church and the Medicis that held this great, lively competition. It was based on who was the best, who was the most talented. I think a lot of great artists have great ideas, but unless you have the support to make these things, those ideas will die with them, and making art is a huge folly [in terms of the cost of it].

You don’t need art to eat, you don’t need art to cover yourself at night, or to have a house, but you need the escape and you need to have the experience of something other than your mundane life of eating and shitting and this and that, and that’s what a patron does. He or she is the vehicle that provides for that dream to become a reality. It wouldn’t happen if it wasn’t for them.

How technology will impact the future of fashion design

How to Get Alessandra Ambrosio's 2020 Grammys Glow

‘Tradwives’: the new trend for submissive women has a dark heart and history