Gov. Abdulrahman Abdulrasaq of Kwara says renovating the decrepit Government House he inherited is not his priority, but programmes that have direct impact on the welfare of the people.

The governor said this on Tuesday when the Emir of Ilorin, Alhaji Ibrahim Sulu-Gambari, paid the traditional ‘Bareke’ visit to the Government House.

The News Agency of Nigeria (NAN) reports that the emir and his entourage were received on behalf of the governor by his deputy, Mr Kayode Alabi.

The governor promised that his administration would complete all abandoned or ongoing projects in the state, adding that ignoring them would amount to wasting public funds already sunk into them.

Abdulrazaq said he inherited a decrepit Government House which he said reflected the general decay of infrastructure in the state,

According to him, he has chosen to prioritise programmes that directly affect people’s welfare instead of embarking on rehabilitation of his own office when he assumed office on May 29.

“As your Royal Highness may have noticed, the Government House we inherited needs urgent rehabilitation as many parts of it are just not fit for habitation.

“This is reflective of the general decay in public infrastructure across the entire state.

“In the circumstances, we cannot in good conscience prioritise rehabilitation of my office to the neglect of urgent matters affecting the state,” he said.

READ  Adebayo Shittu: 'I was expecting to be reappointed Minister but I accept the dumping as God's plan'

“I’m glad to inform Your Royal Highness that all of these issues have received our attention since we came on board.

“We have also resolved not to allow Kwara become a mortuary for abandoned projects.

“This explains why we recently paid N350million to the contractors for the completion of the new State Secretariat Complex.

“We have also given similar assurances to contractors handling all road projects, most of which had been abandoned before we came on board,” Abdulrazaq added.

They are the Asa Dam, Lafiagi Waterwork, and Igbaja waterworks.

He listed other steps taken to include the resuscitation of Radio Kwara, the commencement of fresh round of polio vaccination, resolution of crises and re-accreditation of the Colleges of Education and ending Kwara’s pariah status at the Universal Basic Education Commission with the payment of its N450million debt.

Others were payment of various counterparts’ funds in health sector and road construction, payment of N100million gratuities to pensioners, payment of running costs to government ministries after many years and ongoing talks with federal and development agencies to develop the state.

“Let me reassure Your Royal Highness that this administration has tremendous respect for our traditional institution.

“We see these institution as partners in our effort to re-launch Kwara into national reckoning,” Abdulrazaq added.

The governor promised to continue to support the institution to deliver on its mandate as the custodians of the nation’s diverse cultures.

“In return, we urge the traditional institution to support our programmes in the overall interest of our people and our effort to continue to keep Kwara safe for investments and socioeconomic stability,” he said.

Earlier, the Emir said this year’s Bareke was the first since the governor was inaugurated and commended the administration for its strides.

Sulu-Gambari called for tolerance, understanding and peaceful co-existence among residents of the state.

He prayed for God to continue to strengthen the good bond between the governor and his deputy, saying this would go a long way in promoting unity and peace in the state.

Dignitaries at the Bareke included the Deputy Speaker of the Kwara House of Assembly, Rapheal Adetiba; Chief of Staff, Government House, Adisa Logun; and the Head of Service, Susan Oluwole.

Insecurity: You have exhausted your excuses, IDFP tells Buhari 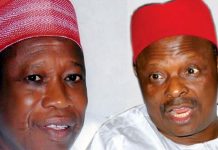 Kwankwanso responds to Ganduje’s outburst, says he will regret his actions

Kwara, Saraki to settle dispute over ‘Ile-Arugbo’ out of court