Real Madrid think Raphael Varane has an agreement with Manchester United over a move to the club, according to reports. With the transfer window now open, Ole Gunnar Solskjaer is determined to sign the World Cup winner. And a move to Old Trafford may now be on the cards.

Real Madrid have raided Manchester United for many of their best players over the years, from David Beckham to Ruud van Nistelrooy.

But, now, the Red Devils may be about to return the favour.

United are determined to sign Varane, who is yet to sign a new Real Madrid contract with his current deal expiring next year.

The France international has spent a decade at the Bernabeu, winning four Champions League crowns during that time, but is weighing up his options as he enters the peak years of his career.

And, now, Spanish newspaper El Confidencial have delved into the situation.

The publication claims Real suspect Varane has a ‘very important agreement’ with United about a transfer this summer, which is why he isn’t renewing his contract.

It’s stated the World Cup winner hasn’t even responded to Real’s offer of a contract extension, with Carlo Ancelotti now wanting the situation clarified by the end of July.

The report says there’s ‘tension’ at Madrid over the situation, especially after already having seen Sergio Ramos leave.

And Varane is trying to see how much he can receive financially from potential suitors, with United now appearing to be clear frontrunners in the race to sign him.

Real will need to act if they lose the 28-year-old, who has been at the club ever since touching down from Lens back in the summer transfer window of 2011.

And whether United are able to capture Varane, 10 years after they first tried to snap him up, remains to be seen.

Sir Alex Ferguson believed a decade ago the Frenchman would be the perfect long-term replacement for Rio Ferdinand, who was entering the twilight years of his career at the time.

But United ended up missing out, with Varane choosing a move to Spain following an intervention from Zinedine Zidane – who was assistant to Jose Mourinho at the time.

The centre-back later opened up on that drama, revealing he spoke to Ferguson about joining.

“Zidane called me and I asked him to call me back because I was studying for my baccalaureate,” he said.

“It’s my relaxed nature that made me react like that. You have to be care-free to deal with so many things at such a young age.

“But to be honest, after that call, my mind was elsewhere; it was hard to focus on revising!

“It was the craziest period of my life: I was getting ready for the baccalaureate, the phone was ringing off the hook, I visited the Real facilities, I met Alex Ferguson… Just imagine, I was doing exams and signing autographs for other students.

“It was surreal. I’m really proud of having passed.”

When asked about his future last month, Varane opted to keep his cards close to his chest.

“My future is clear, I am focused on the end of the season,” he said.

“We are in an intense moment and all our focus is on the matches we have ahead.

“The message to the fans is that I am 100 per cent committed to the team. We have challenges that encourage us a lot. I am focused on giving everything on the field.”

Varane is expected to be involved when France lock horns with Portugal in their Euro 2020 showdown on Wednesday night (8pm). 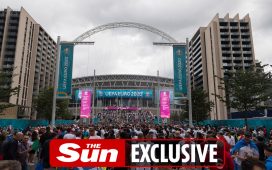