Goals from Luka Modric and Karim Benzema proved to be the difference as boss Carlo Ancelotti won his first trophy since returning to the club.

But there were no smiles from Hazard with the winger an unused substitute at the King Fahd International Stadium in Saudi Arabia.

The ex-Chelsea hero was the only player from the Madrid squad to not show his happiness as his team-mates posed alongside the trophy.

And Real fans were quick to comment on the issue on social media as Hazard failed to even look at the camera.

One user tweeted: “Everyone smiling, except Hazard.”

Another commented: “What do you expect from him when he warms the bench most of the times. Real Madrid is bigger than any player.”

A third added: “I’m heartbroken. Hazard deserved the best and at the club of his dreams he gets pain.”

Meanwhile one posted: “Don’t care anymore sadly. He should leave the club if he’s unhappy, so its his own fault.”

Hazard, who joined Los Blancos from the Blues in 2019, has failed to show his class at Real with the forward plagued by a number of injuries.

He has appeared in 16 games in all competitions this term, though he is yet to chip in with a goal contribution.

Real took the lead against Bilbao in the 38th minute through Modric who rifled the ball home after great work from Brazilian trickster Rodrygo.

Benzema doubled Madrid’s lead seven minutes after the break from the penalty spot following VAR intervention after Yeray Alvarez was judged to have handled the ball.

Ancelotti’s side were reduced to ten men three minutes from time after Eder Militao was sent off for handball on the goal line.

But goalkeeper Thibaut Courtois ensured he would have a clean sheet after he brilliantly stopped Raul Garcia’s penalty kick with his left foot. 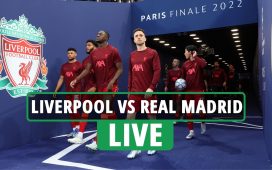