A primitive plant which ruled the Earth 280 million years ago has produced both male and female cones in the UK for the first time in 60 million years.

The plant, located on a cliff-edge on the Isle of Wight, is the first known example of both sexes of cyads blooming outside a greenhouse in British history.

Ventnor Botanic Garden revealed climate change is likely to be the cause, warming the planet to conditions similar to the era of the dinosaurs. 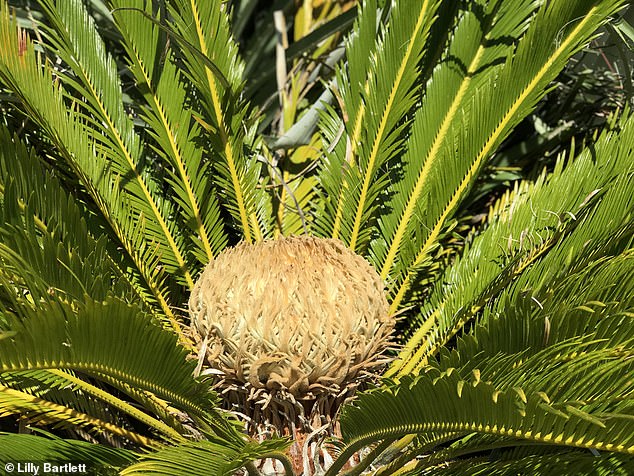 The plant, located on a cliff-edge on the Isle of Wight, is the first known example of both sexes of cyads blooming outside a greenhouse in British history. Pictured, the female cone 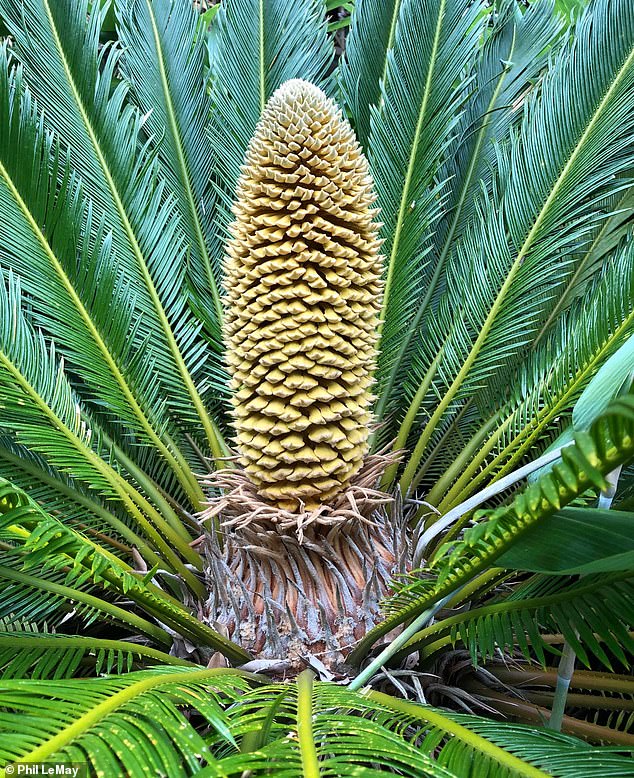 A male cone bloomed seven years ago, but 2019 marks the first time in one season both sexes have emerged outdoors. Pictured, a male cone

Cycas are plants which are native to Japan.

They are commonly seen as an indoor plant and grown indoors as they thrive in warm conditions.

They are thought to have emerged around 280 million years ago and many fossils have been found, with many unearthed around the UK’s south coast spanning from Dorset to the Isle of Wight.

They are a hardy, woddy, perennial plant that glows slowly and resembles a palm.

It doesn’t flower, but can produce male and female cones which allow for pollination and the production of seeds.

Scientifically known as Cycan revoluta, the ancient tree is native only to Japan  and is common as an indoor houseplant in the UK.

Now, the institute has revealed the first female cone on record in the UK.

A male cone bloomed seven years ago, but 2019 marks the first time in one season both sexes have emerged outdoors.

‘For the first time in 60m years in the UK we’ve got a male cone and a female cone at the same time,’ Chris Kidd, the curator of Ventnor Botanic Gardens, told The Guardian.

‘It is a strong indicator of climate change being shown, not from empirical evidence from the scientists but by plants.’

Last year’s heatwave and the record-breaking temperatures of this summer are believed to have allowed the phenomenon to occur, with the plant committing resources to blooming last year.

The location of the botanic gardens means the micro-climate is milder than almost anywhere in the British Isles, ideal conditions for some temperate plants.

The cones are not technically flowers, as they evolved before angiosperms existed, but serve a similar purpose in attracting pollinators. 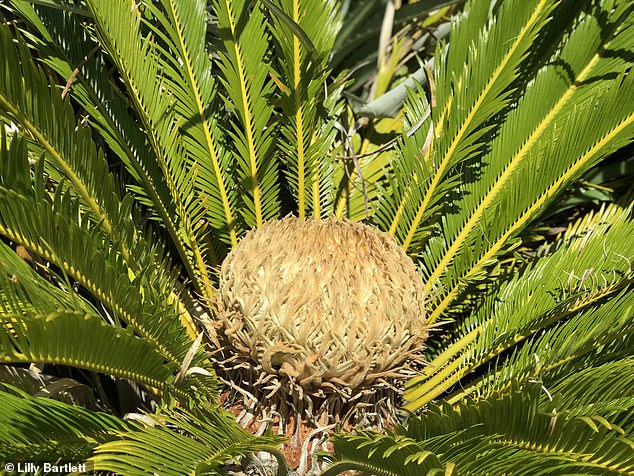 Scientifically known as Cycan revoluta, the ancient tree is native only to Japan and is common as an indoor houseplant in the UK 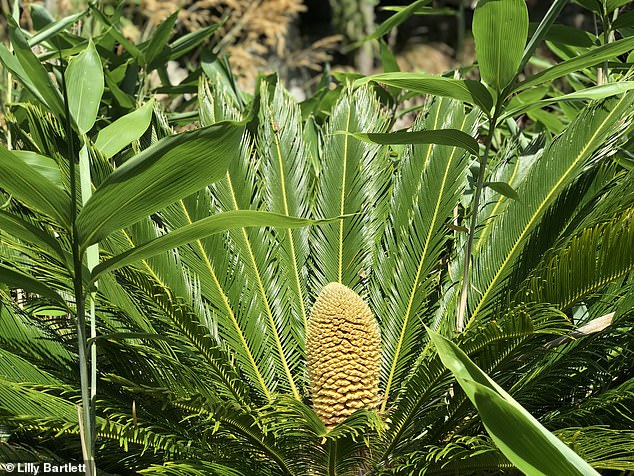 The emergence offers a potentially once-in-a-lifetime opportunity to germinate the plants, generate seed and kickstart a new era of cycad research.

Cycas revoluta are little known but it is believed they are pollinated by beetles but the location of the male and female plants means they will need to be hand pollinated.

The process is expected to happen in about a week.

‘By crossing them and making seed from them we’re doing something that has never been done before in the UK,’ Mr Kidd said, the Guardian reports.

‘We see the undercliff here as being a predictor for the wider British landscape in 20 to 30 years time.’

WHAT IS AN ANGIOSPERM?

Angiosperm is the scientific term for flowering plants.

There are believed to be well over 350,000 species of angiosperm and there is a huge diversity among the species’.

Angiosperms are a phylum which encompass over 400 families and 350,00 species of plant, all of which have similar characteristics.

Before the emergence of angiosperms, gymnosperms and ferns were the dominant groups of plants, but angiosperms quickly established themselves as the most successful group within the plant kingdom.

Gymnosperms evolved before flowers and were around in the time of dinosaurs. They produce seeds as well as tiny drops of high-energy liquid.

The cause of the huge diversity of flowers has often be attributed to the co-evolution with animals and plants which aided in reproduction.

Research from San Francisco State University has found that the stomata – cells which control gas exchange in plants – are much smaller in angiosperms than any other types of plants.

Angiosperms have more venation than other types of plants and this encourages greater rates of transpiration (water transfer), photosynthesis, and growth.

Flowering plants were the only type of plants that underwent rapid genome downsizing during the early Cretaceous period which enabled the decrease in cell size.

Virgin Galactic asks customers to pay £1,000 and PROVE they are serious about going to space

Human populations in India SURVIVED the Toba 'super-eruption' 74,000 years ago