Experts had a race against time as they fought to extract a rare fossil of a 197 million-year-old sea creature from a British beach in a four-hour window allowed by the tide.

Amateur fossil collector Jon Gospill made the discovery of a lifetime when he came across the so-called ‘ichthyosaur’ in Bridgewater Bay before Christmas last year.

He was led to the beautifully preserved fossil on Stolford Beach by his dogs, Sam and Poppy, after the latter of whom the fossil has now been nicknamed.

A team of specialists then had just four hours once they started excavation to beat the tide and retrieve the 360 pound fossil specimen from the shore.

The five-and-a-half foot long marine reptile had been exposed by winter storms. 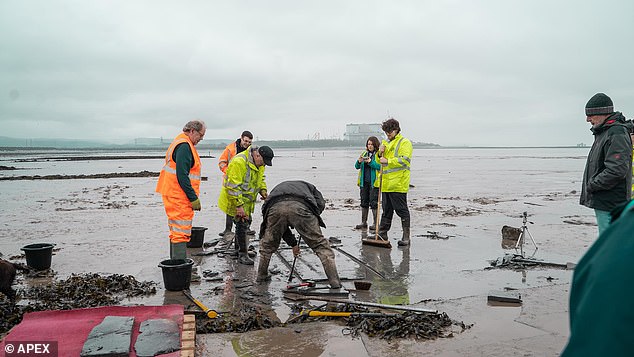 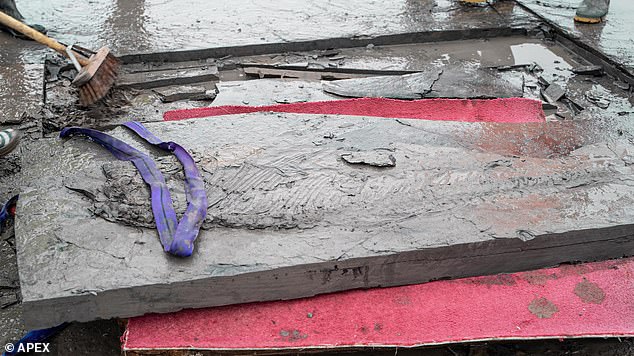 The rescue mission took place at the first opportunity allowed by the tides after the unexpected discovery was made as the fossil was at risk of being washed away by the strong seasonal tides.

A team of geological specialists from Geckoella had a four-hour window within which they could extract the specimen from the Blue Lias rock.

They used rock saws, hammers, chisels and crow bars to cut out a single block of stone — 89 inches long, 33 inches wide and 3.5 inches deep — that contained the fossil.

Bridgwater Bay National Nature Reserve is owned by the Environment Agency and managed by Natural England, who assisted with the excavation along with archaeologists from the South West Heritage Trust.

They were joined by Mr Gospill together, of course, with Poppy and Sam.

‘It was very exciting to have the chance to rescue such an impressive fossil ichthyosaur as “Poppy”,’ said Geckoella palaeontologist Andy King.

‘Given the tidal conditions at Stolford and very shaley nature of the rock, this particular extraction was certainly more challenging than others we’ve been involved with.’

‘Though the skull is not preserved, “Poppy” is otherwise remarkably complete.’

‘It’s not uncommon to find pieces of fossil ichthyosaur ribs or vertebrae, but such complete specimens are relatively rare.’

‘Slightly older ichthyosaurs have been collected from West Somerset, but it’s still quite a feeling to realise that this marine reptile was swimming in the Jurassic seas covering Somerset nearly 200 million years ago.’

This, he explained, was ‘at the same time that dinosaurs were walking around on the land and pterosaurs were flying in the skies.’

‘We’re really delighted that this fossil was collected safely and responsibly, and that it will be preserved by the South West Heritage Trust.’ 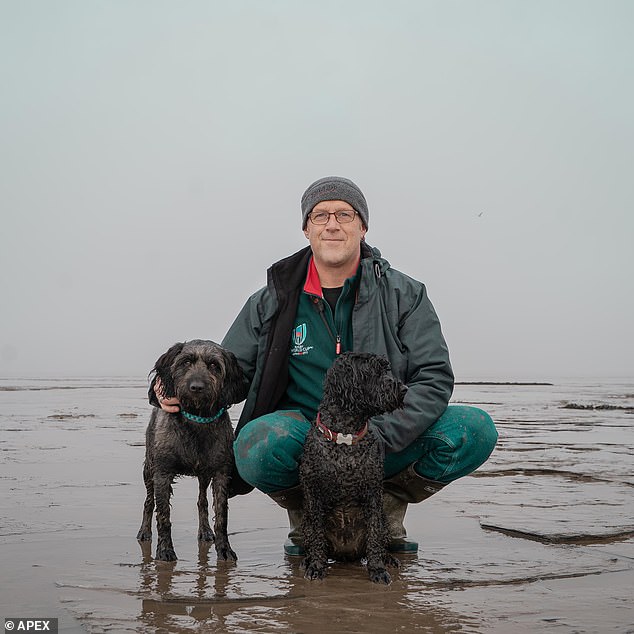 He was led to the beautifully preserved fossil on Stolford Beach by his dogs, Sam and Poppy, after the latter of whom the fossil has now been nicknamed

The Environment Agency transferred ownership of ‘Poppy’ to the Somerset Heritage Centre near Taunton on January 17, ahead of conservation work to be undertaken by the Heritage Trust.

‘We’re grateful to Jon and our partners at Geckoella, Natural England and the Environment Agency for their collaboration in successfully rescuing this remarkable specimen,’ said Sam Astill, the trust’s head of museums.

‘We will now undertake the conservation work required to preserve the fossil.’

‘This involves three basic steps — cleaning, including desalination and drying, consolidation and stabilisation to avoid splitting and preparation for display.

‘We look forward to displaying “Poppy” at the Museum of Somerset where visitors can discover more about the county’s Jurassic past.’ 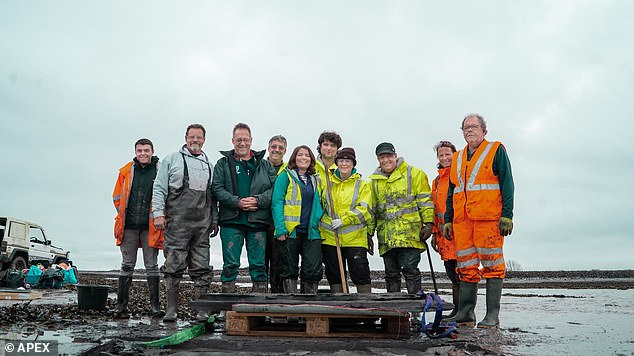 ‘I’ve been interested in fossils all my life. I started fossil hunting on Watchet beach when I was just six-years-old,’ said Mr Gospill.

‘The scale of this find, at 197-million-years-old, is incredible. When I saw it I thought, “I’ve been looking for this my whole life!”,’ he added.

‘You see ichthyosaurs in museums and think they’re amazing, but to actually find a “wild” one in it’s natural environment is totally mind-blowing.

‘Somerset is my home so I’m delighted that this specimen will be staying in the county for other people to enjoy.’

WHAT DO WE KNOW ABOUT THE ICHTHYOSAURUS?

Ichthyosaurs were a highly successful group of sea-going reptiles that became extinct around 90 million years ago.

Often misidentified as swimming dinosaurs, these reptiles appeared before the first dinosaurs had emerged.

They evolved from an as-yet unidentified land reptile that moved back into the water.

The huge animals, which remained at the top of the food chain for millions of years, developed a streamlined, fish-like form built for speed.

Scientists calculate that one species had a cruising speed of 22 mph (36 kmh).

The largest species of ichthyosaur is thought to have grown to over 20 metres (65 ft) in length.

The largest complete ichthyosaurus fossil ever discovered, at 3.5 metres (11ft), was found to have a foetus still inside its womb.

Scientists said in August 2017 that the incomplete embryo was less than seven centimetres (2.7 inches) long and consisted of preserved vertebrae, a forefin, ribs and a few other bones.

There was evidence the foetus was still developing in the womb when it died.

The find added to evidence that ichthyosaurs gave birth to live young, unlike egg-laying dinosaurs.

Hidden chambers found at the 3,400-year-old tomb of Tutankhamun

Match.com rolls out safety feature that relays details of your next date to three emergency contacts