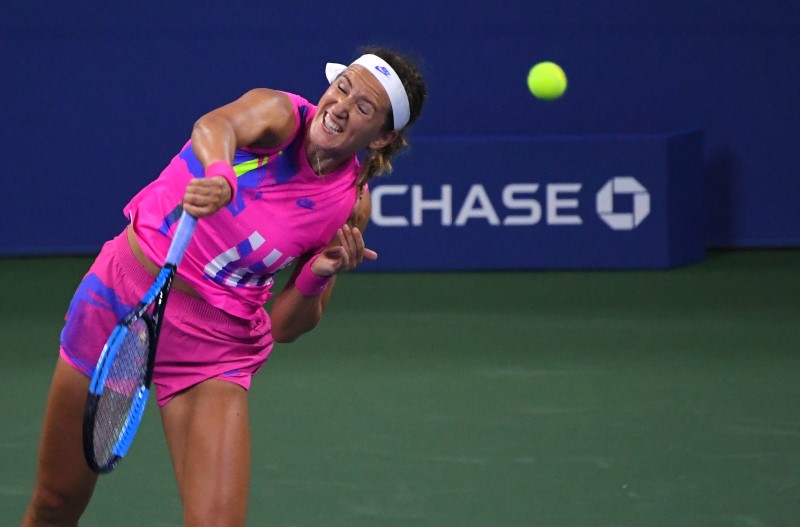 NEW YORK (Reuters) – Victoria Azarenka put fellow Belarusian Aryna Sabalenka firmly in her place with an 6-1 6-3 victory in the second round of the U.S. Open on Thursday, further cementing her status as a dangerous floater in the women’s draw.

The unseeded former world number one whipped through the contest against fifth seed Sabalenka on the Louis Armstrong Stadium court in little more than an hour to set up a third-round date with Sachia Vickery or Iga Swiatek.

“Today was really solid,” the 31-year-old twice Australian Open champion said. “I felt like I stepped on the court and I was really making her earn every single point that we played. That was my goal to be really, really strong.

“I would really like to continue in that way. I got to a lot of balls and … I’m so happy that I stayed really strong in the end.”

Sabalenka won the first meeting between the Fed Cup team mates in the first round of the last U.S. Open but this year Azarenka is on a roll after winning the title at last week’s Western & Southern (NYSE:) Open, albeit after a walkover in the final.

“I think (last year) was a little different circumstances for me,” she said.

“I have done a lot of good work. I’m feeling good, I’m feeling happy. I’m still eager to kind of perfect everything, which I know I’ll never get to, but we’ll try.”

Azarenka’s career has been a rollercoaster ride since she since she returned to the tour in 2017 after taking time off to have her son, Leo.

She is one of a record nine women players with children in the singles draw at Flushing Meadows but bristled at the thought that she would be defined purely by her motherhood.

“Identifying myself or other players just as mothers, I think that’s not the only thing that we are,” she said.

“We are also tennis players. We are also women who have dreams and goals and passions.”

Azarenka hoped the match between her country’s top two players had provided positive distraction to her compatriots after weeks of mass protests and strikes in the former Soviet republic.

“I feel like there is a lot of things going on in the world, and obviously what’s happening in Belarus is very dear to my heart,” she said.

“I feel like sport has always been a celebration in our country. It’s always been really appreciated. People really love sport. I hope they are watching.