December 31 2019: The WHO China Country Office was informed of cases of pneumonia of unknown cause detected in Wuhan City, Hubei Province of China. Around 44 suspected cases were reported in the month of December.

January 1 2020: A seafood market was closed for environmental sanitation and disinfection after being closely linked with the patients.

January 13 2020: A Chinese woman in Thailand was the first confirmed case of the mystery virus outside of China. The 61-year-old was quarantined on January 8, but has since returned home in a stable condition after having treatment, the Thai Health Ministry said.

January 14 2020: The WHO told hospitals around the globe to prepare, in the ‘possible’ event of the infection spreading.

January 16 2020: A man in Tokyo is confirmed to have tested positive for the disease after travelling to the Chinese city of Wuhan.

A second death, a 69-year-old man, was reported by officials at Wuhan Municipal Health Commission. He died in the early hours of January 15 at Jinyintan Hospital in Wuhan city having first been admitted to hospital on December 31.

READ  DR MAX THE MIND DOCTOR: How you can sow seeds of recovery to find happiness

January 17 2020: Thailand announces it has detected a second case. The 74-year-old woman had been quarantined since her arrival on Monday. She lived in Wuhan.

Scientists at Imperial College London fear up to 4,500 patients in Wuhan may have caught the virus. A report said if cases are this high, substantial human to human transmission can’t be ruled out.

January 20 2020: China reported a sharp rise in the number of people infected with a new coronavirus over the weekend, including 136 more cases in Wuhan city.

The outbreak spread across China, as authorities in Shenzhen in southern China reported one case, and Chinese state media said Beijing had reported two cases.

South Korea confirmed its first case – a 35-year-old woman arriving at Seoul’s Incheon airport tested positive for the virus. She had been in Wuhan the week prior.

Details were not revealed about the third death.

'Vagina is not a rude word': the scientist fighting to empower women, one word at a time

Dementia care: Characteristic in young adulthood that may indicate your risk in later life 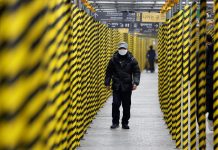 Coronavirus: The unexpected item you could catch the deadly virus from