Boris Johnson’s government has made some controversial spending decisions since March 2020, such as £37bn on a malfunctioning test-and-trace system, or the £3.7bn of Covid-related contracts flagged by Transparency International as potentially tainted by corruption. The unprecedented nature of the pandemic has destroyed any veneer of fiscal restraint, with the cost of the furlough scheme alone approaching £70bn.

Some of these decisions were rash, others were justifiable given the emergency at hand. But none have been as conspicuously destructive as the decision to deliver just a fraction of the “catch-up” funding for schools recommended by the government’s own “education recovery tsar”. Only £1.5bn was offered, or one-tenth of what Sir Kevan Collins had recommended before he resigned in protest shortly after the announcement in early June. The chancellor, Rishi Sunak, who found so few opportunities to say “no” over the past 15 months, has finally rediscovered his inner Margaret Thatcher.

This is not merely a controversy about education: it is key to understanding Johnsonism in practice, which, for all the appeals to “levelling up” and fiscal extravagance, shares with Sunak a disregard for the longer-term future. The politics of nostalgia meshes well with the economics of austerity where children and young people are concerned, with neither ideology offering any serious hope for national renewal.

The economic arguments for spending more to compensate for “learning loss” during the pandemic are now well rehearsed. British children have lost more than half a year of normal school, which the Institute for Fiscal Studies calculates could translate into £350bn of lost earnings over a lifetime, and £100bn of lost tax revenue. These sorts of calculations helped to justify the decision of the Netherlands to commit an additional £2,500 per pupil per year, compared with just £100 in the UK.

Public spending on education is also one of the central ways that market-oriented societies such as Britain’s strive to reduce inequality. An expert consensus has developed in recent decades that money spent on early-years education offers disproportionate benefits when it comes to tackling the lifelong impact of a disadvantaged background – thinking that was instrumental in New Labour’s introduction of Sure Start and free nursery places for three- and four-year-olds.

See also  Soas survived the end of empire but can it recover this time?

The closure of schools and early-years settings will have fallen particularly hard on disadvantaged children, who are likelier to have unequal access to technology and smaller homes, and live in neighbourhoods where infections, and therefore school closures, are higher. Inequalities in reading and maths have deepened along class and geographic lines. Many of these will have lifelong impacts.

Learning aside, young people have suffered deeply in many other ways, whether it be the loneliness and stress faced by university students or the job losses that fell disproportionately on under-25s. The mental health of children and young people in Britain was already one of its most shameful social indicators before Covid-19 (referrals to children’s mental health services jumped by an astonishing 35% in the year prior to the pandemic) and looks set to get worse. No amount of “catch-up” funding will address this crisis if it only leads to a further narrowing of the curriculum and more testing. But when all a government has is a hammer, everything looks like a nail. Despair is not an unreasonable mindset for those approaching adulthood under these circumstances.

It is striking that nobody is standing up politically and naming this national abandonment of the young. What does it say about a nation that it can find £372bn (and counting) to fight a pandemic, but strives to shave every penny off the cost of renewing itself in the aftermath? This is the trajectory of social nihilism: a political project that has no spending limit when it comes to Tory donors, employers and voters in target seats, but refuses to see any value in the next generation of employees and citizens.

The fact that children and young people are extremely unlikely to be harmed by Covid-19 may be too obvious to need pointing out, or else sound like the prelude to an argument against lockdowns or school closures. But on the contrary, it is evidence that, over the past 15 months, we have witnessed one of the most remarkable acts of collective sacrifice since 1945 – of the young for the old, the low-risk for the high-risk. This is something to be recognised and celebrated. Instead, our political and media gerontocracy have simply pocketed the gift and barely mentioned it again.

The claim repeated by the intellectual friends of the Conservative party is that they have moved left on economics and right on culture. But the fiscal treatment of children (which will harm disadvantaged youngsters especially) shows that Johnsonism is really just “moving right on culture” all the way down. The efforts to “move left” on economics turn out to be electorally motivated gestures towards particular groups of voters. The result is a political regime that offers symbolic recognition to regions and communities (the so-called “red wall”) that were injured by Thatcher four decades ago thanks to the vicious monetarist recession of the early 1980s, while ignoring the communities that are being injured in front of their eyes today.

Sigmund Freud made a distinction between “mourning”, in which a person suffers some loss or injury which they slowly and painfully move on from, and “melancholia”, in which they turn in on themselves in a hateful search for what’s been lost, refusing to accept that it is gone. In the early 2000s, cultural theorist Paul Gilroy adopted the same language to diagnose Britain’s “post-colonial melancholia”, suggesting that an unrelenting culture of flag-waving and Churchill-worship signified an unhappy, angry quest for something that had been mislaid. Our new era of enforced union jacks and government yachts has proved Gilroy more right than he could possibly have feared.

Boris Johnson didn’t invent this melancholic culture, but he has encouraged and exploited it ruthlessly. It is there in the jingoistic headlines of tabloids, just as it is there in the attention-seeking interventions of ministers in confected “culture war” issues. But the attitude to younger generations is also a component, the insistence that the future cannot – must not – be better than the past. The sudden exercise of fiscal restraint when it comes to children’s education is symptomatic of something deeper than mere economics. It is the self-punishing aspect of melancholia that Freud identified – and today’s children are the ones on the receiving end.

What would a political tonic or alternative look like? Too often the left looks at the intergenerational schisms in our politics and economics, and simply waits for the ticking demographic timebomb under the Tory party and the press to explode. But the emergency for children and young people is now.

A more immediately plausible strategy for Labour would be to do whatever it takes to position itself as the party of children and young people, and therefore the party of realistic national hope. Melancholia works politically when it is channelled via the media and Downing Street machine, to focus on manufactured “cultural” controversies. But it may have less psychological hold on people in their everyday lives, as they imagine their children and grandchildren growing older.

If there is hope for Labour, it must lie in the likelihood that many Tory voters are more compassionate and less nostalgic than their political representatives and media spokespeople, and can still recognise the most palpable social injustices. Few things have caused this government more discomfort over the past year than Marcus Rashford’s campaign for free school meals, or the righteous anger of GCSE and A-level students at having their results set by an algorithm.

School pupils may not vote, and young people may not vote enough, but to discount these people politically (as Sunak and Johnson have done) could still come back to bite them – if another party could make our society’s treatment of the young the political issue it deserves to be.

‘Self-esteem was low. Look at them now’ : the scheme getting Kenya’s girls back to school 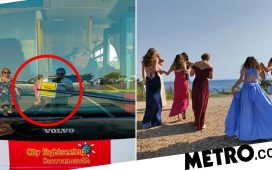 Did you solve it? Clueless sudoku