Gerwyn Price confirmed Wales as Land Of My Darters after lifting the Sid Waddell Trophy and taking over as No.1 in the world.

After 11 missed darts at the gates of glory, and his nerves evaporating, Price sank to his haunches in relief after nailing double five.

The champion admitted: “I’ve never felt pressure like that in my life. Numerous times I thought I was going to lose it.

“When you get that chance to win, and three darts in your hand, you think you are going to take it – but I had never been in that situation to win the world championship before and it was so tough.”

By knocking Michael van Gerwen off the No.1 spot after 2,559 days and absconding over Muswell Hill the £500,000 winner’s loot, Price became only the fourth player in history to top £1 million prize money on the PDC order of merit.

In a glorious year for the Welsh, 35-year-old Price has now won the World Cup with Jonny Clayton, the World Grand Prix and joined Leighton Rees, Richie Burnett, Mark Webster and Wayne Warren as winners of the holy grail.

Instead of freezing – or melting – on the big stage, the Iceman produced the performance of his life.

Averaging 100.08 and peppering the board with 13 maximum 180s, the marksman from Markham was brilliant as he surged 6-1 ahead.

And in the sixth set, where he missed double 12 by a pencil width for a nine-darter, Price’s 134.64 average was the highest in world championship history.

Apart from his late wobble, Price was fantastic. In his last major final against Anderson, at the 2018 Grand Slam, Price landed a record fine for excess histrionics after the pair squared up on the oche.

But there was no bad blood this time – mainly just one-way traffic. Price bellowed his approval of big shots, and the Flying Scotsman, who won back-to-back titles here in 2015-16, never got out of the sidings.

Anderson has no need to reproach himself. Not to put too fine a point on it, has been pulling a fast one on us for the past three weeks.

He claimed he didn’t have “a hope in hell” of a third world title after battling a bad back, a sore knee and a breakdown on the M4.

He whimpered about Mensur Suljovic putting his darts on the wrong drinks table, he whined about the Austrian’s slow play and he whinged when Sky Sports commentators told him to get on with it.

One day, it is likely that he will go past Jocky Wilson’s pair of world titles and stand alone as a titan in tartan among Scotland’s finest purveyors of tungsten.

Anderson was gracious in defeat, saying: “It wasn’t my night, but just to reach the final itself is a pat on the back for myself.”

Darts has its first lockdown world champion, but it has also been the most tenacious survivor since Bear Grylls in the adversity and emptiness of a viral plague.

Back in April, the concept of world-class players going head-to-head on the internet from their own living rooms, socially distanced by up to 10,000 miles, was supreme innovation. Bonkers, but supreme.

And when the PDC’s showpiece was forced behind closed doors after only one night by a dithering, two-bob government, the show didn’t just go on: The quality was often spellbinding.

Michael van Gerwen’s prime-time thriller against Joe Cullen was one of the greatest darts matches of all time, Dave Chisnall’s 5-0 wipeout of MVG one of the greatest upsets and for his perfect nine-dart leg in defeat against Stephen Bunting, James Wade will get… a golden pin badge. 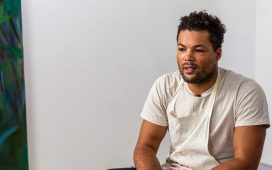