The Premier League’s pay-per-view model may have drawn widespread criticism and boycotts from some fans, but their viewing figures have been slightly above target so far.

Fans have been asked to spend £14.95 on a string of Premier League games that have been available on BT Sport Box Office and Sky Sports Box Office.

The Daily Mail reports that the figures for the first nine PPV matches were given to clubs on Tuesday and the average number of buys was 39,000.

This came in marginally over the Premier League’s target, which was to match stadium attendances.

The Athletic predicted that average viewing figures of around 40,000 would work out at £600,000 earned for clubs, minus broadcast fees.

The 39,000 average did not include Brighton vs West Brom, which may well have lowered the figure.

The scheme has come under heavy criticism, with Gary Neville saying on Sky Sports on Monday night : ‘It’s finished, no one is paying for it, no one is watching it, it’s done.’

Newcastle owner Mike Ashley has called for the price to be significantly reduced.

‘Charging £14.95 for single televised matches in the current climate it is not acceptable to any football fan,’ Ashley said in a statement.

‘Supporters have overwhelmingly rejected this offer and the Premier League must now act.

‘Why not make it much more accessible at £4.95 per match until Christmas?’

Premier League clubs are expected to vote today (Tuesday) on lowering the price of PPV matches. 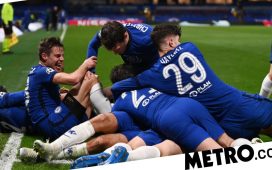