A TEACHER who beheaded seven family members while pregnant “because they wouldn’t let her marry her lover” has made a last-minute plea for mercy as she is set to be hanged.

India death row prisoner Shabnam Ali, 38, has been held in jail for the past 11 years after she was convicted of murder.

Her family were said to be against her relationship with carpenter Saleem due to their difference in backgrounds.

The couple then brutally murdered seven of her relatives – her mother, father, two brothers, sister-in-law, cousin and 10-month-old nephew – in 2008 after sedating them.

Shabnam, a postgraduate in geography and English, was pregnant at the time and gave birth to her son, Taj, in prison.

Her petition for mercy in 2016 on the grounds of being a mum to a young child was rejected.

Now, preparations are said to be underway for Shabnam to be hanged at Mathura jail in northern India.

Prison authorities told Arab News that she is likely to be hanged as soon as a death warrant is issued by the court.

After visiting his mother on Sunday, Shabnam’s son – now 12 – has pleaded for her to be forgiven in last-ditch effort to stop the execution.

He told Arab News: “When I met Ammi (mum) on Sunday, she told me to study hard and be a good human being, no matter whatever I do in life.

“She asked me not to worry.

“I hope the respected president of India will not disappoint a child like me and pardon my mother.”

Shabnam, who taught at a school in her native village of Bawankhedi in Amroha at the time of the killings, has also filed a second petition for mercy with the state governor and president, Ram Nath Kovind.

But her lawyer during trial, Arshad Ansari, has said it is “highly unlikely” the case will be reopened.

If hanged, Shabnam will be the second woman in India to face the gallows since 1947.

Her accomplice, Saleem, is also on death row and has seen his review petition rejected by the court. 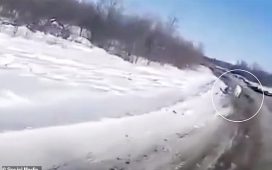 Out of thin air: the mystery of the man who fell from the sky

Advances mean all new US vehicles can be electric by 2035, study finds