Stacey Solomon has shared a heartfelt video of her preparing a book for her new baby only to be taken on a trip down memory lane looking at baby scans of her three children.

In a beautiful black and white montage posted on her Insta Stories, the Loose Women star posted: “Honestly crying so much. I was about to start baby’s book… But then Leighton wanted to get all of the memory boxes out and see his and his brother’s scans so that’s what we did instead.”

Stacey and her children Leighton, Zachary and little Rex all look at the adorable scans with an incredulous Leighton asking: “Is that me?” to which his mum replies: “Yes, aren’t you cute”.

A Peter Rabbit baby book can be seen in the Instagram story, which Stacey is creating for her newest “little pickle”.

At the end of the video the fan favourite writes: “All I know is time has gone way too fast and I want it back. Best 13 years of my life boys. Thank you….I’m so excited to grow our next pickle.”

Showing the baby scans side-by-side Stacey concludes: “They all look so different. Why am I looking at them wanting to put them back in my tummy? Send help,” followed by a laughing emoji.

The 31-year-old joyfully announced she is expecting her fourth child – and second with fiancé Joe Swash – earlier this month with a sweet Instagram post.

With her baby news now out in the open, Stacey has been delighting her loyal social media followers with pregnancy updates – and recently gave fans a glimpse of her burgeoning bump.

The Loose Women panelist shared several clips on her Instagram Story of her trying out a bump mask after her youngest Rex enjoyed an afternoon nap.

In the clip, Stacey admitted the humidity was getting too much for her so hilariously rolled up her purple dress to trial the beauty product.

Writing across the video, she shared: “Feel like actual poo, it’s so muggy today so I bought a bump mask the other day and left it in the fridge.

In the following clip, she began rolling up her dress and joked that her boobs were “strong enough to hold anything” as she tucked her dress under her bra.

Stacey hilariously added: “Tuck my dress under my boobs because they’re strong enough to hold anything. C’mon then. It’s so nice and cold, oh yeah happy Thursday.”

The TV star’s well-deserved self-care comes after her youngest son Rex had to be rushed into surgery after suffering a fall, but it seems the toddler is recovering well from his operation.

The Tap To Tidy author took to her Instagram Story to give an update on how the two-year-old was doing.

Rex was all smiles, showing that he’s truly on the mend.

Stacey wished her followers a good morning, and later said that Rex is “doing so well” and being “such a good boy”. 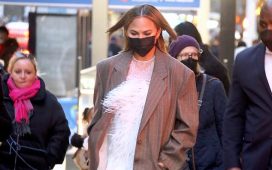 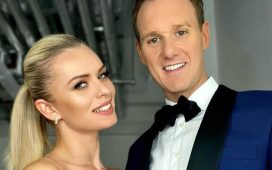