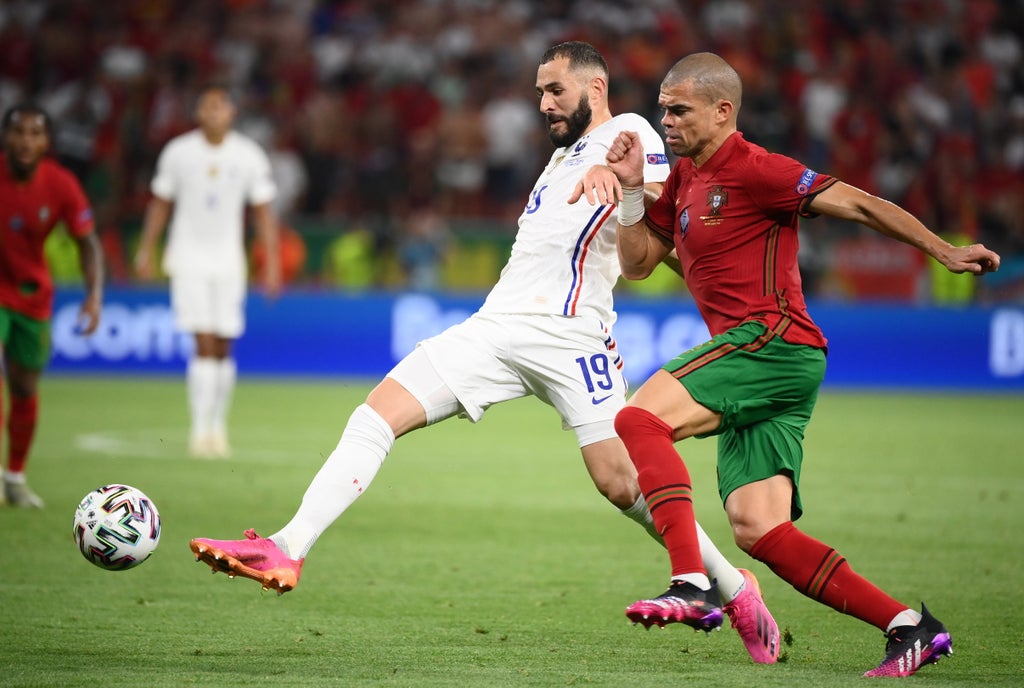 Portugal face off against France in the conclusion to Group F at Euro 2020 with all four teams still fighting for qualification or to win the group.

The Selecao picked up a win over Hungary with a flurry of late goals in Budapest, including a Cristiano Ronaldo double, but Fernando Santos’ side were thoroughly outplayed in defeat to Germany last time out.

France meanwhile were held by Hungary but know they can win the group with victory here. England will keep a close eye on results here, with the runner-up from the group primed to face the Three Lions at Wembley next Tuesday.

Les Bleus coach Didier Deschamps has spoken about his faith in Karim Benzema, with the Real Madrid striker yet to get off the mark since returning from international exile: “Strikers live and feed off goals. Karim is carrying a heavy burden despite his experience. He has a responsibility, the same as Giroud three years ago at the World Cup. The most important thing is that I have every faith in him and so, too, does the entire squad. There are times when strikers don’t score goals. They are judged on whether they score or not.”

Follow all the build-up, action, analysis and reaction across the game in Group F.

45+5 mins: We’ve had a penalty each for both Portugal and France as we head into the break. As things stand, France are leading the group with Portugal second and Hungary third. Germany are on their way out unless they can rescue something in the second half.

45+2 mins: Karim Benzema has had a quiet game so far but he steps up for the penalty. He sends Rui Patricio the wrong way and socres his first goal for France since being recalled to the side.

45+1 mins: There’s a lot of protestations from the Portuguese players but after a VAR check the penalty stands.

45 mins: Paul Pogba chips an aerial ball into the Portugal box. Mbappe makes a run into the area and Semedo blocks the run. The two collide and Mbappe goes to ground.

42 mins: Ronaldo sucks Kimpembe in with a couple of his trademark stepovers. The French defender has a nibble and clips the outside of Ronaldo’s leg bringing him down.

The free kick is in almost the exact same spot to the one which won them a penalty. Moutinho knocks it into the box but Kante is able to clear it this time.

39 mins: Griezmann is shown a yellow card for a a soft but late tackle on Danilo. The Portuguese midfielder is in the wars tonight.

38 mins: Bernardo Silva and Nelson Semedo have been in fine form. Semedo’s overlapping runs have provided Portugal with space out wide on the right and Silva seems to have found him with a pass everytime. Semedo’s cross is deflected out to Mbappe and Silva fouls the French striker trying to win the ball back.

35 mins: Cristiano Ronaldo now has a record 20 goals at major tournaments and finally has his first goal against France at the seventh time of asking.

Portugal are playing some nice football now. France are playing a little deep and aren’t getting as much possession as they’d like in midfield.

32 mins: That’s a huge goal for Group F. As it stands Portugal would top the group, France would come second, and Hungary third with Germany going out of the competition.

30 mins: Was it ever in doubt? Cristiano Ronaldo steps up and slots the spot kick to Hugo Lloris’ right as the goalkeeper dives left. 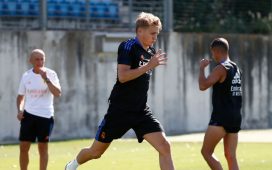 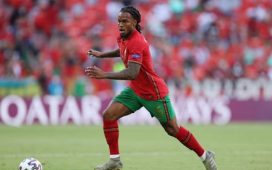 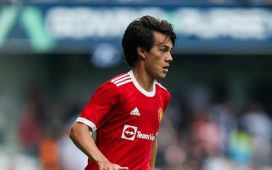