Policewoman in trouble as suspect drops dead in DPO's office 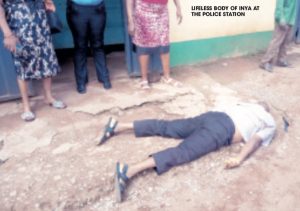 A policewoman intervened in a matter involving some young boys playing football in the neighbourhood which has now turned out to be a murder case.

At the moment, men and officers of the police command serving at the division are making concerted efforts to come out with explanations, which would be acceptable to the deceased’s family on what actually happened to their father.

But the greater trouble lies on the table of a policewoman who allegedly intervened in a hitherto minor matter involving some young boys playing football in the neighbourhood which has now turned out to be a murder case.

It all started at Nri Street in Abakaliki when some children of varying ages were playing football in their neighbourhood. In the course of the outdoor activity, their football landed in the premises of nearby Assemblies of God Church located at No. 4 of the said street. The deceased and his family live at No. 2 on the street.

But when they accosted the security man guarding the facility to release the ball to them, he allegedly refused.

A son to the deceased, Inya Aluu Ebenezer, who was one of the football players, gave Saturday Sun a personal account of the incident.

“We were playing football in the neighbourhood and the ball landed in the premises of the Assemblies of God Church located at No. 4 Nri Street. So, we went to the gateman and begged him to give us the ball. He refused and started insulting us. So, we exchanged words with him.

“The pastor’s daughter came out and asked us what was happening. We told her that our ball entered the church premises and that she should help us with the ball. She told us to come back later and collect the ball.

“We left. After sometime we went back to the church and asked the gateman for the ball and he started exchanging words with us again. The senior pastor came out and made comments that didn’t help the situation.

“Then I exchanged words with him. His children and some members of the church started attacking us. They asked us to go back to our house so that the situation would calm down.

“So, I went back to my house. I was about taking my bath when two security men from a private firm (name withheld) came and told me to go and apologize to the pastor so that peace would reign. I insisted that I was not going anywhere. But later, I came down because they threatened that they would go and call the military if we don’t resolve the matter. So, I followed them to the church.

“A member of the church who is a policewoman who is not even on duty; she’s on maternity leave, came with a handcuff to handcuff us but we protested it. She did not give us any reason. They locked the gate of the church and started beating us”, he narrated.

The 18-year-old boy who is a 200L student in the Department of Criminology and Security Studies, Alex Ekwueme Federal University, Ndufu Alike Ikwo (AEFUNAI) said that the noise of the commotion drew the attention of his dad who was at home at the time.

Ebenezer alleged that the last he heard from his dad was when he was taken into the DPO’s office. “When we reached the station, she locked us behind the counter and started beating me. Then, they asked my dad to follow them to a room. So, my dad followed them together with the Assemblies of God Church people to the room.

“The next thing they did was that they came and released us and asked us to go and carry our father’s body. That room is said to be the Divisional Police Officer’s office. All of them left the corpse. My friend and I took the body to FETHA where two doctors confirmed that he was dead. While we were heading to the hospital, he was foaming from his mouth. My father was 100 percent okay before this incident happened. I suspect that he was manhandled inside the DPO’s office because before we left the church, the policewoman also attacked him. She slapped him”, he narrated.

“As children which they are, they carried him to the hospital. They were still in Keke NAPEP when I reached the hospital. I saw my husband lying down with foams coming out of his mouth. When a doctor came out and checked, he confirmed him dead”, she said.

The Police Public Relations Officer in the state, ASP Loveth Odah, confirmed the incident. She however absolved the police of being responsible for the man’s sudden death even as she said that investigation has commenced.

“On 29th of August 2018, the DPO of Kpirikpiri division, said that there was a call from the Assemblies of God Church at Nri Street, Kpirikpiri that children were playing football and they played into the church premises.

“So the security officer whose name I do not know seized the ball because he said that it was a regular thing which he said disturbs the occupants during the church hour.

“So, yesterday unfortunately the ball entered there and the security officers seized it. According to them, children started throwing stones on top of the zinc of the church. Along the line, the security officer decided to open the door to see who was doing it.

“He saw the two children who were doing it. He dragged them into the premises and called the policewoman who had handled their matter before. The policewoman was actually on maternity leave. She was passing through the church to go and fill her gas cylinder. According to her, she parked her bike and entered to see what was happening.

“The security man opened the door for her and the access paved a way for their father to enter with her into the church premises. They were all taking the case as children’s play; that’s according to the policewoman.

“But the father of the children insisted that since he has dragged the children inside, by so doing, illegally detaining them, the police must be aware of it. The policewoman assisted them to the police station and went her own way because she was not on official duty.

“According to the DPO Kpirikpiri, he said that he was handling a matter involving other parties with a DSS officer in his office, then he was alerted about the incident and he was called to listen to them.

“He said that as soon as he came out, he saw somebody telling the man that he was breathing too high; ‘what’s happening to you?’ For them to rush and attend to the man, he slumped. They later stopped a tricycle and wanted to take the man to a clinic but the children insisted that they will go to FETHA insisting that that is where the man has a card. On their way to FETHA of the man dropped dead. He was confirmed dead by a doctor. Nobody touched the man.

“Please let’s wait for the autopsy to come out and let’s see if the man died of beating by anybody or any other thing or the sickness in him which he had earlier before this incident. But it’s an unfortunate incident”, the PPRO said.

Strike: Ngige Did Not Invite Us To Any Meeting On Thursday – ASUU