Pink is getting well into the holiday spirit before it’s even though of kicking off, as she sorted her Halloween costume this week.

May we remind you that it’s September (not even mid-month, at that) and Halloween doesn’t grace our senses until the last day of October.

The singer’s spidey senses were evidently tingling like there was no tomorrow this week as she got to grips with her costume alongside two-year-old son Jameson.

The adorable pair donned the outfit of Spider-Man, with Jameson going for the traditional blue and red colours of the Marvel comic hero, and Pink, 40, taking things to a whole new level by donning a brilliant all-blue wonder.

‘Jameson and I are trying to decide on Halloween costumes a little early,’ the superstar wrote alongside the shot, as she flexed her Spider-Man pose.

Fans loved the outfits, but also felt Pink has spoiled Halloween for herself now – meaning the one day of the year she’s able to go undetected she had now given away her disguise.

She might have been onto something great there, after it was revealed by rapper Aitch that Ed Sheeran likes to don a Spider-Man costume to get around gigs undetected.

Pink is basically cementing the fact her children are bosses, after her husband Carey Hart, 44, shared the couple’s daughter Willow, eight, getting a punk rock haircut.

Seriously, this family could not get any cooler.

Sharing a snap of their kid getting her hair shaved on one side, Carey wrote: ‘Loving my punk rock daughter. Remember everyone, fly your own flag. There is no box to be put in. It’s better to be your own self. Own it, and love it.’

Carey added, quite rightly: ‘And if anyone has a problem with it, tell them (politely) to move on.’

He went on to say that he’s excited to watch his daughter grow up to be ‘fierce’ and ‘compassionate’.

‘Can’t wait to see the woman you grow up to be. I have a feeling you are going to be strong, fierce, compassionate, and caring. I’m so proud of you, Willow,’ he wrote.

This is why we can’t have nice things.

Pink can, though – Pink can definitely have nice things.

MORE: Top Boy’s Ashley Walters hits back at London Hughes over show criticism: ‘She didn’t get through casting’

MORE: Rihanna confirms no new music is about to drop so we’ll just keep waiting we guess 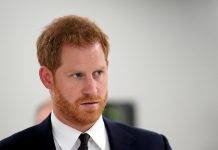