With Pep Guardiola’s Manchester City flourishing in a flexible system featuring no centre forward, they should give up their chase of Harry Kane in favour of their new Brazilian gem 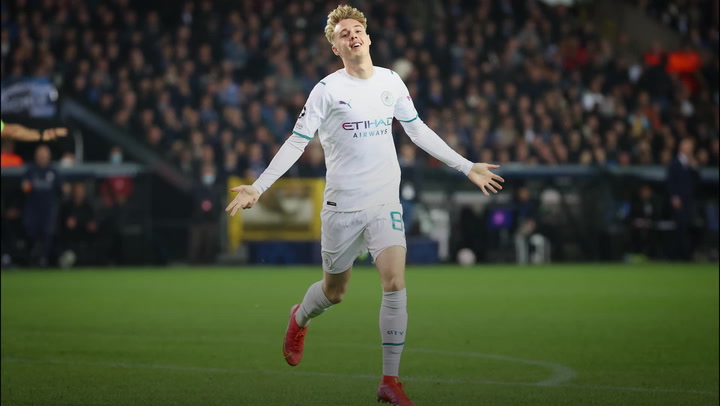 Pep Guardiola has no intention of rushing Cole Palmer

No Harry Kane? No problem.

Following this summer’s prolonged transfer tussle between Tottenham and Manchester City over Kane, the latter are proving that they will be just fine without the talismanic target man in their side.

In fact, it now seems City have another ace up their sleeve.

Pep Guardiola’s side gave Club Brugge a Champions League bashing on Tuesday night as the Spaniard continued to experiment with a false nine system devoid of an out-and-out centre forward.

And if that wasn’t enough to get City fans excited, catching a glimpse of a new face at training this week certainly will.

Brazilian prospect Kayky, who was signed from Fluminese for an initial £9million, joined in with the City first team following their Champions League triumph on Tuesday night, after linking up with his new side earlier than expected.

The 18-year-old was initially due to join City in January 2022, however the club rushed through an agreement to bring Kayky into the City fold sooner.

Having arrived in mid-September, it seems Guardiola is keen to fast-track the Brazilian teenager to the first team and, after missing out on Kane, Kayky would be another weapon in Spaniard’s vast armoury.

While City were tipped to spend big on Kane or Erling Haaland in a bid to fill the void vacated by the out-of-favour and now departed Sergio Aguero this summer, Guardiola is showing that City were right not to cave to the demands of stubborn Spurs chairman Daniel Levy.

Despite being touted to struggle more this season without a recognised centre forward in their ranks, City’s free-flowing, flexible attack is flourishing.

Could Kayky be the answer to Man City’s striker issue? Have your say in the comments.

Perhaps the days of the classic Premier League number nine are themselves numbered. Perhaps Guardiola’s side can still dominate for years to come without a recognised striker. And perhaps Kayky is the missing piece of the City puzzle, not Kane.

The whispers coming out of Manchester suggest Guardiola has a real gem on his hands and all the signs point to Kayky adding nicely to the plethora of attacking talent at City’s disposal.

“He’s very smart, very prepared. Fernandinho talks to him a lot, our captains take care of things a lot, that’s why Fernandinho is a jewel.

“Little by little he will be integrated, he will try to have matches for the second team, seek rhythm. And soon his performances will decide what to do.”

And while the Brazilian talent may need a little more time to get up to speed with the demands of English football, Guardiola has certainly bought himself some with his system succeeding.

City’s Brazilian wonderkid Kayky has been dubbed the ‘new Neymar’
(

If City storm to yet more silverware this season with their current system in place, don’t be surprised to see them abandon efforts to bring in a big name up top, in favour of a future led by Kayky and a flexible forward line.

While the City teenager has drawn comparisons to Neymar in his style of play, another Brazilian legend has tipped Kayky for greatness.

“Young winger Kayky, who has just joined Man City, has been praised highly in the Brazilian press,” Rivaldo told BetFair.

“He can become a very good player in the future but moving to English football at just 18, he will be forced to go through an adaptation process, and we shouldn’t expect to see him play much first team football yet.

“Gabriel Jesus’s presence could help the youngster and I’m confident that in a year or two he will become an important player in Pep Guardiola’s team, contributing goals and assist.”

It’s fair to say if Kayky can go on to be half the player Rivaldo was, City will have quite the prospect on their hands.