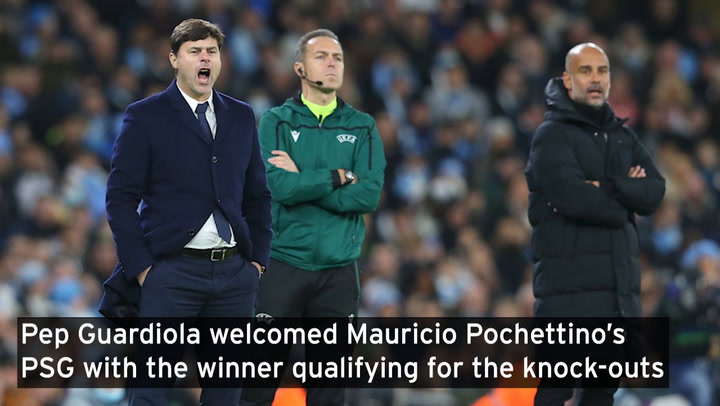 Pep Guardiola hailed his “brilliant” Manchester City side for booking their place in the last 16 of the Champions League.

City came from behind to beat Paris Saint-Germain and go through to the knockout stage as Group A winners, goals from Raheem Sterling and Gabriel Jesus sealing the victory.

Guardiola admitted his City players had learned “a good lesson” by coming from behind to win, after Kylian Mbappe had given PSG the lead early in the second-half.

“I don’t know all the stats, but I thought we were brilliant today,” said Guardiola. “In the last five or six years we’ve reached the last 16 and we’re top of the group, so I’m more than satisfied.

“It’s a good lesson. When you’re losing, you have to continue. We knew a draw was a good result for us, but we won.”

Can Manchester City win the Champions League? Let us know in the comments below!

City became the first English team since Manchester United in 2011 to top their Champions League group in five successive seasons.

Match-winner Jesus said: “We’re so happy because when you finish first in the group stage, it’s always good. PSG are an amazing team with amazing players, but we played so good tonight.

“We will try to win it. This competition is so difficult. Last year we did so well to get to the final, but we lost – that’s football. This is a new challenge and we want to win every game.”

Man-of-the-match Bernardo Silva said: “We’re very happy to win the match and go through as winners of the group.

“It was a good performance, a good win. It’s just one game, but we’re through to the last 16.

“After conceding, the team had a great reaction, but you’re never safe. You give space to Messi, Neymar, Mbappe, they can create chances.”

PSG boss Mauricio Pochettino said: “You have to give credit to City, they are a very good team.

“The important thing is to qualify. We beat City in Paris, we lose here. The difference is the draw against Leipzig and that’s why we finish second.”

PSG have also qualified for the last 16 of the Champions League following RB Leipzig’s 5-0 victory against Club Brugge.

Speaking ahead of the game, Pochettino hailed Guardiola as the best coach in the world. “It’s always amazing to come back to the city where I play one of the biggest teams in the world Manchester City,” said the PSG boss.

“It’s always a massive challenge, hopefully, it’s a really amazing game we have again… they are one of the best teams over the last few years.

“We are contenders, we are dreaming of winning the Champions League in Paris and, yes, I think we will have a tough game to qualify.

“It’s always an amazing challenge to face Pep and for me he’s the best coach in the world. I love the football he tried to show at every club he’s been at.”