An academic has been forced to abandon research into how penis size affects a man’s life after participants submitted pictures of cartoon characters instead of their genitals.

Alicia Walker, an assistant professor of sociology at Missouri State University, cancelled a study which sought images of more than 3,600 penises.

She said the “the public reaction to the project” meant “the reliability of the study as a whole has been compromised”.

Ms Walker had appealed for men to submit pictures and measurements of their members as part of research into how perceptions of penis are linked to physical and mental health, sexual activity, self-esteem, condom usage and social interaction.

What is ‘big dick energy’ and how do you know if you have it?


Participants were required to carefully follow instructions when measuring their erect and flaccid penis from public bone to the tip, as well as complete a survey.

”The kind of work I do is not for everybody,” Ms Walker told the Springfield News-Leader last month after launching the study. “These are not sexy pictures. These are clinical pictures.”

Initial submissions suggested “a lot of anxiety and a lot of low self-esteem related to size,” Ms Walker said.

But she was forced to halt the research after it made headlines around the world and led to her being bombarded with hundreds of submissions a day, many with “joke answers” to the survey.

“I made this decision voluntarily,” Ms Walker said, in a statement issued by her university.

The professor said some men admitted they had uploaded cartoons such as Spongebob Squarepants instead of pictures of their penises “to throw the study’s findings into jeopardy.”

She blamed “inaccurate and irresponsible” media coverage – some of which described her as “soliciting dick pics” – for skewing the data pool.

Ms Walker said many articles had depicted her as looking to prove that small penises lead to low self-esteem, meaning she received too few submissions from men who who were above average.

“The widespread misrepresentations in the media and clickbait inflammatory headlines robbed these men of their chance to talk about their experiences. And while some think it doesn’t matter, it does,” she said in a seperate interview with the Inside Higher Ed website.

“One man who had finished his interview with me told me he had not been to the doctor for a physical in close to a decade. After our interview, he went to the doctor. For him, and others like him, that’s huge. This work mattered.”

Ms Walker said she also received abusive emails and calls from “a small minority” of men criticising her doing the study as a woman.

“I asked why my gender made a difference, and none of them could tell me. Knowing that these folks wouldn’t have said anything had I been a male researcher was beyond frustrating,” she added. 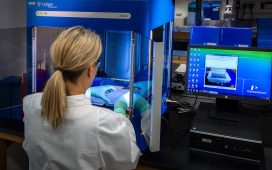