Pelé is said to be recovering following reports he had re-entered an intensive care unit at São Paulo’s Albert Einstein Hospital in an apparent deterioration of the three-time World Cup winner’s health after he left the unit earlier this week.

ESPN Brasil reported on Friday that Pelé was readmitted to the ICU due to acid reflux. The 80-year-old had a colon tumour removed this month and stayed in the hospital for further monitoring.

According to a statement released by Pelé’s doctors later on Friday, he is stable and recovering, something his daughter also insisted is the case. Writing on Instagram, Kely Nascimento said: “He is recovering well and within normal range. Promise! The normal recovery scenario for a man of his age after an operation like this is sometimes two steps forward and one step back. Yesterday he was tired and took a little step back.”

A star for Santos, Brazil and the New York Cosmos, Pelé is one of the greatest footballers of all time. He burst on to the international stage as a 17-year-old in 1958, scoring six times in total and twice in the final as Brazil won the World Cup for the first time.

Brazil retained the trophy in 1962, though Pelé missed much of the tournament through injury, and won it once more in Mexico in 1970, Pelé on that occasion opening the scoring against Italy in the final.

Santos claim Pelé scored 1,091, goals in his 18 years with the club, though the number is somewhat disputed as it includes those scored in one-off games during the tours of the 1960s.

He retired from the game in 1977, and his health has been a source of concern to family and fans latterly. He has suffered from hip problems for years and cannot walk unaided. In 2014 he spent time in the ICU due to a severe urinary tract infection.

Last year Pelé’s son said his father suffered from bouts of depression, something the star later denied. “I am good,” he said. “I continue to accept my physical limitations in the best way possible but I intend to keep the ball rolling. I have good days and bad days. That is normal for people of my age. I am not afraid, I am determined, confident in what I do.”

His public appearances were already being cut before the Covid‑19 pandemic and since then he has made few unnecessary forays outside his house near Santos.

See also  Jurgen Klopp issues injury updates on Roberto Firmino, Jordan Henderson and more ahead of Arsenal vs Liverpool
Share on FacebookShare on TwitterShare on PinterestShare on Reddit
newscabalSeptember 17, 2021 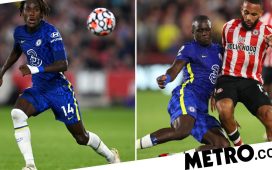