Emmanuel Macron came under fire from the French right at the weekend as Valérie Pécresse was chosen as the presidential candidate for Les Républicains, while the far-right TV pundit Éric Zemmour launched a new party and Marine Le Pen travelled to Poland for a show of force with the Polish prime minister and other European populist parties.

Pécresse said her “mission” was to stop Macron. She called him a “zigzagging” president who had “run France into the wall with debt and taxes, a society where there is no more respect or authority”. In her first interview, with the Journal du Dimanche, she said Macron had saddled future generations with a wealth of problems including “debt, commercial deficit, taxes, struggling public services [and] a chronic crisis of authority”. She added: “France is damaged and divided, everything has to be repaired.”

Pécresse will on Monday travel to the southern French heartlands of the hard-right deputy Éric Ciotti, who she beat in the primary final and who on Sunday piled pressure on her to prioritise his hardline policies on immigration and tax in order to win voters back from the far-right’s Le Pen and Zemmour.

The left’s Jean-Luc Mélenchon held a vast presidential campaign rally calling for an urgent show of “strength and unity” from leftwing voters in France, insisting that the nation was not lurching to the right after opinion polls in recent months have suggested greater support than ever for far-right candidates and hardline anti-immigration rhetoric.

The centrist Macron is likely to announce a re-election bid in January or February ahead of April’s presidential election. But this weekend’s choice of Pécresse as candidate for Nicolas Sarkozy’s party, Les Républicains, immediately ramped up the election campaign.

Macron’s government spokesperson, Gabriel Attal, told Le Parisien that there was no clear political line inside Les Républicains and that Pécresse would have to do political “acrobatics” to try to keep together all the “antagonistic” party views. He said the right was in “existential crisis” and argued that Macron’s transformation of the labour market, lowering of taxes and creation of police jobs meant “we have done everything that Pécresse could have done when she was minister [under Sarkozy], but which she didn’t do”.

Meanwhile, Zemmour, a far-right TV pundit with convictions for inciting racial hatred and no previous political experience, held his first campaign rally in an exhibition space 20km north of Paris in Villepinte. There were street demonstrations against him by trade unionists in Paris as well as scuffles inside the rally itself after several people protesting against Zemmour took off their jackets in the audience to reveal anti-racism T-shirts.

Zemmour announced he was forming a new political party named Reconquête, which means “reconquest”, as he vowed to save “the destiny of French civilisation” against what he called the threat of migrants.

He attacked the political system and the media, promised to raise wages for low-salary workers fed up with the boss-class getting rich, and promised “immigration zero” if he came to power.

The 63-year-old polemicist has been attacked by historians for claiming the Nazi collaborator Marshal Philippe Pétain saved French Jews rather than aiding their deportation to death camps. He has been described by the French justice minister as a dangerous racist and Holocaust denier.

On stage, he denied he was a racist or misogynist, saying he was a lone defender of “free speech”.

Before the rally, several hundred people joined a demonstration against Zemmour in Paris which was led by trade unions with banners saying “Zemmour out” and denouncing him as racist.

Simon Duteil, spokesperson for the Solidaires trade union, said it was important to show people would stand up to the “advance of fascism”. A total of 48 people were arrested at anti-Zemmour protests in Villepinte and Paris.

It was a sign of the divisiveness of the presidential campaign that while Jacqueline Mourad, a key Brittany figure of the gilets jaunes (yellow vests) movement, took the stage to support Zemmour, at the same time another figure from the gilets jaunes was arrested for protesting against Zemmour outside the rally.

Pécresse said of Zemmour: “In the history of France, people who divide have never been the savours. Merchants of fear do not bring solutions.” She said her party was the only “credible alternative”.

Mélenchon urged leftwing voters to unite behind him. The left is splintered into several different candidates, including the Socialist mayor of Paris, Anne Hidalgo, and the Greens’ Yannick Jadot, with polls showing that division is stopping any candidate reach the presidential final round.

“France is not the far-right,” Mélenchon said. “France is its social security system, public health, emancipation, school, research and sharing.” The situation in France was “volatile” he told Le Parisien – saying the left would make it through to the presidential final if working-class neighbourhoods turned out to vote. 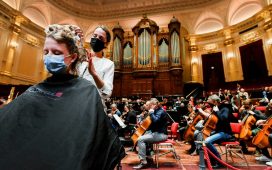 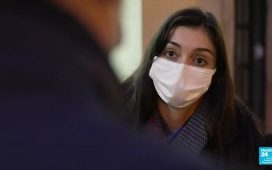