The PDC World Darts Championship quarter-final line-up is set after a string of fine performances on Wednesday, with Dave Chisnall the surprise star of the fourth round.

The Belgian averaged 102.17 to Chisnall’s 101.76, but the Englishman’s doubling was immense, finishing with a 50% ratio on the outer ring.

Chisnall’s reward, on his second trip to a PDC World Championship quarter-final, is a clash with world number one Michael van Gerwen, who came through an epic against Joe Cullen on Tuesday, winning 4-3.

Also emerging from Wednesday’s skirmishes were Gerwyn Price and Dirk van Duijvenbode, who progress to the last eight.

Price was expecting a stern examination from the in-form Mervyn King, but it did not really emerge and the Welshman picked up a relatively comfortable 4-1 win.

‘Mervyn wasn’t quite as good as he has been in the last few weeks and I took advantage,’ said the Iceman after averaging 97.71 for the win.

‘I just did what I do best and finished well. I never felt under pressure. I hit at the right time and he missed at the wrong time.’

Price will meet the resurgent Daryl Gurney in the quarters after Superchin ousted Vincent van der Voort in the last 16.

Van Duijvenbode will compete in the last eight for the first time after recovering from 3-1 down to Glen Durrant to win 4-3 on Wednesday at Alexandra Palace.

The Dutchman sets up a tasty quarter-final meeting with Gary Anderson after landing nine 180s and a 170 finish against Duzza and edging over the line in a last-leg decider.

‘I felt like I was better than Glen for most of the match and found myself 3-1 down,’ said the 28-year-old.

‘I would have been devastated to have lost but I had to make sure I didn’t get too frustrated. I dug deep and I won.

‘I kept believing in myself like I always do. I think I hurt him with the 170. I was pretty nervous for a lot of the match to be honest but that is good thing and I managed to use it in a positive way. I enjoyed the match and I’m really happy to be through.’

The other quarter-final was not being tipped by many at all as Krzysztof Ratajski takes on Stephen Bunting in the last eight, with the Pole squeezing past Gabriel Clemens and the Bullet beating Ryan Searle, both by a 4-3 score line. 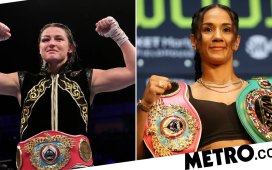