Arsenal were ‘lazy’ in tying Pierre-Emerick Aubameyang down to a new long-term deal and made the 31-year-old the club’s top earner because they ‘panicked’.

That’s the verdict of former Arsenal midfielder Paul Merson, who believes Aubameyang’s performances have nosedived since he was given the contract.

Aubameyang had entered the last year of his deal with the club when he penned a new three-year deal at the start of the season and he’s the club’s top earner following Mesut Ozil’s departure.

The Gabon captain was keen on leaving the Gunners before Mikel Arteta’s appointment but the Spaniard convinced Aubameyang to stay after a brilliant run last season that saw the side lift the FA Cup.

But this season has been far less productive for Aubameyang and his campaign was summed up with a sub-par display in a 3-0 defeat against Liverpool on Saturday.

Merson believes Aubameyang is offering very little to the side other than his ability to put the ball in the net and says the club panicked in handing him a new deal as they feared he would leave for free.

‘It was another difficult night for Pierre-Emerick Aubameyang,’ Merson told Sky Sports.

‘I’ve always said, and I’ll stick by it, unless he scores a goal he’s not bringing much more to the party, and he never has.

‘He’s an out and out goal scorer, who plays out wide, and when you play out wide as a footballer, you are working on scraps. You either get the ball so many times you get sick of it or you never see the ball at all, and he’s a goalscorer.

‘He’s a bit like Mesut Ozil without the goals. He’s not going to run back and do a fifty-fifty tackle or chase the ball back and get it back for his side.

‘Goals are what he brings to the party and at the end of the day, it is the hardest thing to do, but when you are the captain of Arsenal Football Club, which is a big thing, you need to have a bit more than what you are showing at the moment.

‘His confidence is well and truly shot,but he’s a goal scorer and in a big football match against Slavia Prague he could end up on the far post and score. That’s what he can do.

‘Aubameyang is 31 now but when he came over, you thought he is absolutely lightning. However, there is one thing you are assured of in life, though, the older you get the slower you get.

‘To give him that kind of money at this stage of his career is just pure panic. It’s lazy from Arsenal. It’s a mistake they’ve made in the past too, so it’s really lazy stuff from the club.

‘Now they are stuck again, and they are in that situation where they want to try and get someone at the club, but they want to be paid the same as Aubameyang.

‘The club can’t pay that again, but he is not putting up figures that are mind blowing and it creates a problem. That’s where we start all over again and they can’t get players in.’

Aubameyang is certain to start as the Gunners take on Slavia Prague in the first leg of their Europa League quarter-final on Thursday night.

The competition is the club’s final chance for silverware this season but it carries far more significance as winning the Europa League would give Arsenal entry to the Champions League for the first time in five years.

Arsenal reached the final in 2019 but were defeated by rivals Chelsea in Baku. 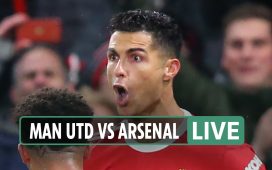