THE Imo State Judicial Commission of Enquiry on Contracts awarded between 2011 and 2019 on Monday said it uncovered fraudulent contracts worth N106 billion.

The panel recommended that those involved be made to return the money to the government.

The contracts, some of which the panel said were inflated or given to phoney companies, were allegedly awarded by the Rochas Okorocha administration.

The panel, chaired by Justice Benjamin Iheaka (rtd), submitted the report to Governor Hope Uzodimma at the Executive Chambers of the Government House in Owerri.

Justice Iheaka said: “Monumental fraud was orchestrated by the contractors in the period under review, with strong collusion with some civil servants who helped in the fraud, which is evident in over-pricing of the value of the contracts executed.”

The report says that there was a flagrant disregard for due process and the Public Procurement Act, seen in “outrageous contract pricing and shady contract executions as well as payment for non-performing contracts”.

Justice Iheaka said there was evidence of phoney companies that were used to siphon state funds.

The chairman, therefore, appealed to the governor not to sweep the report and recommendations under the carpet, but to do whatever is in his power to ensure that those indicted are made to return the funds.

The panel identified some civil servants who were honest, dedicated and resisted every pressure by the contract scammers to use their offices to defraud the state during the period under review.

Governor Uzodimma assured that all those indicted and identified in the report will be made to return the fund. 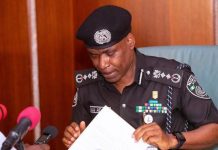