Over the moon: Marine Serre is fashion’s new queen of green 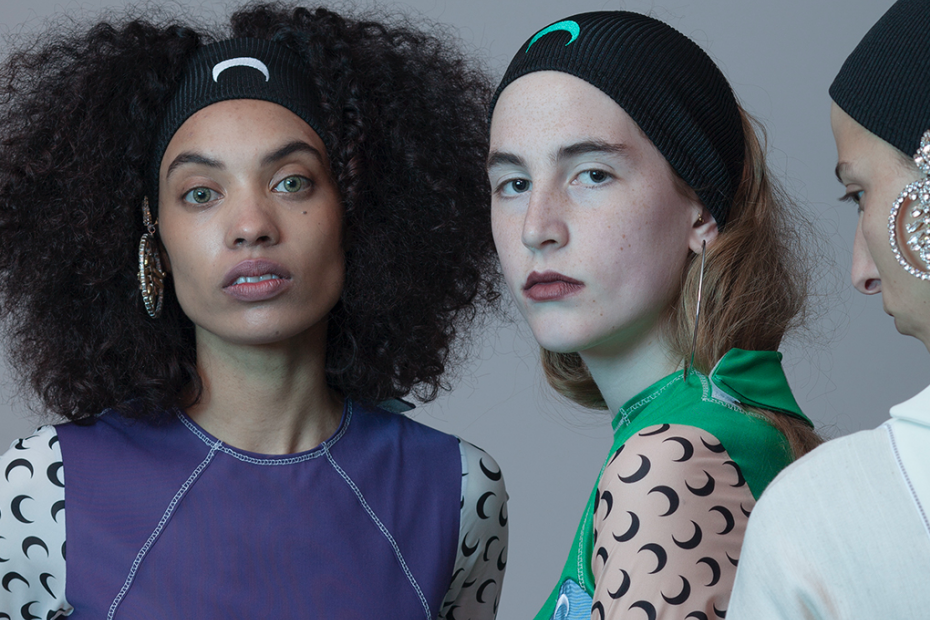 For Chanel’s autumn/winter 2017 show, Karl Lagerfeld crafted a Chanel spaceship, which launched through the Grand Palais once models had finished walking to the melody of Elton John’s Rocket Man. Sarah Burton crafted a beaded black cape embellished with a smattering of silver stars and moons for Alexander McQueen’s autumn/winter 2016 collection, which Nicole Kidman wore to that year’s Met Gala. While Christopher Kane’s resort 2011 collection, deftly named ‘Into the Galaxy’, featured images of flaring nebulae captured by the Hubble Space Telescope, which he then interpreted into a sea of constellation clothes. Orange flashes juxtaposed against black leather, like sartorial galactic fireworks.

But none can be credited for the moon’s millennial ubiquity more so than 28-year-old designer, Marine Serre. The France native gained critical acclaim for her second-ever collection, ‘Radical Call for Love’, which was created for her eponymous label’s Autumn/Winter 2017 collection. Serre designed it in the wake of the Islamist attacks in Paris and Brussels, while she was working as a junior designer at Balenciaga. Peppered throughout the collection were smatterings of her now-signature crescent moon, which was her bid to embrace a classic symbol of the Orient.

“At the time, after the attacks, it wasn’t appropriate to show a moon in the street, so my idea came from that,” Serre explains over Zoom, “but the moon is a symbol of all time, its meaning has evolved. You have it every day of your life when it’s night, you have it in astrology, and it’s a strong symbol of femininity. The fact that it’s so hybrid and has been so influential in so many times, means it’s not mine. Today it may symbolise Marine Serre, but in fifty years it may be somebody else’s.”

Despite having trademark registrations for her crescent motif rejected earlier this year (the ruling stated that the moon pattern is “devoid of any distinctive character”), Radical Call for Love led to then 24-year-old Serre winning the LVMH Prize for Young Fashion Designers, making her the youngest designer to have won the accolade. Rihanna presented her with the award and Karl Lagerfeld became her mentor, describing her in one of his final interviews as having “a will of steel”.

“I liked Karl’s irony,” she recalls, smiling, “he once told me something like I was really radical and a hard-worker, even if I look really sweet. That was nice.”

Serre is indeed really sweet; with elfin proportions and alabaster skin, her short dark hair is scraped back from her face as she sits in her Parisian apartment (“Paris is slowly getting back to normal”) which is bare to the bone except for an array of lush greenery.

Fashion wasn’t Serre’s first port of call. Born and raised in the small village of Corrèze in South West France, she left home at 14 to attend school near Limoges. It was here that she developed a love for tennis. “Nobody in my family was interested in fashion, apart from my Grandmother who was knitting pullovers but only like every Grandma. They weren’t even into art.” In 2004, after narrowly missing out on a selection for the Roland Garros tennis tournament, and once an accident rendered her out of action, she turned her attention to fashion and swiftly received an offer to study from esteemed Belgian fashion, architecture and visual arts school, La Cambre.

Upon graduating came a string of internships working under Sarah Burton at Alexander McQueen , Matthieu Blazy at Maison Margiela and Raf Simons at Dior, before scoring her position at Balenciaga, working with athleisure pioneer, Demna Gvasalia. It was during the tenure of the latter that she established her namesake label in 2017.

Its critics may struggle to find evidence of fashion’s state of address to our fractured world, but Serre is clear that her brand and politics work in tandem. “Everything is political: what you eat, what you do, how you live. Today, when you have a brand, you have a responsibility and with everything you do, it’s important to say something.”

Serre uses her brand as a conduit to do more than just say something. Fifty per cent of her brand’s pieces are regenerated from leftover material; the pieces that aren’t crafted from old fabric are made using 100 per cent recycled material.

She has eschewed fashion’s most recently adopted instruction ‘upcycling’ in favour of ‘regenerated’, noting that “there is a lot of confusion surrounding it and greenwashing is the main danger to be honest.”

“Everybody uses the word ‘upcycling’ so much so that it almost doesn’t even make sense because people think that upcycling is taking deadstock fabric and you have no way to trace it. How do you know when a material is really a deadstock?”

Her Instagram channel is awash with visuals and videos showcasing her 409,000 strong following the process behind each piece she puts her name to. “It’s important for me to show our followers how our regenerated pieces are made and the process behind them,” she explains, “What do you put on yourself everyday? Do you actually know how long it takes for that garment to be made? The complexities of regenerating it?”

Serre’s brand’s DNA is perhaps the tonic that 2020 needs; a body conscious and futuristic distraction from the turmoil of the world. The figures would agree: in the 48 hours following endorsements from Beyoncé in her 85-minute visual album, Black is King, and Adele, searches for Serre’s crescent moon print spiked 426 per cent. During the same timeframe, Google noted that searches for “Marine Serre” was its highest of the year so far. According to a report from luxury re-sale site Vestiaire Collective, Serre experienced a 1,200 per cent increase in sales over the past year: it’s now in the site’s top five sustainable brands.

“It makes me really happy when I see these moments, but nothing is ever an ending,” she states, “I don’t see them as a result of a goal in my life, they just give energy to make something new. Maybe next time, Beyoncé will wear a fully regenerated carpet dress?”

Her star might be ascending, but Serre is resolute about rejecting any trends: “I design for everyone, for the living, but I do not care about trends.”

“I’m happy that the moon top is being recognised and that it’s become a symbol of being part of something but then the next step is okay, what does that mean?”

The digital film she has unveiled at Paris Fashion Week for her Spring/Summer 2021 collection exemplifies her feelings on the state of the world. Titled Amor Fati, which translates as Love of Fate, the clip is “a reflection of what’s happening around us, everything I do is made like that: feeling around what is happening. It shows the vulnerability of the body, in terms of what’s happening in the wider world.”

She may have shunned upcycling, but Serre credits cycling itself for helping to keep her grounded. “I stay creative by biking every day to the studio, by being a normal person; that keeps me extremely creative and sensible. It’s work to do that, particularly when your life becomes a little bit more crazy and hectic, but I want to keep my feet on the ground.”

Where will Marine Serre be in ten years’ time? She laughs coyly. “I don’t know, and I don’t want to know. I want to stay free.”