The result of the confidence vote isn’t binding but it would effectively deselect him because the local party association can refuse to adopt him as a candidate for the next General Election.

The outspoken Bracknell MP would be the second Tory to lose a no confidence this year following former Attorney General Dominic Grieve.

Last night Mr Lee sent a letter to all Tory members in his constituency begging them not to deselect him.

Defending his backing for a second referendum, Mr Lee wrote: “This is not a way of delaying Brexit – I have always said that the final deal put to the people should be agreed with the EU and deliverable the day after the referendum.

“On the contrary, it is a way of bringing Brexit, one way or another, to a conclusion.

Female paedo live-streamed herself raping boy, 4, and forced him into bondage

Mum, 51, ‘choked, beaten and buried in hole’ but SURVIVES at holiday resort

CCTV shows girl, 12, just before being killed by car with dad in passenger seat

“It also secures the people’s informed consent before proceeding with the most significant changes in British geopolitical and economic policies since the Second World War.”

He added: “We now have five months to resolve the Brexit conundrum.

We can only do so by finding common ground, and delivering a solution that is acceptable to us all.” 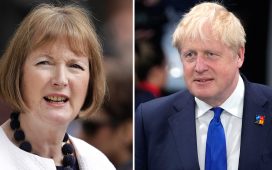