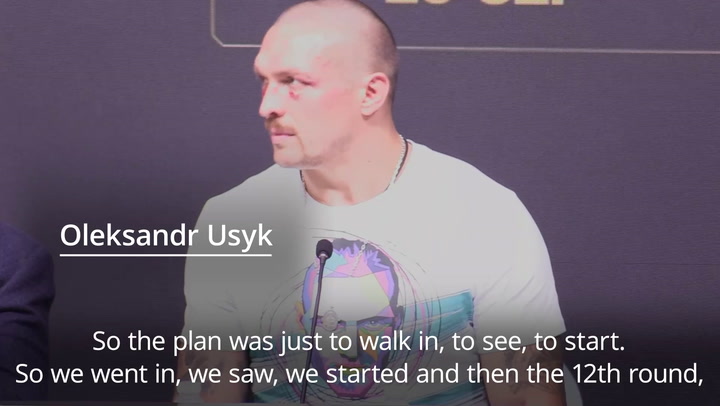 De la Hoya mocked Hearn during an outlandish Instagram Live stream where he pretended not to remember Joshua and Hearn’s names and congratulated Usyk on becoming world champion.

“I’ll tell you one thing,” de la Hoya said, before claiming to think Hearn’s name was Thomas, like the famous champion boxer.

“Because, what’s that promoter that has no clue what to do in the US? I think his name is Hearn or something – Thomas Hearn?

“Joshua vs Usyk, which nobody saw in the US because of that guy Thomas Hearn – you should stay in the UK and promote your fights.

“You have no clue what you’re doing in the US. DAZN is doing the right thing sticking with Golden Boy.

“Stay away from the US. He does not know how to promote in America – Usyk crowned himself world champion and Eddie Hearn ruined Joshua’s career.”

The pair have worked together on a number of shows in the past, most notably co-promoting a massive world title fight between Canelo Alvarez and Rocky Fielding.

Alvarez has since moved to work almost entirely with Hearn after a lengthy and awkward battle to leave Golden Boy last year.

They also both have deals with streaming service DAZN, who broadcasted Joshua’s fight everywhere but the UK & Ireland.

And Hearn has previously said that he doesn’t view de la Hoya’s Golden Boy Promotions as competition, saying that he feels Matchroom is on a “different level” globally.

“I don’t look at Golden Boy as a competitor of ours for what we’re doing on a global map,” Hearn said in a DAZN interview back in April.

Who is a better promoter, Oscar de la Hoya or Eddie Hearn? Let us know in the comments section!

“We’re on a different kind of level, it’s never personal to me, it always seems to be personal to these people.”

Golden Boy currently has a number of top world-level competitors on their books, such as Jaime Munguia and Joseph Diaz.

And perhaps most excitingly, they have unbeaten young prospect Ryan Garcia, who is expected to return soon after an absence following a mental health battle.

Matchroom, on the other hand, has deals with global stars such as Joshua, Alvarez, Katie Taylor, Gennadiy Golovkin and Devin Haney.

Joshua is already plotting his comeback, and is expected to take an immediate rematch with Usyk after losing his belts.

He has won his titles back once before, immediately rematching Andy Ruiz and reclaiming the belts in 2019 after being stopped in their first fight.

But he is the underdog going into the rematch, having been comfortably beaten by Usyk in London on Saturday night.

De la Hoya is currently working on a ring return, having been forced to pull out of his comeback fight with Vitor Belfort earlier this month.

He was pulled from the bout after being hospitalised with coronavirus, with Evander Holyfield stepping on late notice.