The Aareonakakanfo of Yoruba land, Basorun Gani Adams, on Tuesday said the South-West region was capable of preventing breach of security within its borders, assuring that Oodua Peoples Congress will not allow repeat of Owo terrorist attack in any part of the region.

Adams spoke during a visit to Ataoja of Osogbo, Oba Jimoh Oyetunji, preceding the OPC National Coordinating Council meeting, hosted in Osogbo by the Osun State chapter of the group.

The OPC National Coordinator, further stated that he was at the palace to pay homage before the commencement of the OPC NCC meeting, adding that the gathering was for the orientation of OPC members.

He then implored Yoruba monarchs to desist from giving prominent titles to non-indigenes, saying such practice was at variance with the tradition of the race.

He said, “The South-West region is capable of curbing the security deficit. OPC under my leadership will do everything within the ambit of the law to forestall a repeat of the Owo terror attack in any part of the region.

“I am pleased to tell Kabiyesi that efforts are on to build a workable synergy between the local security and the government agencies. We are ready to partner with the southwest governors to brace up the security architecture of the region.

“Kabiyesi should help tell our traditional rulers to save our tradition from going into extinction. The idea of giving prominent Yoruba titles to non-Yoruba is at variance with Yoruba culture and tradition.”

In his remarks, Oba Oyetunji, expressed worry at the rising spate of insecurity in the southwest, regretting that unfolding events, particularly, with Owo Catholic Church massacre showed evidently that Yorubaland remained target of terrorists. 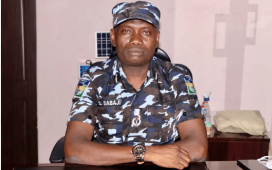 Chaos as ‘Okada’ riders clash with taskforce in Abuja