The Prime Minister’s announcement comes as he faces growing criticism of a Christmas Party, which was reportedly held in Downing Street this time last year 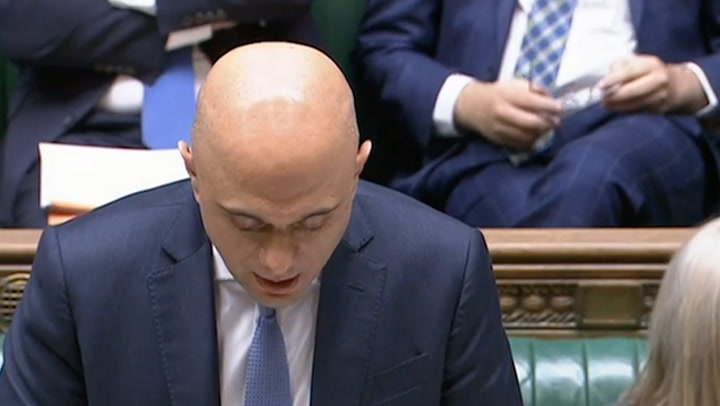 The Health Secretary has warned that the number of Omicron cases could hit one million by the end of December.

Sajid Javid issued the stark warning as he updated MPs on Plan B at the same time Boris announced the stricter new rules in a bid to slow the spread of the Omicron variant.

The new, tougher rules include working from home and covid passports for entries to large venues.

“There is still a lot to learn, but some important data has emerged recently.”

He added: “It is far more transmissible than the Delta variant.”

He said Delta cases had doubled in around seven days but for Omicron “based on the latest data from here and around the world, our latest analysis is that it’s been around, it’s between 2.5 and three days.

“This has made the virus an even more formidable foe.”

He continued: “Although there are only 568 confirmed Omicron cases in the UK we know that the actual number of infections will be significantly higher.

Currently daily infections across the UK have been above 40,000 for the last two weeks (stock image)
(

“UKHSA also estimate that at the current observed doubling rate of between two and a half and three days, by the end of this month, infections could exceed 1 million.”

Currently daily infections across the UK have been above 40,000 for the last two weeks and Omicron cases have today topped 560.

The Prime Minister’s announcement comes as he faces growing criticism of a Christmas Party, which was reportedly held in Downing Street this time last year.

“From this Friday we will further extend the legal requirement to wear a face mask to most public indoor venues including theatres and cinemas.

“As we set out in Plan B, we will give businesses a week’s notice so this will come into force in a week’s time, helping to keep these events and venues open at full capacity.”

The backlash deepened today after a video emerged last night of his staff laughing while discussing the party and how it wasn’t social distanced, despite rules in place across England at the time.

Sage member Professor Neil Ferguson, from Imperial College London, whose data was instrumental to the UK going into lockdown in March 2020, said the variant is concerning but it is still unknown what its impact will be on severe disease.

Omicron hospital admissions could hit 1,000 a day by end of the year, SAGE warns