TOKYO (Reuters) – The running segment of the Elite Womens Triathlon Olympic qualifier, held across the same course which will stage the event during the 2020 Tokyo Games, has been halved by organizers to five kilometers due to fears over extreme heat.

The race, which doubles as an Olympic test event, will start as scheduled at 7.30 am local time on Thursday but the running segment will be contested over only 5km as officials believe the conditions at the end will fall within “extreme levels”, the International Triathlon Union (ITU) said.

The swimming and cycling segments will remain the same after the ITU deemed the water quality and temperature in the Odaiba Park course to be within regulation.

With less than a year to go until the start of the Olympics, how athletes will cope with the extreme heat has been a key talking point.

Soaring temperatures have killed at least 57 people across Japan since late July, highlighting the possible health threat to athletes and fans.

Kyodo News reported last weekend that several athletes were treated for heatstroke at the 2019 World Rowing Junior Championships in Tokyo, which was another test event for Olympic organizers.

Manchester City hang on after late scare from Manchester United 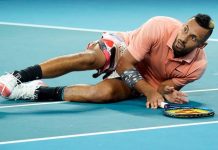 Kyrgios prevails in stormy epic to reach fourth round

Who is Pablo Mari? The lowdown on Flamengo defender nearing loan move to Arsenal 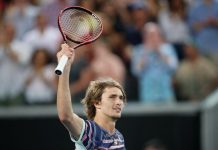 Stress-free Zverev cruises past Verdasco into fourth round

Takumi Minamino annoyed with himself after Liverpool’s win over Wolves