Benin, Oct. 3, 2020 About 14 communities hosting Okomu oil Palm Company plc in Edo have petitioned the Federal Government over alleged threat to peace by some persons posing as indigenes.

Representatives of the communities, who addressed a news conference on Saturday in Benin, asked the federal government to quickly call the said imposters to order to avoid a situation of crisis within the said communities.

Spokesperson for the communities, Chief Isaac Osasuyi, who read the text of their signed communique at the news conference, said the allegations by the imposters, who claimed to represent the interest of the communities in petitions were false.

They said the imposters, through one Sunday Ajele, had accused Okomu oil company of alleged neglect of its host communities.

Osasuyi, who noted that the petitioners were not true representatives of the communities added that “most worrisome is that the said article was purportedly signed by people who claim to be members of our communities.

“As host communities of the company in question, we are also stakeholders. As stakeholders, it is our duty to intervene when our benefactor is being harassed and maligned falsely.

“It is on this basis that we have gathered together to make the following proclamations:

“That Sunday Ajele doesn’t in any way represent our respective communities.
“That those persons who purportedly signed the petition, supposedly, on behalf of our communities are impostors.

“We are saying that the allegations are spurious, without substance and highly defamatory in their content.

“Okomu oil palm company has been the only the company in the past to assist our communities with boreholes, clinics, road grading, classrooms, books and equipment, bursaries and corpers’ lodges, to name but a few.

“The company has never in its more than 40 years gone outside of its borders onto our community’s land or done anything of the like as stated in Ajele’s petition, and we are ready to prove this, if required.
“Our communities want more companies like
Okomu oil company investing in our areas.

“We are warning people of the same ilk as Ajele, not to use false prophets and the names of our communities in vain and stay away from Okomu as they are one of a few companies that genuinely assist our communities,” he said. 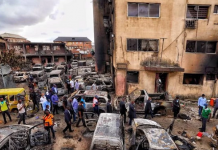