England’s exam regulator wanted to scrap last year’s A-levels but backed down rather than risk a “foolish” confrontation with the government, leading to the disastrous use of an algorithm to award grades, the regulator’s former chair has revealed.

Breaking his silence for the first time since resigning as chair of Ofqual, Roger Taylor said the regulator wanted to issue “non-qualification” leaving certificates in place of A-levels last summer, when it became clear that socially distanced exams could not be safely taken.

But ministers said GCSE and A-level grades should be issued, based on a “colossal error of judgment” that awarding grades calculated by algorithm would be acceptable to the public, according to Taylor.

Ofqual’s algorithm was scrapped after public outcry and a week of furious infighting between the watchdog and the Department for Education that culminated in grades instead being awarded on the basis of teacher assessment – a policy that will be repeated this year.

In a paper for the Centre for Progressive Policy, billed as “reflections on qualifications and the pandemic”, Taylor says it was wrong to blame the algorithm that took account of prior attainment and school performance.

“The mistakes were made by humans, not machines,” Taylor said. “The problem was not the algorithm, it was what we were trying to do with it: it was human decision-making that failed.”

Taylor claims the decision to award grades via data and algorithm by the governments in England, Scotland, Wales and Northern Ireland was initially backed by a broad consensus among the public and policymakers. But the consensus disappeared when it became clear what the consequences would be for students missing out on university places.

Taylor says policymakers were “hopelessly naive” to distribute university places “on the basis of an estimate of what might have happened if exams had taken place”. By August last year, Taylor said the initial optimism among governments was replaced by “a queasiness about the whole plan”.

The best solution in the absence of exams would have been to expand the number of places available at university to compensate: “Allowing a much larger number of students to be admitted would limit the number who were wrongly excluded,” Taylor said. “This option was, to my knowledge, never seriously considered. But by a painful, chaotic and unplanned route, it is where all four countries ended up.”

The 2020 exam debacle “has given algorithms a reputation as a mechanism for injustice” that is undeserved, according to Taylor. “It prompts the question of why exams are fair in normal times, when pupils also experience very different levels of educational support, differences that are reflected in the exam results they achieve.”

Taylor’s comments came after research found that scrapping the algorithm-based grades in favour of those awarded by teacher assessment benefited students from highly educated backgrounds. A study by academics at UCL and the LSE found that students whose parents were graduates were 15% more likely to get a better grade from their teachers last year than from the process created by Ofqual.

Charlotte Alldritt, director of the Centre for Progressive Policy, said: “The events of 2020 plunged the government into a trap of its own making. The system delivered to replace exam results merely replicated past patterns of inequality and attainment gaps between advantaged and disadvantaged children across the country, showing a blatant disregard for individuals.”

Instead, Alldritt argues: “The pandemic has shown that examination results can and should only ever be part of a wider set of information available to young people, employers, education providers and policymakers.” 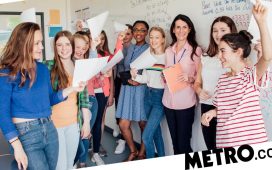