Damian Lawani is the initiator and pioneer founder of the defunct Obaseki Shaibu Movement (OSM), Edo State, also former House of Assembly member and immediate past Commissioner for Youths and Special Duties. He spoke to OJIEVA EHIOSUN on a number of political issues in the state.

With the present development in the state, would you say political godfatherism has finally been put to rest in Edo State?

Yes, a lot of people have been demystified politically in Edo State by the victory of Governor Godwin Obaseki and the victorious outing of the governor at the just concluded certificate forgery case at the Supreme Court in Abuja. The Supreme Court victory is significant in many ways to Edo people. First is that it has brought godfatherism to an end in Edo State. It has brought to an end a situation whereby many people, simply because of their positions in the society, want to turn themselves to semi-gods. It has also brought to an end a situation where people would be denied their votes and their rights to be voted for. It has finally opened the eyes of the electorate in deciding their fate and future. As you can see, those things put together showed that Edo people have decided to move the state forward by selecting their choice of leaders.

Well there are official means of communication between the government and the people. Until that official means are explored we cannot say that there is an apology. There is no congratulatory message yet because the channel of communication is not proper. It is like a rumour or hear say. So, if there is need for Oshiomhole to send a congratulatory message and apology to the governor and Edo people, it should be done properly and officially. Having been a former governor, he knows how to go about it. There must be a former letter duly signed and sent to Mr. Governor. Then, Mr. Governor will acknowledge and also send a reply because governor Obaseki that I know is interested in peace. He attends to all files on his table and treats them accordingly.

The crisis in the state PDP is getting worse by the day, how do you think this can be resolved?

Politics is about contest all over the world and the people in the PDP are very much aware that they have not won any election for the past 14 years in the state. Our coming into the party to join forces with them made it possible for us to have overwhelming victory. Again, that is not to say that there are no issues, but I think the governor is capable of resolving them. I don’t believe that there are old and new PDP members, once you are a member of the party you are a member. With the PDP in power right now, I don’t see the need for infighting among the members. Governor Obaseki is the head and leader of the party, and once he speaks that is the end. If he says he wants harmonisation of the party, so be it and nobody in the party has the power to resist it because it is where the governor goes that the party goes.

Will you say the governor is capable of reducing insecurity in the state?

The primary responsibility of any government is to secure the lives and properties of its citizens. So for our governor, I think he is not doing badly in that area. He is very much alive to his responsibilities as the chief security officer of the state. Obaseki is highly committed to the overall wellbeing of the people. You can see the security architecture put on ground by the governor, otherwise known as state police. Their local name is Vigilante Group, they are doing marvelously well. They are equipped, and they are everywhere in the state. You will agree with me that criminal activities have reduced drastically in the Edo State since the governor inaugurated vigilante in the state. Governor Obaseki knows what to do to ensure that sound economy is hinged on security. There cannot be a meaningful development in a country or state where the security network is porous. This is why the governor is doing all within his powers to ensure that Edo is secured. The governor knows what to do to make sure that the economy of the state is given adequate security check. It is that security check that will usher in investors who will expand, develop and create jobs because government alone would not be able to provide these jobs. If there are jobs, the rate of criminal activities will be reduced and eradicated from our society and it will also put an end to youth restiveness and hooliganism.

What machinery has the state government put in place to ensure that these boys who have guns do not use them for negative purposes?

They are given guidelines, they also have their leaders who report to the government on their activities. That is a new system that has just been put in place, though we are not there yet. You know also that there will be training and retraining of the personnel. I do not think they would do what is not expected of them. But from what we have seen so far, it is yielding positive results, which is why Edo State is calm and peaceful. The most important thing is that the process has started, we may not be there yet, but with time we would get it right, we will correct the mistakes as we move on. Also, Edo people need to commend the governor for the initiative. 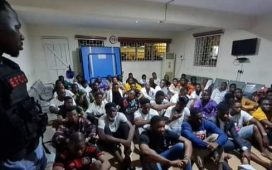