(Reuters) – Nvidia Corp (NVDA.O) on Thursday forecast first-quarter revenue above Wall Street expectations despite a hit of $100 million from the coronavirus outbreak, sending its shares up nearly 7% in extended trading.

The company, which reinforced expectations of a rebound in chip demand, is the second chipmaker after Qualcomm Inc (QCOM.O) to warn about a potential impact on its businesses due to the outbreak.

The virus has so far killed 1,367 people, infected about 60,000 people on the Chinese mainland and spread to at least 24 countries. It has led to lockdown of cities and factory closures that have disrupted supply chains.

The Santa Clara, California-based company said it expects current-quarter revenue of $3 billion, plus or minus 2%, the midpoint of which is above analysts’ expectation of $2.86 billion, according to IBES data from Refinitiv.

Revenue from its gaming business, still the biggest contributor to sales, rose 56% to $1.49 billion, but fell short of analysts’ estimate of $1.52 billion, according to FactSet.

Total revenue in the quarter rose about 41% to $3.11 billion, above analysts’ estimate of $2.97 billion, according to IBES data from Refinitiv.

(This story corrects date for end of fourth quarter to Jan. 26, not Dec. 31 in penultimate paragraph)

Reporting by Amal S in Bengaluru and Stephen Nellis in San Francisco; Editing by Sriraj Kalluvila 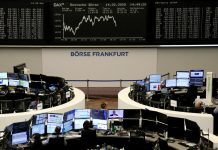 A bit of perspective on Ireland’s election upset