Declan Rice has insisted he remains happy at West Ham despite turning down two contract offers this year.

The England midfielder, a target for Chelsea, Manchester United and Manchester City, wants to play in the Champions League and has shown little interest in committing his long-term future to West Ham. Rice has three years left on his deal, with the option of another year, and has so far rebuffed the club’s attempts to fend off his suitors by giving him a lucrative new contract.

The 22-year-old, who is set to captain David Moyes’s side when they host Rapid Vienna in the Europa League on Thursday night, said that the speculation on his future had not affected his focus. Rice scored a brilliant goal in West Ham’s victory over Dinamo Zagreb in their Group H opener and was upbeat when asked whether the club could convince him to stay.

“I think you could see a difference if I wasn’t giving 100% but every time I’m putting on the shirt my only objective is to give everything for the club.”

Rice suggested that West Ham, who would not consider selling him for less than £100m, can match his ambition. “We can achieve good things,” he said. “Last season we finished three points off the Champions League.

“The mentality around the place is that every competition we’re entering is that we can go on and win. This is a new one we’re entering and we want to win that. To the fans, you can see how happy I am on the pitch.”

Moyes said he never worried about Rice’s attitude. “I don’t like saying it in front of him but he’s arguably one of the best young midfield players in Europe, if not the best,” the manager said. 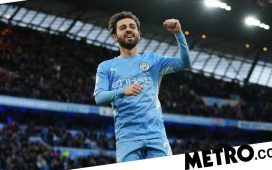