NEWSCABAL
NEWSCABAL > finance > Not gone yet: Merkel to hang on as active caretaker
finance

Not gone yet: Merkel to hang on as active caretaker 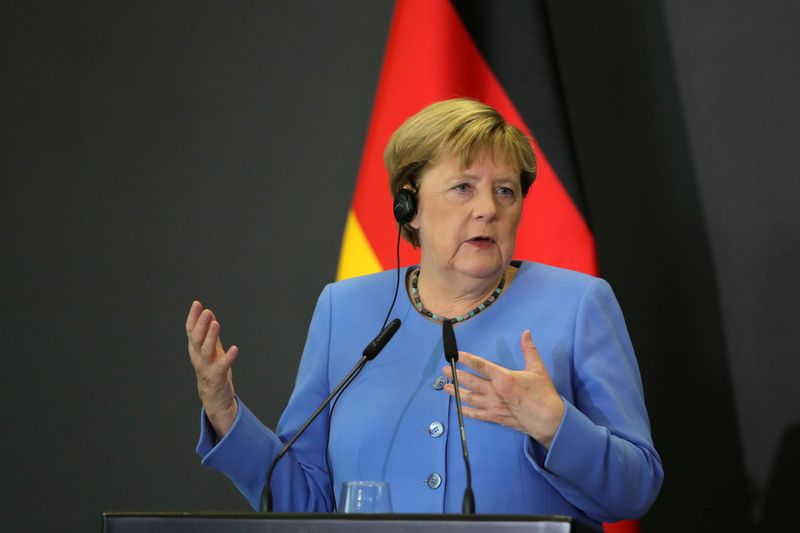 BERLIN (Reuters) – After 16 years in power, Chancellor Angela Merkel is not seeking re-election in Germany’s Sept. 26 election but she is anything but a lame duck.

The likelihood of protracted coalition talks after the vote means Merkel will not be leaving office any time soon and she fully intends to use her time after the election to press on with foreign policy initiatives, government officials say.

Under the German constitution, Merkel will remain chancellor until a majority of Bundestag lawmakers elects a successor, who is then sworn in. There are no formal restrictions on her powers in this time, though Merkel is a consensus seeker and previous chancellors have not taken radical decisions during the window.

Ukraine and European Union climate talks are two issues in her sights.

“She will have to play an important role, because everybody in Berlin will be involved in the coalition talks,” a leading conservative in Berlin said of negotiations on the EU’s climate protection plans.

Armin Laschet, Merkel’s would-be conservative successor, and Greens co-leader Robert Habeck both expect coalition negotiations to run for the rest of the year. After the Sept. 24, 2017 election, they went on until the following March.

A fractured vote means coalition formation could be more complicated this time, meaning Merkel could easily surpass her former mentor, Helmut Kohl, as the longest-serving post-war chancellor – a record she would set on Dec. 17.

Such a scenario would give Merkel the chance to broker a new round of so-called ‘Normandy format’ talks with Russia, Ukraine and France in an effort to quell the conflict in eastern Ukraine – negotiations she pushed for during a trip to Kyiv last month.

“I advocate working on having another meeting at the political leadership level with myself, the French president and of course the Russian and Ukrainian presidents,” she said during that trip, making clear this could happen after Sept. 26.

One person is especially nervous about her future role: French President Emmanuel Macron.

French diplomats say they are worried that coalition talks could drag on into the first half of next year, when Macron will need a strong German partner both to champion his European agenda during France’s rotating EU presidency and when he faces French presidential elections.

“In that case it would be even best for Macron if Merkel remained in office until the presidential election in April 2022,” said Claire Demesmay, France expert at the DGaP German Council on Foreign Relations.

Merkel and Macron’s governments have been scoping out what they can agree during the French EU presidency, and a productive tenure would boost Macron’s re-election chances, Demesmay said.

“It would be very bad for him if a new coalition were to form at the beginning of 2022 – because the German partner would then be largely absent for agreements,” she added.

Merkel has already indicated she will have a role https://reut.rs/3iDbNT7 to play beyond September in the EU’s climate protection plans, entitled “Fit for 55”.

Saying tough negotiations on this could begin while a new German government was being formed and she was still acting chancellor, she said in July: “We want to make sure we have a good handover.”

Her aim is not only to defend German interests.

Dubbed the “climate chancellor” in 2007 for championing the issue with Group of Eight leaders and for pushing through a switch to renewable energy in Germany, Merkel wants the EU to move faster on climate protection.

One EU diplomat, who declined to be named, said the bloc could use Merkel in the room during talks, even if the business end of negotiations on “Fit for 55” policies will be next year.

“The question is: without Merkel in the room, are we going to be able to solve them (the negotiations on climate policies)? I think we can … but it will definitely become more difficult,” the diplomat added.