The scene of the explosion. PHOTO: ISAAC TAIWO

Integrity tests to be carried before route can be opened, says NEMA

Tragedy was averted yesterday when a tanker with registration number FKJ-999XX conveying 44,000 litres of diesel crashed with another trailer and discharged its contents, which led to an explosion at Toyota Bus Stop.

It, however, caused heavy traffic for many hours on both sides of Oshodi-Apapa Expressway in Lagos. It occurred opposite the Lagos State Fire Service Station located in the area, which led to a prompt intervention of the fire service personnel.

According to eyewitnesses, the accident occurred when a diesel tank fell off from a truck going from Oshodi to Apapa and exploded on the highway. No life was lost in the explosion and only the tank was burnt while the truck head was not torched.

The explosion, which occurred around 9:05a.m. left the entire stretch from Oshodi, Isolo, and Airport Road in a traffic mess and the scene was cordoned off to motorists until the truck was evacuated from the road.

A team of Lagos Fire Service and policemen, who were on ground battled to quench the fire and control traffic as they directed vehicles to service lanes on both sides of the expressway.

It became more problematic for motorists as the Murtala International Airport road bridge at Toyota Bus Stop was barricaded by policemen as a result of the fire burn that affected it, which they said was not safe for vehicles to use.

The National Emergency Management Agency (NEMA) has, however, said the structures at the Oshodi-Apapa Expressway where the explosion occurred, has been “badly affected” and would be subjected to integrity tests by the Federal Ministry of Works before the route can be opened to motorists.

Giving an update on the explosion, Ibrahim Farinloye, the Acting Zonal Coordinator, South-West Zonal Office, said the road has been strongly affected based on assessment and would require urgent attention before use.

“The road structures are badly affected. Efforts are on to carry out integrity tests on them, especially the pillar of the bridge linking the Airport from Apapa-Oshodi way,” Farinloye said.

The coordinator had earlier said that the fire incident occurred when the tanker, laden with diesel, crashed on the side with another trailer loaded with iron rods, while in motion. “The two trucks were trying to outsmart each other on the road, which led to one of them hitting the other by the side, leading the tanker to separate with the head.”

An eyewitness, Segun Adegboyega, said: “It was swerving on the road and it seemed the driver did not know how to stop the tanker. As soon as it got to this spot, the tanker removed from the truck. It looked like the trucks were struggling for the road. After the explosion, we couldn’t find the drivers of the two trucks. After the tanker fell off, the erring truck driver took the service lane and sped off.

“Immediately it happened, OK Foods workers came out to douse the fire with their company’s extinguisher, then fire fighters responded when the bridge was already on fire. If not for the fire fighters, the bridge would have reset.” 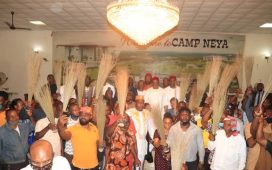