No dignity, no future: Boris forsakes leadership to protect Cummings


Look on the bright side: at least we’ve had it confirmed who is actually running the country these days. And it isn’t the prime minister. Boris Johnson is no more than Dominic Cummings’s sock-puppet. A fairly shabby one at that. The reality is that without Classic Dom, there could be no Boris. All that Boris really amounts to is a parasitical ball of compromised ambition fuelled by a viral overload of neediness and cowardice. There is no substance or dignity left within the prime minister. His only instinct is his own survival.

The equation was quite simple. If Dom was to be fired, then Boris would have to fire himself, because it is inconceivable that the ersatz prime minister didn’t know the de facto prime minister had broken the lockdown rules by doing a runner to Durham. But just in case Boris had been in any doubt, Dom had arrived at Downing Street four hours before the daily coronavirus press conference to remind him who was boss. There were to be no sackings and no resignations. Not yet anyway. There may be in the days to come.

Not that Boris had actually wanted to front up the No 10 briefing. It was just that every other cabinet minister had phoned in to say they were self-isolating in their second homes. Or in Robert Jenrick’s case, his third home.

Right from the off, Boris had looked rattled. The self-styled great communicator has lost the power of language and can now only talk in staccato bursts of incomprehensible Morse code. Even more disastrously, he is the populist politician who has lost track of the mood of the people. His survival skills have deserted him. The country is spitting blood at the arrogance of one rule for the elite and another for the rest, and Boris is totally oblivious.

Breathless and pasty-faced, his eyes still bloodshot after his talking-to by Dom, Boris leapt to his boss’s defence. He hadn’t been able to throw a protective ring around care homes, but he sure as hell was going to throw one round Cummings. Classic Dom had done nothing wrong at all. In fact, he had done what any father would do and drive to his second home. Mostly because he was so short of friends that he had no one within a 260-mile radius who could leave food parcels for his child. Oddly, that was one of the few statements that sounded vaguely convincing.

The rest of his opening remarks were incoherent drivel. Dom had driven the length of the country to escape the virus. Even though he was taking it with him in the car and almost certainly contracted it during the enclosed proximity to his wife. It was as though Boris thought the virus could only travel at 50 mph, so if Dom drove at 70mph up the M1, then he could outrun it.

Dom had had no alternative. Indeed, if the de facto prime minister had a fault, it was that he loved his family too much. All those single mothers and workshy parents without second homes were basically heartless and uncaring for staying put and obeying the government advice on self-isolation. Dom: the man who loved too much.

Boris then wittered on a bit about schools – mysteriously, he seemed to forget the dualling of the A66 that Grant Shapps had been so desperate to talk about during the morning media round – but all the questions concentrated on how and how often Dom had chosen to arbitrarily break the rules. Here Boris started to get sweaty and petulant. He was standing by Dom and that was that. He didn’t have to give a credible reason because he was the World King who wrote all the rules.

Bizarrely, he even described Dom as responsible. Cummings won’t be at all happy about that. His whole self-image is based upon him being the great anti-establishment disruptor; the person to whom rules don’t apply. Not some establishment posh boy who toed the line at all times. God save the Queen! Her fascist regime.

Then Boris was unwittingly making sure that both he and Dom had no future. The press conference he had hoped would draw a line under Dom’s midnight – no toilet or snack breaks – flits to his hideout merely served to ensure they would dominate the news agenda for weeks. Boris had had a chance to show genuine leadership and completely flunked it.

He refused to answer any questions about whether he knew Dom had done a runner – just imagine Boris working from Downing Street imagining his host body was holed up in north London – or when he discovered that Dom was in Durham. Not because he didn’t know, but because he genuinely thought it didn’t matter. Boris is a true believer in his own exceptionalism, a trait that he graciously extends to those who are close to him. He genuinely doesn’t see a problem with not obeying a rule himself that he has asked the rest of the country to follow. So what if Dom and his family might have risked infecting a few dozen inconsequential little people? Sacrifice is what other, lesser people do. Nor was there even an attempt to answer the allegations about Dom’s other alleged extracurricular outings to Barnard Castle or the bluebell woods.

In saving Dom – for the time being at least – Boris had tossed away the credibility of his own government. He has been stripped bare and exposed as not very bright, lacking in judgment and completely amoral. Within an hour, he had not only defended the indefensible, he had basically told the nation they were free to do as they please. If there is a second coronavirus peak, Boris will have even more blood on his hands. He’d even made Shapps’s TV appearances look vaguely statesmanlike. That bad. At a time of national crisis, we have a prime minister who makes Henry Kissinger look worthy of a Nobel peace prize. Satire is now dead. 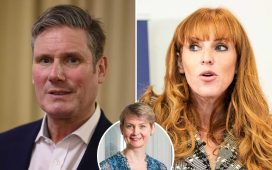