The National leadership of the Nigerian Union of Petroleum and Natural Gas Workers (NUPENG) has disclosed the 3 major reasons why it directed Petroleum Tanker Drivers (PTD) to withdraw their services from Lagos.

NUPENG revealed that the 3 major challenges that were being faced by Petroleum Tanker Drivers include; Extortion of money from the petroleum tanker drivers by various security agents, the menace of containerized trucks at Apapa, Kirikiri and Beach Land axis of Lagos State and the harassment and extortion by area boys and area godfathers.

This was contained in the press statement that was issued by NUPENG on Friday, August 7, 2020, and signed by its National President, Comrade Williams Akporeha, and its General Secretary, Comrade Olawale Afolabi.

While directing petroleum tanker drivers to withdraw its services, the national leadership of NUPENG said it cannot afford to fold its arms while its members are being consistently and continually extorted, intimidated, harassed and victimized by different groups and segments in Lagos.

On the menace of Containerized Trucks at Apapa, Kirikiri and Beach Land axis of Lagos State and collusion of government officials hindering Petroleum Tankers from loading activities at depots and tank farms;

The union said that the persistent traffic gridlock and indiscriminate parking of containerized trucks on major Lagos roads and bridges leading to Apapa port, Kirikiri, Beach Land, Satellite Town, Ijegun, are another major setbacks bedevilling the smooth running of the operations of Petroleum Tanker Drivers in Lagos State.

NUPENG disclosed that as at today, MRS depot has been held captive for more than 3 months from discharging products to Petroleum Tanker Drivers despite heavy availability of Petroleum products stockpiled in their tank farm facilities.

They explained that for safety reasons, Petroleum Tanker Drivers cannot continue to struggle with these containerized trucks in these corridors considering the inflammable nature of the products their members carry and cannot afford to undermine safety standards, procedures and protocols in the course of rendering their services.

Some of the locations faced with this situation include Oshodi/Apapa Expressway, Ojuelegba Bridge, Iponri, Constain roads, Ikorodu road through Funsho Williams Avenue (formerly Western Avenue) to Ijora inward Apapa and Oshodi-Apapa Expressway through Mile 2 to Berger Yard inward Tincan Island. These locations have been overwhelmed with indiscriminate parking of these articulated vehicles, aggravating the gridlock faced by Petroleum Tanker Drivers that ply the roads daily to lift products.

On the harassment and extortion by Area Boys and Area god-fathers; The union said that it was really worried that Lagos State which is known to be a megacity and centre of excellence has now become a safe haven for area boys and area god-fathers who now see Petroleum Tanker Drivers as soft targets, extorting money from them on a daily basis, assaulting them and vandalizing their trucks in some instances, especially when some of the Tanker Drivers show restraints in paying them illegal fees and levies.

They said that the Petroleum Tanker Drivers (PTD) now battle with both Area Boys and Area God-fathers amidst the deplorable state of the roads in Lagos State, and this is really causing PTD lots of havoc on a daily basis.

The union pointed out that a distance of just about 10 kilometres, now takes 7 to 8 hours of manoeuvres by petrol tankers, many of which break down in the process, upturning their contents, killing PTD members and endangering the lives of several other Nigerians who traverse the roads.

They revealed that Tanker Drivers whose activities cut across Oguntedo, old Ojo road, Ijegun-Egba, Abule Ado and its environs in Satellite town, Oriade Local government Area, and Apapa corridor of Lagos state have continued to work in fears, following incessant attacks by members of various notorious groups who have developed a penchant for extorting money forcefully from Tanker Drivers.

They are known for operating unchallenged and freely around Apapa, Kirikiri, Mile 2, Maza-Maza and Abule-Ado, near Trade Fair flank and so on.

NUPENG said that they decided to embark on the indefinite strike after consultations with the different leadership organs of the union and stakeholders in the oil and gas industry.

Cameroon coach Toni Conceicao is on the search for new talent 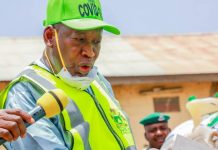 BREAKING: Over 30 people killed, as tanker collides with Keke Napep in Kogi

NAICOM to stay action in suit against insurance recapitalisation