One of the front line contenders for the position of Senate Presidency in the Ninth Assembly, Senator Ahmad Lawan, will soon unfold his detailed Legislative Agenda.

The Legislative Agenda, Abdullahi said, will contain the direction of the Ninth Senate if Lawan emerges as Senate President.

Abdullahi who spoke at the break of fast Lawan held with some senators and senators-elect in Abuja, added that the draft legislative agenda will be sent to individual senators-elect for their input before the document is unveiled to Nigerians.

In his remarks at the occasion, Lawan who is also the Senate Majority Leader, noted that he lost in the contest in 2015 because it was God’s will that his aspiration then would not materialise.

He commended his colleagues for their sacrifice and dedication in identifying with his cause, assuring that everybody would be carried along.

He said, “I am overwhelmed by the presence of everybody here. We went through this process before in 2015. And those of us who were there then knew the kind of sacrifice, commitments, dedication that everybody gave. But it was the will of God that it will not be and it was never. But we thank God for His blessings. We are still around and are believing completely in His decision not to give us at that time.

“Our colleagues here, everybody has shown commitment. We are seeking the face of God, His blessings, His mercies in this enterprise once again. We are human beings. We can only see the physical. From the physical, we can see there is a lot of successes in what we are doing. The other thing that we don’t know is what God has kept to Himself. So, we will continue to pray for God’s intervention in this matter. And let me say that this is something that I personally feel that I have obligation to each and everyone here. And in fact, even those who are not with us at this time of effort to get to that office but of course, this is our campaign.

“In an enterprise like this, someone will start something but nobody here is a joiner. Everybody is part and parcel of the campaign team. What we referred to as campaign team was the initial take-off. But everyone should continue to give his commitment and whether we call meetings or have some interactions elsewhere, it is important that everybody play their part. And that is the campaign team. It doesn’t mean that one, two, three people who are in the campaign team and every other person is not. It is completely for all of us. And I pray that God Almighty in this very Holy Month will continue to guide us, bless us and put us on the cause that will make us realise this mission and show us the path when challenges confront us. I believe that together we can achieve a lot, not only for the National Assembly but for this country.”

Over 30 senators-elect were at the meeting including, Senator-elect, Abba Moro, a former Minister and a member of the main opposition Peoples Democratic Party (PDP).

Wife sentenced to death for killing her husband in Kano

My Body Opens Doors Of Blessing For Me – Mandy Obi 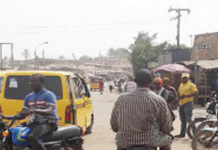 Boko Haram/ISWAP: ‘Terrorism would’ve been over if Obasanjo was president’ – Fani-Kayode