The man posed as the owner of thousands of day-old chicks lost in Imo State weeks ago.

A Nigerian man successfully scammed people on Instagram after posing as a poultry farmer and pretending to be the owner of over 3,000 day-old chicks that died in Imo State recently.

PREMIUM TIMES reported how officials of the Imo State task force on emblem and some police officers in Owerri illegally impounded a Toyota Sienna which had 8,000 day-old chicks inside it.

Over 3,000 of the chicks died inside the vehicle because of exposure to heat from the sun.

While the owners of the dead chicks were negotiating with the Imo State government for compensation, the man, Anyiam Clinton, who claimed to be resident in Aba, Abia State, took to Instagram to impersonate them and was soliciting financial assistance from unsuspecting Nigerians on the social media site. He claimed he lost 2,000 birds.

Many people bought his story, openly sympathised with him and pledged to send money to him.

At least two persons have confirmed to PREMIUM TIMES they transferred money to Mr Clinton’s account 3036605447 with First Bank of Nigeria Ltd.

A popular Instagram user, Paschal Okechukwu, popularly known as Cubana Chief Priest, unknowingly paved the way for Mr Clinton to scam the people, having bought the fraudster’s story too. Apparently, he (Okechukwu) came out, telling his Instagram followers – over two million of them – that Mr Clinton was the victim of the Owerri incident.

Mr Clinton uses the name Nnamdi Ofor (@zeefarm) on Instagram. His real name (Anyiam Clinton) was only made public on Instagram when Mr Okechukwu published it and the bank account number, while he appealed for assistance for him.

Mr Clinton does not have any photograph of himself on his Instagram page.

READ  Our Recovery From Covid-19 Pandemic Fallouts Must Be Innovative, Says Osinbajo

“This guy here @zeefarm is the owner of the birds,” Mr Okechukwu wrote on Instagram on September 19, alongside a clip of a video-call he had with Mr Clinton.

“Am so sorry for your loss @zeefarm. But I want you to know that what doesn’t kill you makes you stronger, 1 bird is sold at 550 naira. @_deangels will support you with 1,000 birds.”

De Angels, a popular night club in Owerri, is owned by Mr Okechukwu.

Mr Okechukwu appealed to “well-meaning” Nigerians to send in “whatsoever” amount of money they could to Mr Clinton’s bank account.

PREMIUM TIMES contacted Solomon Sunday, a manager at De Angels, who promised to inform Mr Okechukwu that the paper wanted to interview him over Mr Clinton’s activities on Instagram.

The manager did not call the reporter back as of the time of filing this report.

The two persons who told PREMIUM TIMES they sent money to Mr Clinton said they were taken in by the scam because of Mr Okechukwu’s post.

One of them had contacted a PREMIUM TIMES’ reporter to point out the discrepancies between the paper’s report on the Owerri incident and the claims made by Mr Clinton.

Chijioke Nicholas, the chairman, Poultry Association of Nigeria, Imo State, who made a video of the Owerri incident and also helped in negotiating for a compensation from the Imo State government, confirmed to PREMIUM TIMES Mr Adio’s ownership of the birds.

Mr Nicholas also confirmed the name of the driver who had an encounter with the Imo State task force officials as Tega Silas.

The day-old chicks were driven in a minivan by Mr Silas who was contracted by Mr Adio to supply some of the birds to a farmer in Owerri, while the remainder was meant for Port Harcourt.

PREMIUM TIMES has spoken multiple times with Messrs Adio and Silas during the paper’s previous reporting on the Owerri incident.

Mr Clinton, in his story, lied that he bought the birds from Farm Support Group in Ibadan, Oyo State.

He also lied that Farm Support “promised to refund” 700 birds to him, but that since he “got” help from people on Instagram he told the company to give the birds to “other customers”.

This kind of claim by Mr Clinton was apparently meant to get potential victims to see him as a very considerate person who should be supported.

A worker with Farm Support told PREMIUM TIMES they were aware of the Owerri incident, but that they had nothing to do with it or Mr Clinton.

Mr Clinton, perhaps not wanting to complicate his story since there may be people who would want to speak with the driver, also lied that the driver whom he said transported his birds had switched off his mobile phone “because he was scared” of the loss.

Based on the prompting from a PREMIUM TIMES’ reporter, the two persons who said they donated money to Mr Clinton engaged him in a private chat on Instagram and requested to see a receipt or any evidence of his transaction with Farm Support.

He initially told one of them he was going to make public his receipt, but later reneged on it and appeared to be uncomfortable with the probing questions from the fellow.

READ  Nigeria: Minister rules out any oil bidding round until passage of Petroleum Industry Bill

Mr Clinton, however, acknowledged the N10,000 he received from the man whom he was chatting with.

He said in the chat that Mr Okechukwu (Cubana Chief Priest) did not give him the financial help he promised. “He hasn’t given a dime. He promised he would that he has been busy and if he does, fine. If he doesn’t, fine,” he said.

“You are the only one in my inbox questioning me,” Mr Clinton said to the fellow in their private chat. “To avoid another person asking personal questions, I will make a public post once (and) for all.”

He is yet to make any “public post” more than three weeks after. In fact, he appeared to have gone underground, as he has not made any more comment since on Instagram.

“I am really heartbroken,” said Ijeoma, a woman who felt she has been scammed after she transferred an undisclosed amount of money to Mr Clinton. “God will judge him.”

Before now, Mr Clinton used to chat freely with the woman over the Owerri incident. The woman even promised to stop by his “farm” and patronise him by December.

But Mr Clinton stopped responding to the woman’s messages when she asked him of his phone number and contact address in Aba. 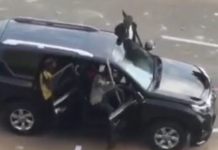