The Minister of Science and Technology, Ogbonnaya Onu, has reiterated the commitment of President Muhammadu Buhari’s administration to implementing the five-point demand of the #EndSARS protesters.

Mr Onu gave the assurance in Abakaliki on Sunday during a sympathy visit to Favour Imoha, a 300-level medical student of the Ebonyi State University (EBSU), who was hit on the head by a stray bullet during the protest in Abakaliki.

The minister said that the ‘Executive Order Five’ was aimed at industrialising the nation and appealed to the youth to cooperate with the administration to succeed in its strive to create more jobs for the citizenry.

He said that Mr Buhari was working hard to bequeath a new Nigeria that the younger generation would be proud of.

The former governor of old Abia State urged the youth to take advantage of the N75 billion victims survival fund and other federal government’s economic intervention programmes to empower themselves.

“The future is for our young people and if we don’t give them the best, what will happen in the future when they govern the country?

“The message to our youth is that your voice has been heard at the highest level and that all your demands as contained in the 5-point demands have been accepted and are being implemented,” Mr Onu said.

He cautioned the youth against indulging in violent agitations and urged them to use dialogue as a means to achieving their demands.

The minister, who regretted the magnitude of destruction of critical assets and property of private citizens by angry youth in the wake of the #Endsars protests, advised youths to adopt dialogue in resolving grievances.

READ  My transactions with Tinubu – Tambuwal

The minister prayed for speedy recovery of the victim and others who sustained different degrees of injuries during the violent protests in the state and for peaceful repose of those who lost their lives.

Mr Onu commended medical doctors at the Alex Ekwueme Federal Teaching Hospital for working hard to save the lives of the victim and others who were brought to the hospital following injuries they sustained during the unrest.

He said: “We will like to use this opportunity to say to those who carried out the Endsars protest in a violent manner that that is not a proper way to go.

“Violence is inimical to our national growth and development.

“Violence cannot help us as a nation because if we start destroying our national assets particularly when we know that we need a lot of infrastructure; no foreign investors will come and help us accelerate the process of industrialisation.

“Industrialisation will help us create more jobs for our young people, create wealth for the old and young and this cannot be achieved in an atmosphere of violence.

“Once you have violence, it introduces tension and people can no longer feel secured both for their lives and for their investments.”

Meanwhile, Godwin Imoha, the victim’s father, commended the minister for coming to the family’s aid. 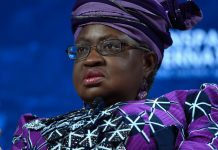